There’s been snow, strikes and over half a million VKs consumed

As we enter 2019, it's time to look back on the year full of ups and downs that is 2018. We were gifted with one hell of a Love Island season, football almost came home, and the nation fell in love with Harry Redknapp.

We started the year in Cardiff with the notorious strikes, however it hasn't been ALL bad. There's been a royal visit, sporting victories, Beyonce and Jay Z, and of course, there was a LOT of partying.

The year began with Cardiff Uni being rated one of the top 10 most beautiful universities in the UK. And who would question that? With white Georgian buildings and beautiful gardens it definitely deserves this title. They obviously haven't seen the ASSL building…

In other news, Prince Harry and Meghan Markle visited The Diff, making an appearance at the castle and waving to fans who waited hours to get a glimpse of the pair.

February saw Cardiff's Queen Street Greggs transform into a restaurant for Valentine's Day, with exquisite cuisine such as seasoned pork and puff pastry sliders on the menu. No one would ever guess what they are.

We also tested the waters in the library and tried to see how annoying we could be before stressed students noticed us. And trust us, eating a packet of crisps as loud as possible really got us some death stares. 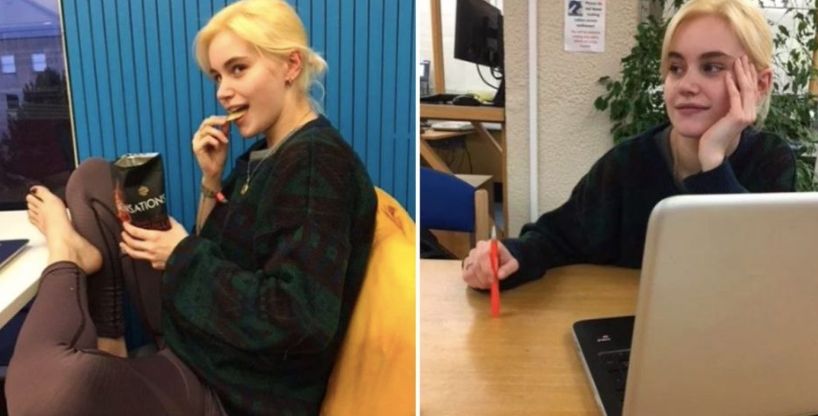 There was also a concert at the SU all in aid of refugees and asylum seekers. Meanwhile, we wore the ugliest outfits around campus and got people to rate them.

And finally, The Cardiff University Tennis Club raised over a £1,000 in the bid to help fight cancer.

Strikes and snow bombarded March 2018. The month started off with the whole of The Diff being coated with the stuff, and it was really inconvenient. Lectures got cancelled, uni buildings closed, and the nightclubs refused to open- apart from Live Lounge of course, which we're fairly sure will survive the apocalypse. 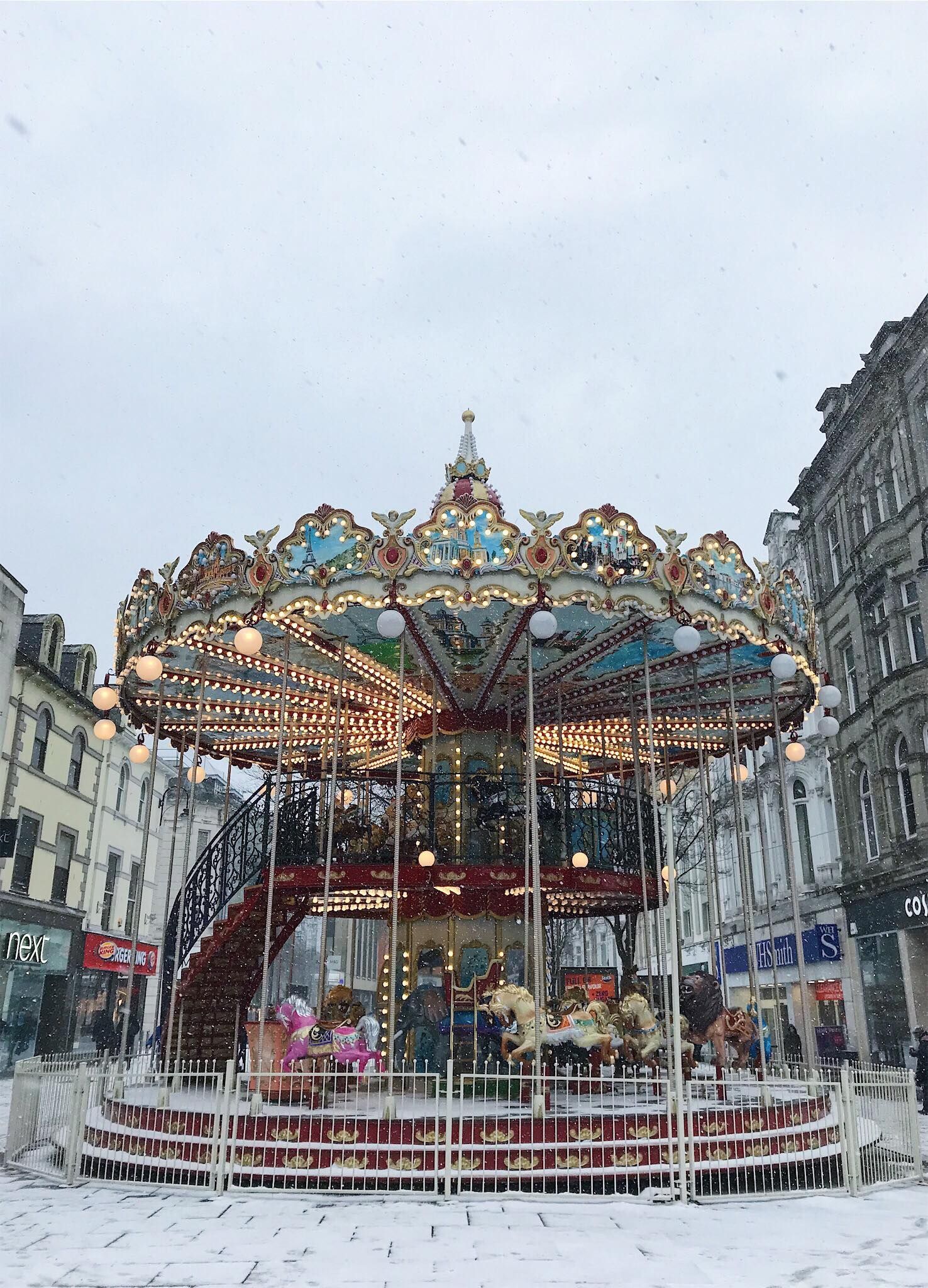 Due to an industrial dispute concerning pensions, students also endured weeks of strikes in March. However many came out in support of their lecturers and took to the streets to protest with them, with rather creative banners. 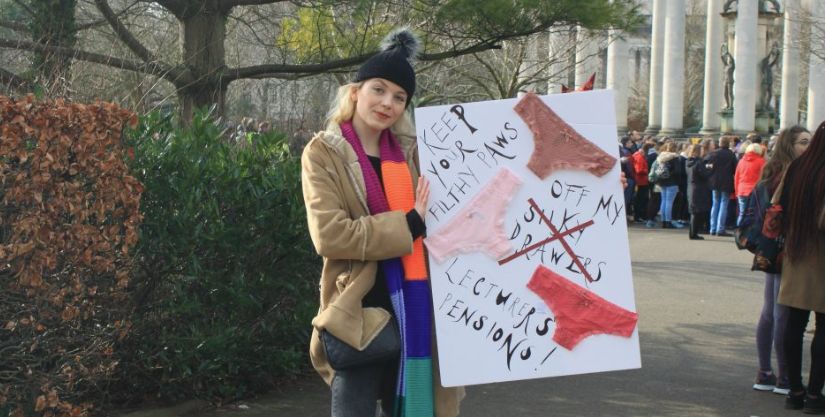 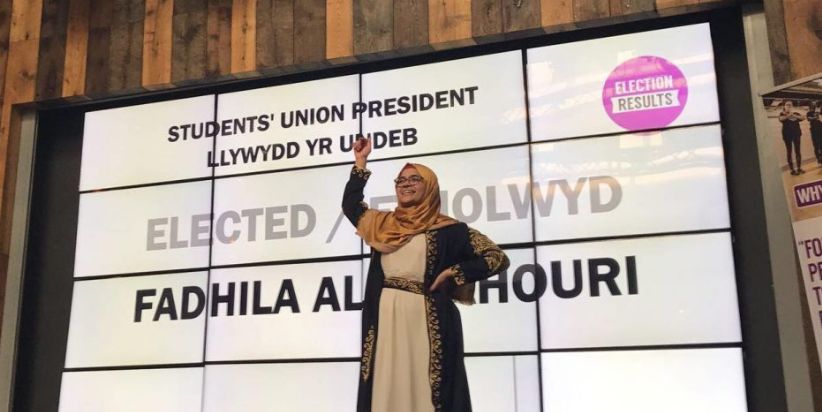 The grade II listed Main Building got graffitied after the People and Planet organisation sprayed the word 'Divest' on the walls in bright orange paint in order to campaign for fossil fuel divestment. The students responsible were fined £3,000 by the university, however they convinced Cardiff University to divest from fossil fuels. 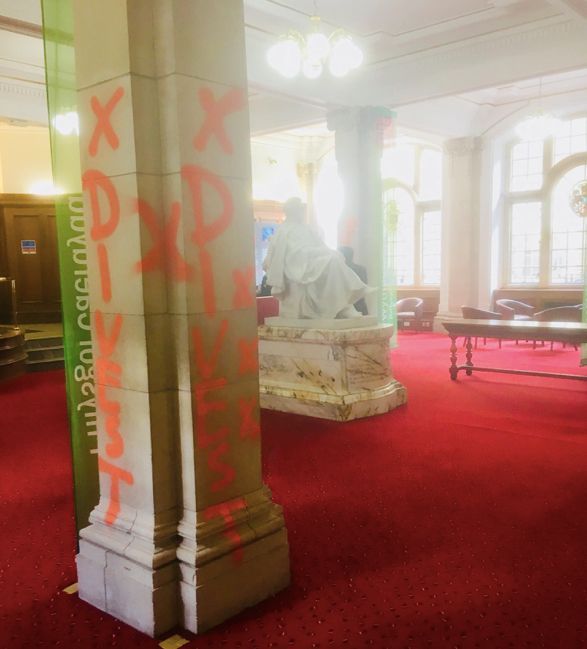 'Divest' was spray painted all over the walls

Someone smashed through Café 37's window after a drunken night out by propelling themselves at the front of the Salisbury Road hotspot. The window cost approximately £3,500 to replace, the footage however, is priceless.

A Cardiff student was abused by Vegan activists for eating an egg sandwich as she was on the way to volunteer at a refugee camp.

Varsity was held in Swansea, and Cardiff won yet again. We proved our dedication to sport, and of course, drinking. However, the event wasn't smooth running as coaches from Cardiff were overbooked and students ended up being denied entrance to Sketty Lane, AND the beer tent ran out of plastic cups. But Cardiff still won. 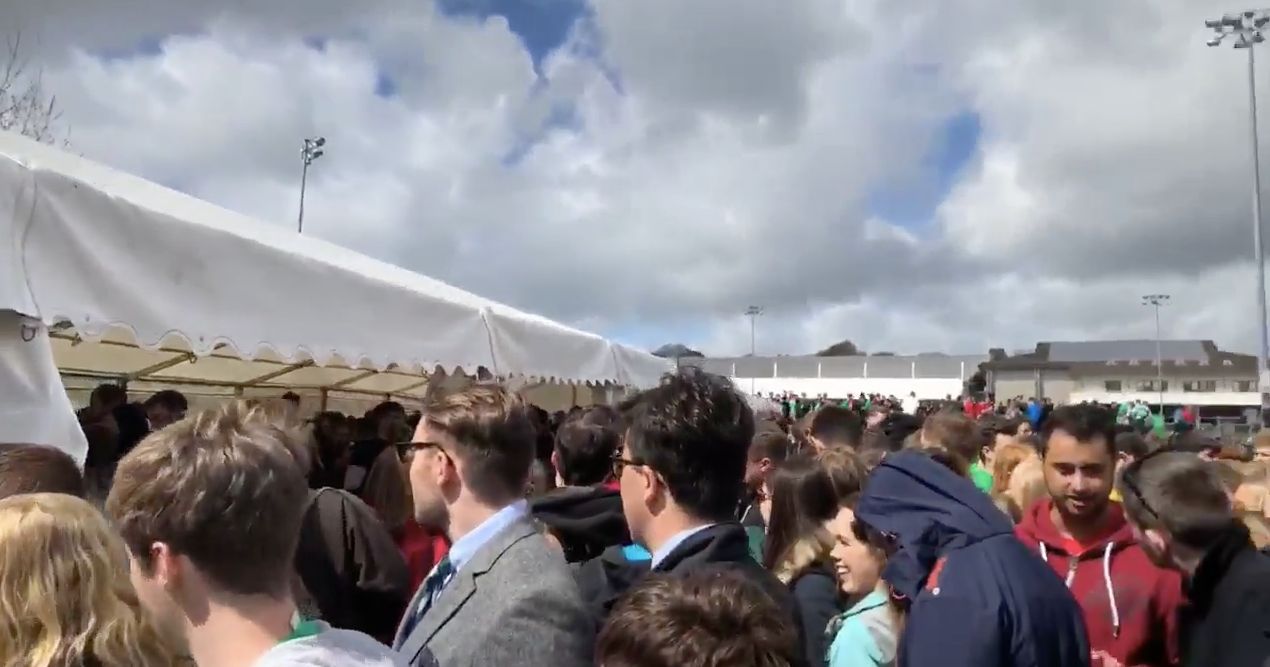 In classic Cardiff style, The ASSL, Aberconway library, and Taly lost WiFi in the middle of exam and dissertation season.

Influential Cardiff Law student Masudah Ali was given a shout out in Parliament , as since the age of 16 she has been campaigning for votes and encouraging other young people to get involved with politics.

We visited the real life Dumping Ground from Tracy Beaker which is just down the road from Cathays in Llanishen, and found out that it is now home to residential apartments and worth over one million pounds. 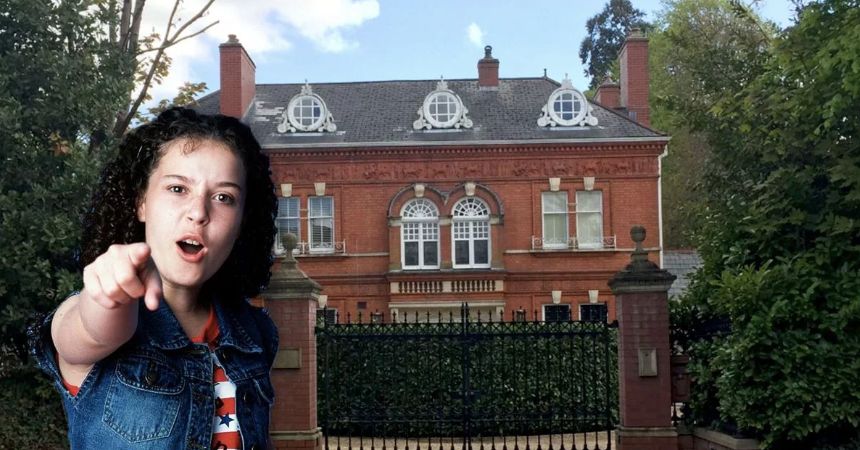 In the month that saw Beyonce and Jay Z grace the capital, alcoholic slushies were put on sale at the Woody .

Meanwhile John Harris, a Cardiff University senior technician in the Bioscience department accidentally invited the whole of BioSci to his retirement drinks. He emailed his colleagues to invite them to his leaving drinks, but accidentally copied in over 2,000 undergrad and postgrad students. Obviously the email prompted some classic replies such as "Can't wait, let's get wonky! See you soon John! Bring Sweeney!!!"

We also ended another year at Cardiff in style with events such as Lashtonbury, the Smack Summer Courtyard, and the End of Term Turn Up taking over, as students celebrated the end of exams. 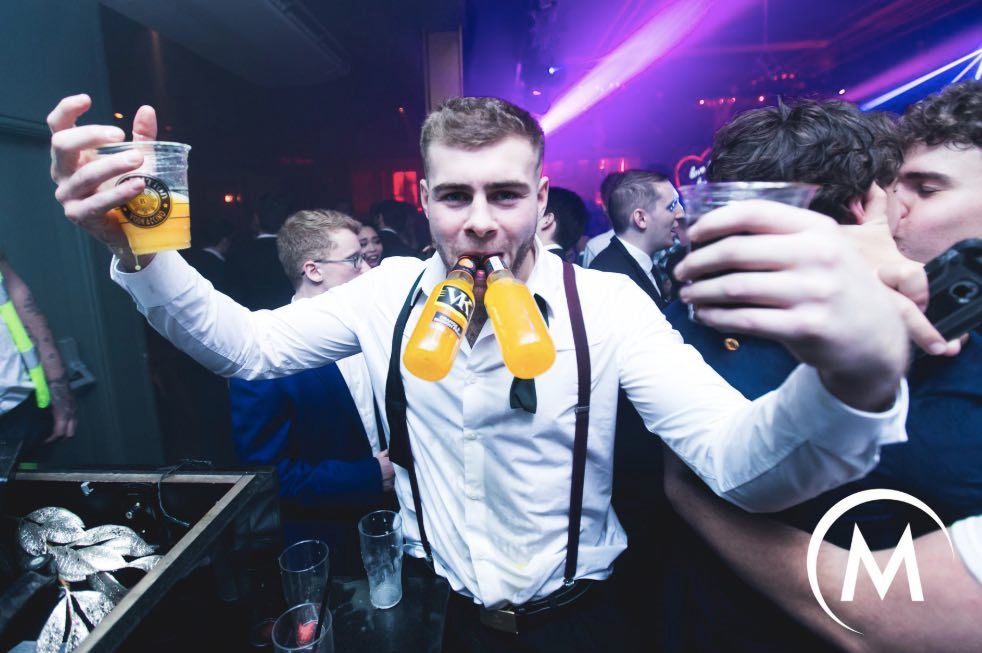 As Love Island fever hit the UK, we told you which Love Island contestant your uni halls was.

Cardiff was officially announced as the UK’s capital of unhealthy eating, which is probably down to all the Fam Fish we've been devouring. 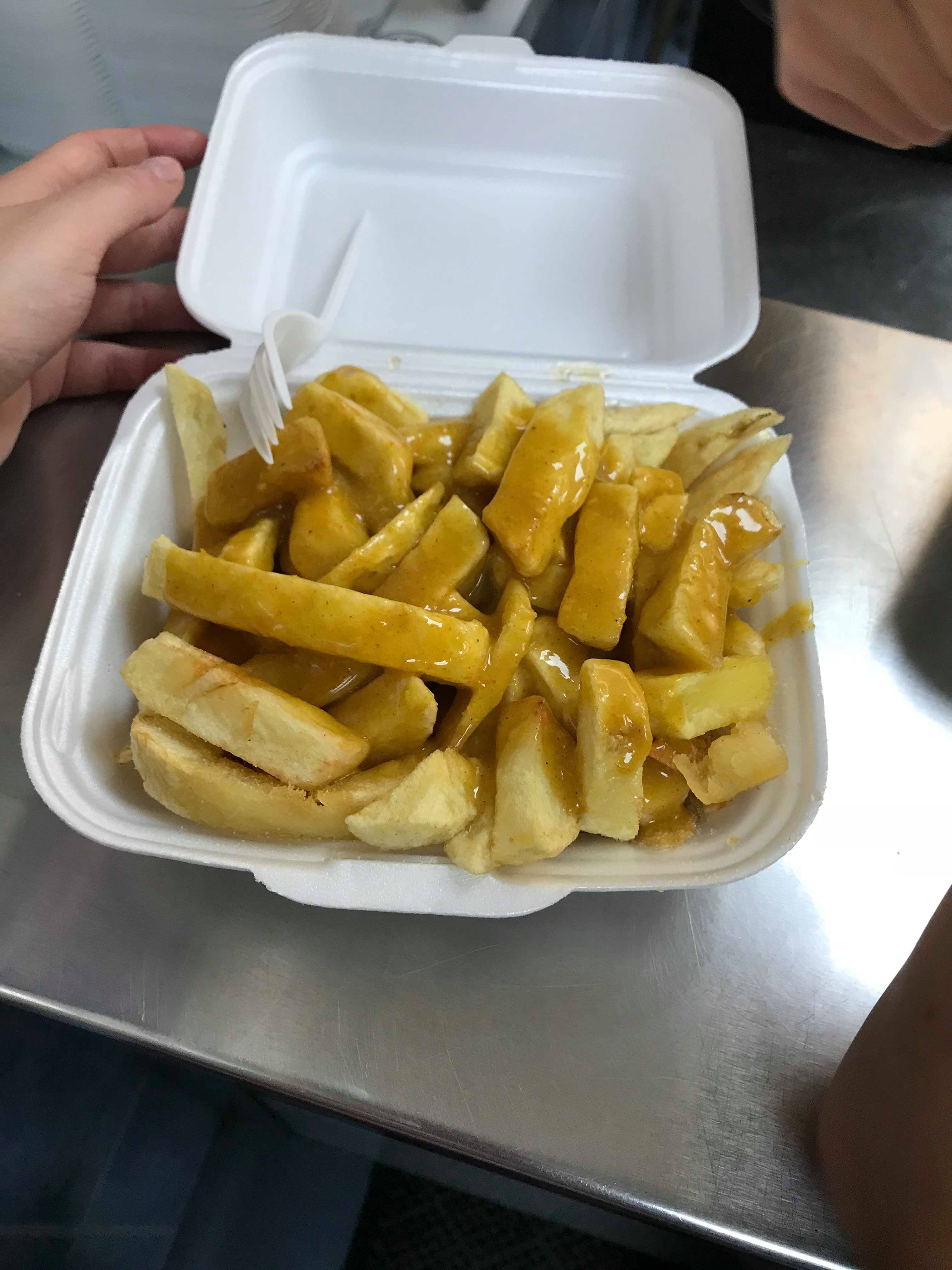 And Cardiff's only Cat Cafe, Feline Good, shut down.

Cardiff was overrun by bright-eyed, bushy-tailed freshers ready to start their student journey. With Radio One's Nick Grimshaw making an appearance at the SU and the annual Inside Out Festival returning to Bute Park, it did not disappoint. Rudimental headlined, there were VKs on tap, and some very wavey garms. 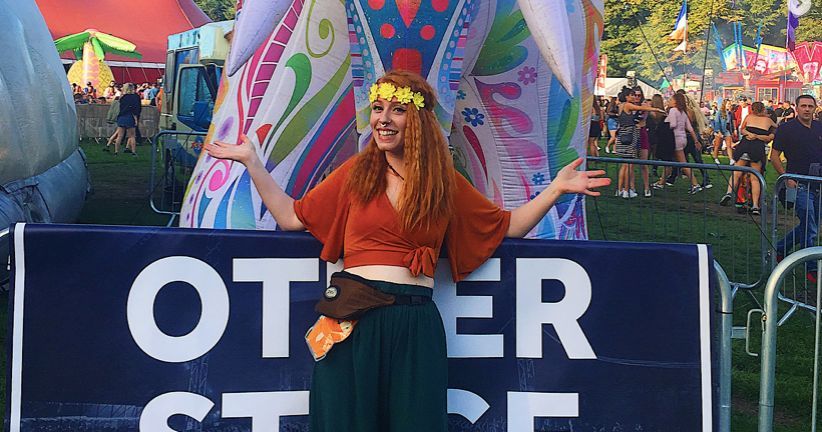 Meanwhile, a Cardiff student told Katie Hopkins to "get out of Wales" when she came to Cardiff city centre. After she asked passers by about their thoughts on the Welsh language – something she has been publicly critical of. Hopkins was left uncharacteristically speechless.

Cardiff was also named the second cheapest place to be a student in the UK, being beaten for the first place post by Hull.

A Cardiff student has confronted Katie Hopkins, telling her to "Get out of Wales" because nobody wants her here

A Cardiff student has confronted Katie Hopkins, telling her to 'Get out of Wales' because nobody wants her here

Posted by The Tab Cardiff on Wednesday, September 12, 2018

And Cardiff medic Luca Galvani won £25,000 on The Chase. He was part of the team that won the largest ever amount on daytime TV, £100,000. When asked what he would spend his winnings on, he responded "two takeaways a day until he graduates, and would buy one from the Ritz."

Huge congratulations to Diane, Luca, Tim and Gayna on their MASSIVE win tonight. Come and have a go if you think you're clever enough. #TheChase pic.twitter.com/d7M462S7sM

We told you which Gavin and Stacy character your university halls is.

We went to the Lash sober to see what it was like, and it was definitely eye opening. On the plus side there was no post night out regrets or a banging hangover.

A Cardiff second year’s dad drove 248 miles to get rid of her bins.

And when Halloween arrived, Cardiff students went OFF. Cardiff was filled with mental costumes and even worse behaviour. From classic angels and devils, to walking VK, Cardiff knows how to do Halloween. But the winners of this years Halloween were the third year housemates who dressed up and Nessa and Smithy. LEGENDS. 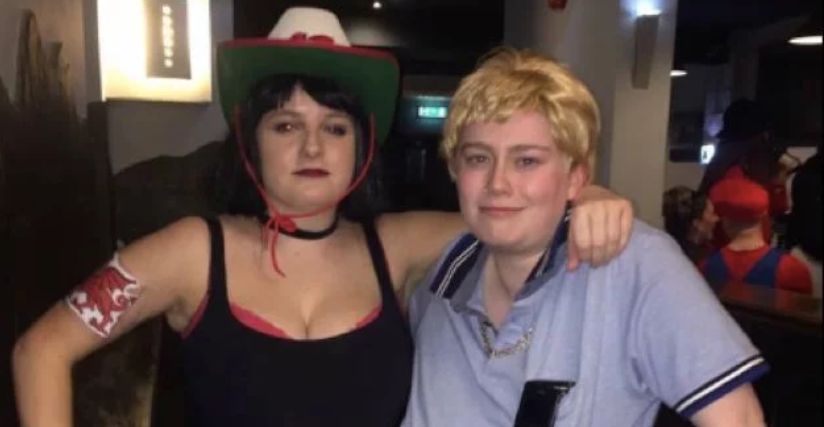 We created a group chat called Cardiff Women Walking Home, so that girls in Cardiff can get home safely after a night out and have someone to speak to if they're in danger.

Cardiff was ranked as one of the most employable universities of 2018 and decorative balloons were banned from Cardiff SU and all Union events to contribute towards reducing pollution and plastic waste.

It was also revealed that us Cardiff Uni legends necked almost half a million VK in the past year. 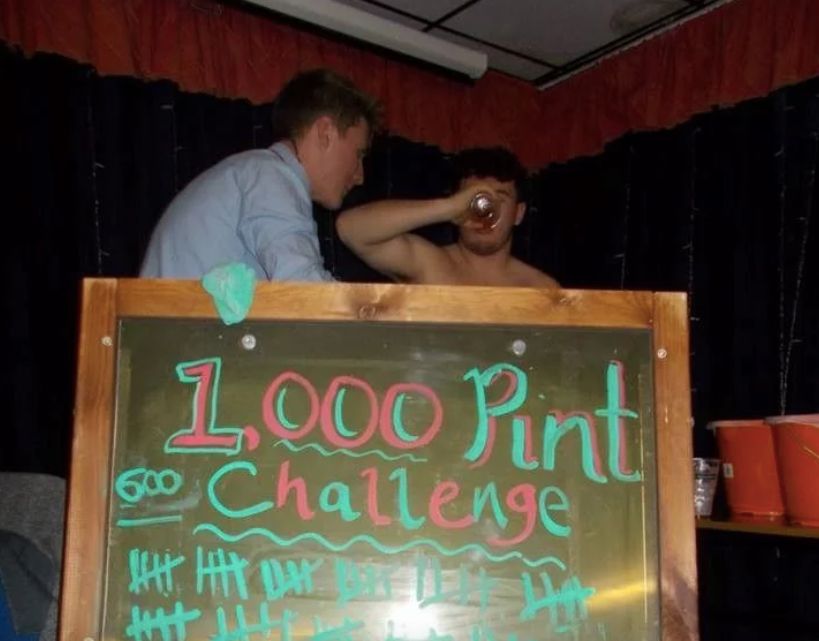 Gentleman's Fight Night returned for the third time in December and gave Cardiff students an evening of action and excitement with Fight of the Night going to Alex Hegedus and William Barradell-Black who drew. The next instalment of fight night is set to take place this April. 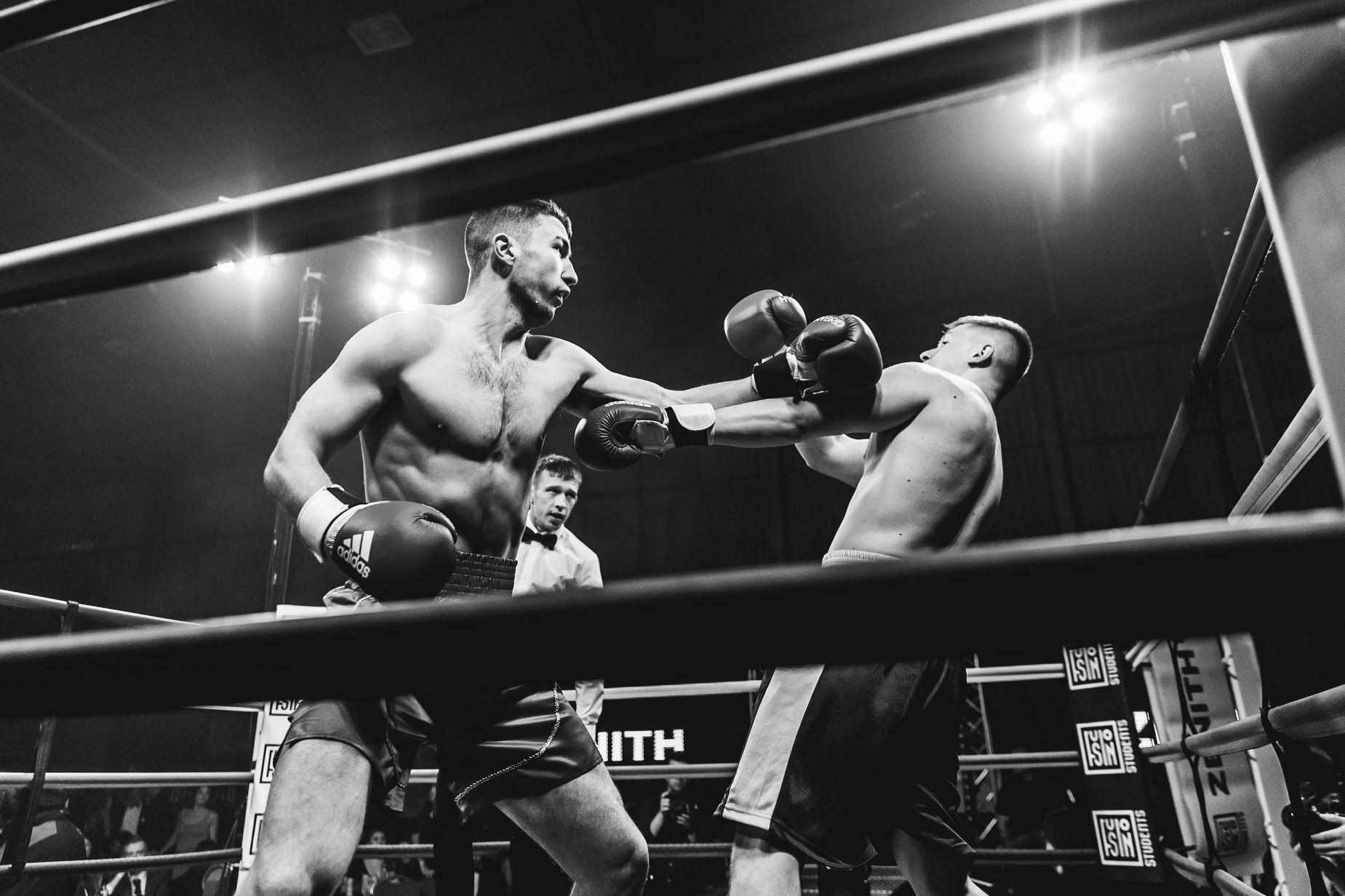 To put Alfie Deyes to shame we showed how to really live off £1 a day, in Cardiff. And we voted Hoffi Coffi Cardiff's best cup of coffee.

Just in time to revive us from deadlines and make us feel all warm and festive, Winter Wonderland also returned. Arriving this year with a huge drop tower that made us all absolutely shit ourselves, and with the classic ice skating rink that ensured we could make a complete idiot of ourselves in front of our Winter baes. 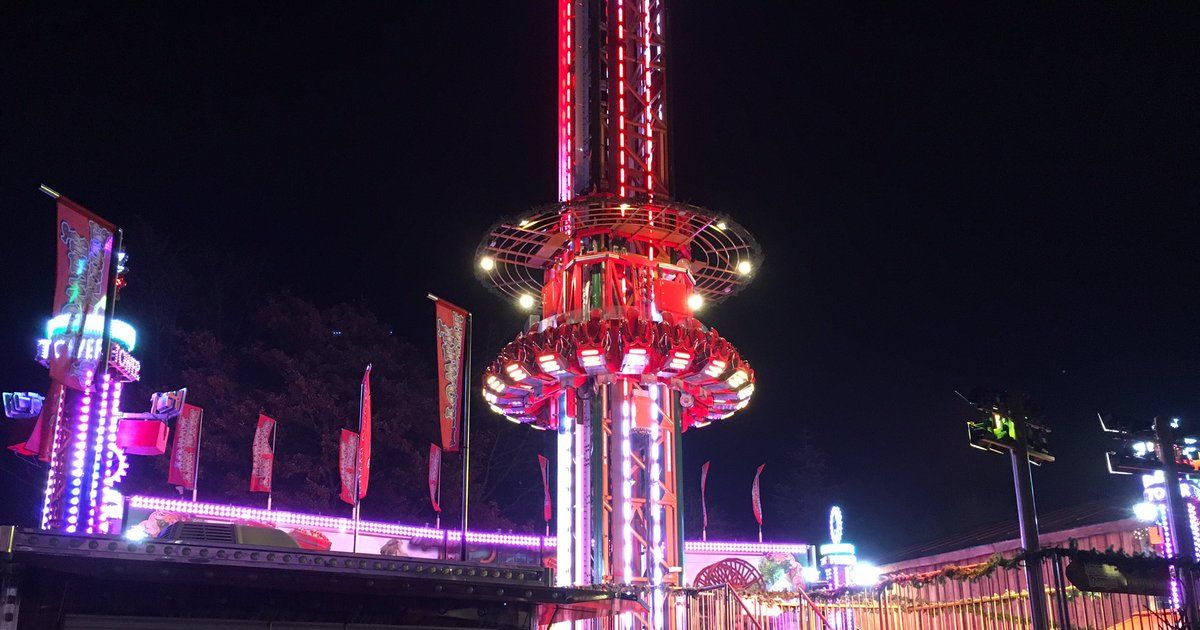 However in a sad end to the year, Gwdihŵ announced their closure which is due to take place at the end of January.