Remember when a VetMed van was robbed for ket?

Cambridge rarely has a quiet year, and 2018 was no exception. In fact trawling through the News section was a trek down a fairly traumatic memory lane. May Ball controversies, a range of protests, a "war" on drinking socs and Daily Mail anger about CUSU don't even begin to cover it.

Standing up for what you believe in !

As a university often known for its student activism, it's not a surprise that the first category in this news round up is about the variety of protests we've had this year. Early on, there was a rally for the living wage and the 'Time's Up' campaign where students wore black to bring attention to issues related to sexual assault. Throughout the year the Cut the Rent campaigns at colleges such as Magdalene and Robinson brought attention to the high rent bills given to students; a CUSU campaign later on highlighting what a big disparity between colleges there can be. As well as the scandal of the Medwards Bunkabins, it's been a year of less than desirable living situations for some Cantabs.

Some of the most visible and dramatic protests of the year came from Zero Carbon Society. With direct acts of vandalism, occupying the university's finance offices, various marches and high profile banner drops they were hard to miss. Divestment was one of the hottest topics of discussion for 2018 with some colleges slowly deciding to take action. 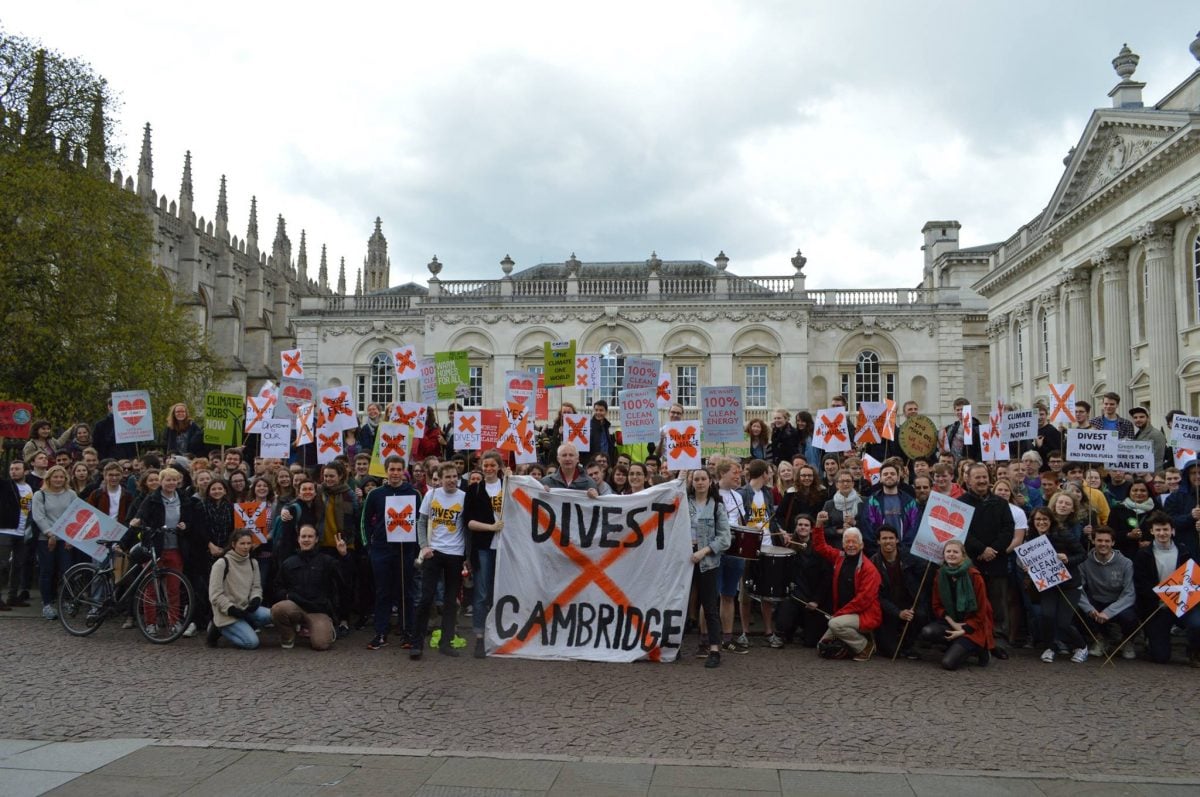 With many of the issues protested for this year not being resolved it's likely that 2019 will bring just as much activism. But students weren't the only ones standing up for what they believed in.

Remember the empty wasteland the was last Lent, with cancelled lectures and chat about an immediate 2.i for everyone? One of the biggest events of our year was the UCU strikes about pension security. With picket lines and hot debate it was unforgettable as nearly every student and academic was touched by its politics. It was arguably the most successful bit of activism in 2018 as ultimately a better solution was found for the striking staff. 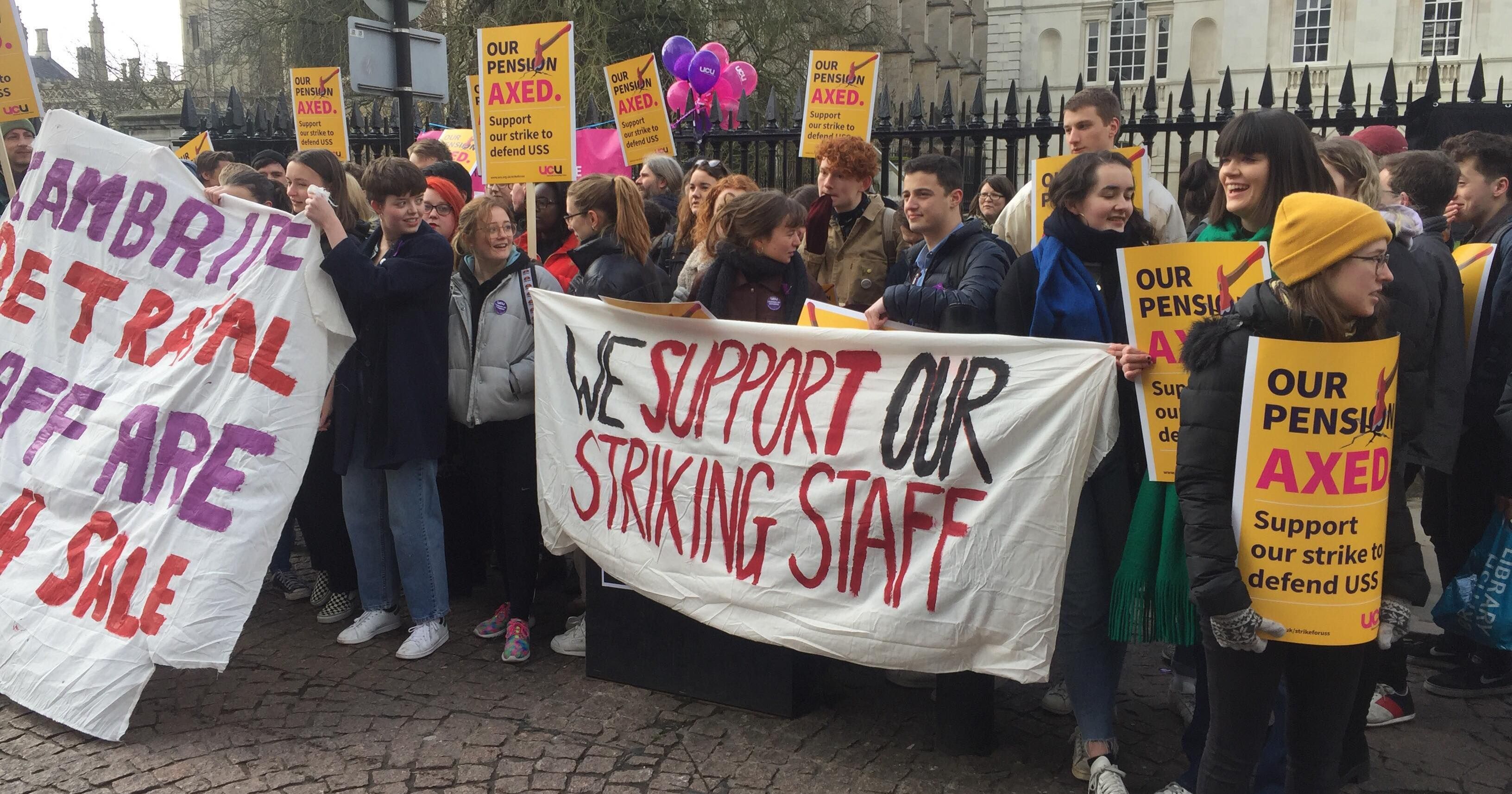 Academics didn't keep out of other issues either. Doctor Priyamvada Gopal called out the King's Porters for racism, after being repeatedly racially profiled. Dr Gopal was critical of Mary Beard's crying tweet after being called out for being a colonialist. Her remarks had been made in response to questions of Oxfam employee misconduct in Haiti. Dame Barbara Stocking, the President of Medwards, went on leave after being connected with that issue, alongside calls of sexism and cultural appropriation. Finally, Dr Victoria Bateman posted a nearly naked video protesting the lack of female representation in economics and St Edmund's College were called out for employing a racial psuedo-scientist.

Phew. Academics do like strong opinions and a bit of controversy.

How could we forget. When a student submission page for your minor gripes declared a "war on drinking socs." Following the publishing of a video of the Tit Hall's Crescents in Spoons on Caesarian Sunday, where they made ignorant class related comments, the page became the host for a myriad of anonymous student submissions about the misconduct of drinking societies. 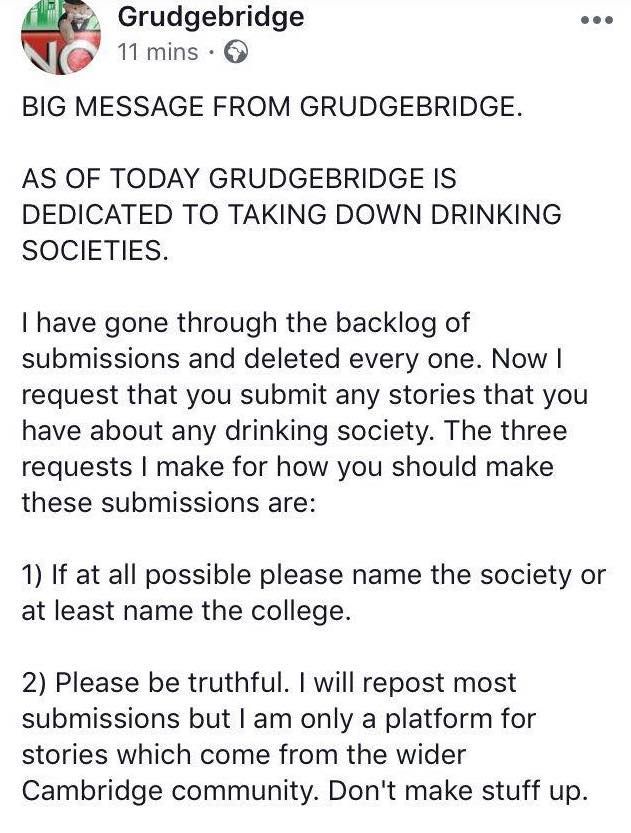 Despite there being discussion about whether or not Grudgebridge was the right way to handle this complicated issue, it created a Cambridge wide discussion. With some of the drinking socs being disbanded and CUSU launching a campaign to create a Code of Conduct, the page was clumsy but effective in its objective. Although, as the conversation about drinking socs didn't seem to continue into Michaelmas, it is questionable whether or not in the new year it'll come up as an important news topic. But again, for drinking socs 2019 could be the final nail in the coffin.

Indeed, no news round up of a year would be complete without thinking about what CUSU contributed to Cambridge's current events. With Evie Aspinall getting voted in on 2nd preference votes and discussions about CUSU's politics it was an interesting year. Rulings about Remembrance and having a position of Brexit were some of CUSU's most controversial decisions. However, of course they kept up their usual day to day work of exposing this university's problems and providing free sanitary products. Keep up the good work guys <3

Wait…did you see who that was?

One of the benefits of Cambridge are the random celebrities that due to a Union performance or some other link turn up in these hallowed halls. From sightings of David Attenborough, intimate gigs with Rick Astley, Maisie Williams and Emma Thompson popping up it there are often so many people about. Peter Andre, Bryan Cranston, James Blunt, Omarosa, Orlando Bloom and Judy Murray are just a handful of those who appeared at the Union during 2018. Always best to keep your eyes peeled, because you never know who you might see. 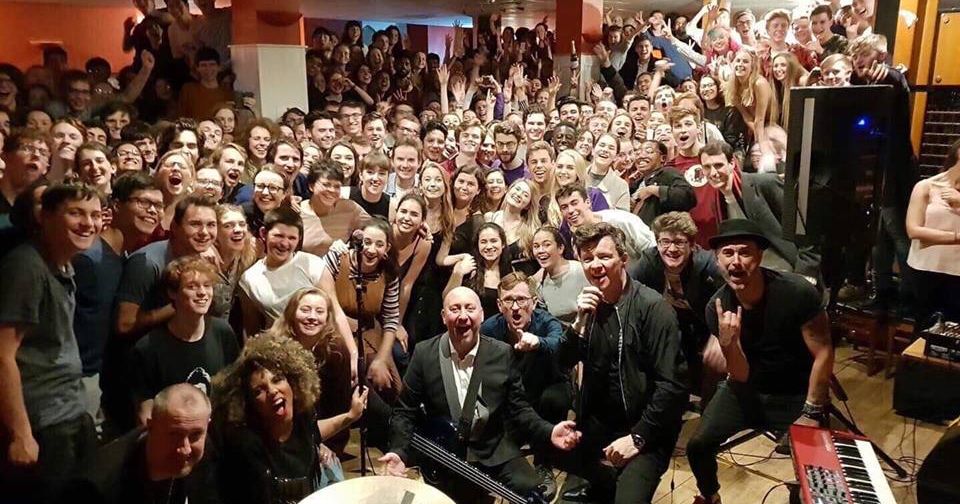 A moment also needs to be taken here to remember the loss of the great Stephen Hawking earlier in the year. A beloved scientist, and Caius fellow, he inspired many. His death was met with many a touching tribute, including a memorial placed in Caius outside his old room.

Y'know Cambridge students aren't just irritating know-it-alls. Some of you lot are pretty good on the pitch/track/river. Cambridge won the boat race for both men and women and there was of course a whole selection of victories in the 2018 Varsity.

With mixed results at the Rugby, the first Varsity event of the year, it's yet to be seen how 2019 will play out sports wise. But here at the Tab we're forever optimistic – GO LIGHT BLUES!

And all that that doesn't fit in a category

Little unrelated news stories always crop up through the year. There were,

The Bad: White students shutting down a BME open mic night, offensive CUCA speakers and the shutting down of two of Cambridge's best vegan haunts.

The Good: A Syrian refugee getting crowd funding so that he could attend Cambridge, Stormzy launching a scholarship for black students and Cambridge topping the university rankings.

The Tragic: Life changing from Kuda to Vinyl (and therefore losing all credibility as a venue, don't @ me) and it being announced that Cindies would be relocating underground. The flat earth 'educators' in the town centre can be slotted in here too.

The Bizarre: Hughes Hall May Ball nearly being shut down because of a'Fifty Shades of Grey' theme, Robinson students being sent emails advertising where to get the best weed and of course, the VetMed van being robbed for ket.

All that's left to do is sign off as we face the last year of the 2010s. It's been a pleasure to report the variety of Cantab news throughout the year, and this round up doesn't even begin to cover the great enormity it. Have a great NYE and here's to another year of the Tab being everyone's favourite student newspaper* x

*Okay that's a lie but thank you all so much for reading. And we hope that our sunny rebranding this year didn't put you off too much. Lots of Love always xoxox

Who do you think is a big name on campus?