It’s time we talked about Casino: The best, worst and only real nightclub in Guildford

It’ll be hard to pinpoint when you first heard about the Onslow Street institution that is Casino.

It may have been whispers in the George Abbot playground passed down from older, wiser sixth formers, it may have been muttered under your parents’ breath as they vigorously shook their heads at the latest antics of Michel Harper in the Surrey Ad. But one thing’s for sure: you knew about it way before you were old enough to go there.

You saw it as you left The Friary to go the cinema, flaming torches lighting up the most depressing clubbing roundabout in the world. You heard its name mentioned on Eagle radio alongside Cheryl Coles’, so you thought it was the fanciest place around.

Fast forward five years. You’re 18, it’s finally happened. Sure, it’s no longer called Harpers and yeah, it is a Monday in November, but the golden doors have finally opened for you and there’s no way you’re going to miss it. It’s a standard MNG: Pres at whoever’s mum is out, then either a mate’s car or taxi to ‘spoons. Meet everyone you saw four hours earlier in the common room. See off some double vodka Monsters (why always Monster?) and then off to Casino for before midnight.

Stuck in the freezing cold, it was almost easy to see why people got excited about Casino. You could see the palm trees in the smoking area swaying, you felt the warmth of the torches and in that moment, it was the promised land.

Then you were in. It was everything you could’ve hoped for. Top 40 hits, beds in the smoking area, poles with podiums, sofas behind curtains, toilet attendants,  A FRUIT MACHINE. It was a little slice of heaven in a few thousand square metres. I have fond memories of the early years of Casino. Lipsing girls at sixth form socials, my 18th birthday, my friend Robbie who’d come down from St. Albans for the weekend getting kicked out for being too smashed. 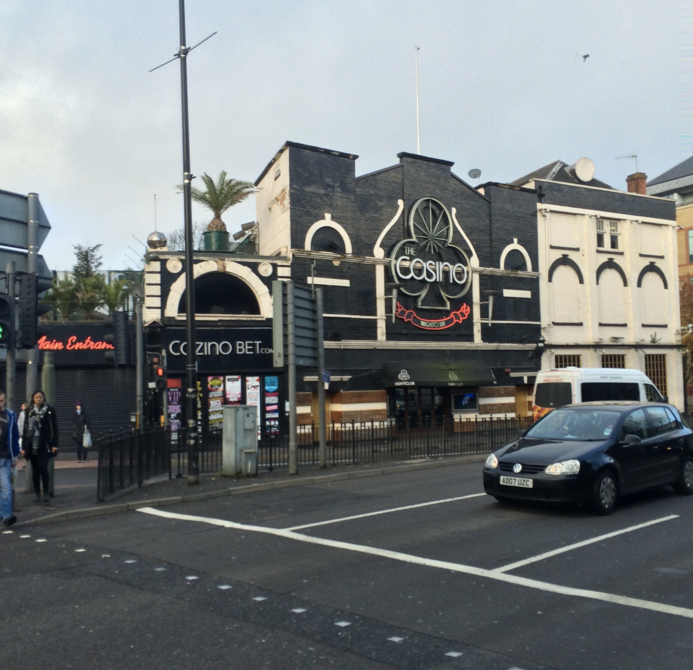 But then when I went to uni, something happened. I came back to Guildford, the nights I remembered weren’t as glossy. There were more chavs, more Bench polo shirts, more Money Jeans. Casino is, at least on the face of it, a proper club. There’s Jager, “celeb” appearances, beauty therapists from Fleet. It has all the ingredients of a typical British Night Out.

But it lacks something. Something that would elevate it from a shit regional club to a haven for the VK hungry in the home counties.

Maybe it’s because you went there at 8pm on a Saturday and saw its ugly, empty space for what it really is, or maybe it’s that time you paid EIGHT pounds to see Dappy from 50 metres away, separated by a braying mob of Bellfields’ finest.

Maybe it’s something else entirely. But whatever the indeterminable factor that makes Casino shit is, it makes it really shit. The people are worse, the drinks more expensive and the dancefloor hotter than the face of the sun.

But hey, at least it’s not Flares.

Unbelievably, Casino isn’t winning this vote to find the most tragic hometown club in the country. To change that, vote for it here.