Who is Roger Hallam? The Ex King’s student and organiser of Extinction Rebellion

He studied Civil Disobedience at uni

Roger Hallam is a former King’s PhD student and co-founder of the activist group Extinction Rebellion.

This week he appeared in Southwark Crown Court, accused of spray-painting a listed King’s College London Building in 2017 and causing £7000 worth of damage. He was cleared of all charges.

Hallam said: “We sat in the court, we watched paint dry for three days on a ridiculous charge and the jury returned the common sense verdict of not guilty.

“Chalk on the wall is obviously less important than the impending catastrophe for the planet." 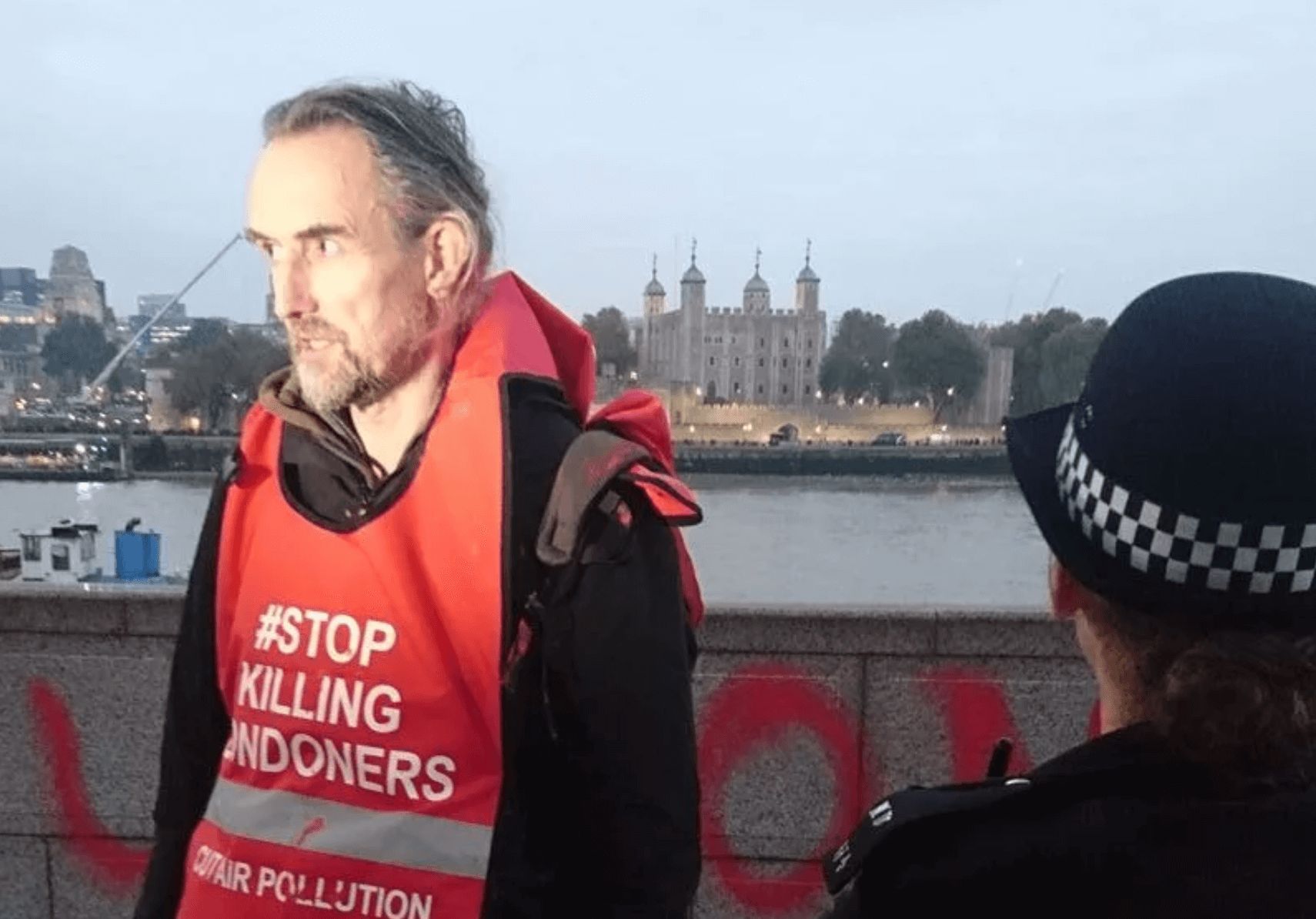 Roger has been protesting for climate change at King’s for years. As a PhD student studying Civil Disobedience, he spray-painted the Great Hall, subsequently going on a two-week hunger strike until King’s agreed to divest from fossil fuels, and was dragged off campus by security for sticking daffodils to the front of the Strand building.

Extinction Rebellion has been protesting up and down the country – in Manchester, Edinburgh, London, and more. But who is the man at the heart of the organisation?

He spray painted the front of the Strand and the Great Hall saying: “DIVEST FROM OIL AND GAS” “NOW” and “OUT OF TIME”.

The damage Hallam did to the building was for his involvement in the King’s Climate Change Emergency campaign to stop King’s continuing to invest £14 million a year into fossil fuels.

He was then dragged off campus by security. A spokesperson from King’s Climate Change Emergency at the time stated: “Roger refused to move and was threatened with police arrest. After 20 minutes, two security guards were instructed to drag people out of the Students’ Union building".

Back in 2017 Hallam went on a hunger strike. He promised he would remain on strike until King’s agrees to end its multi-million investment in oil companies.

The hunger strike lasted 14 days. All he had was some orange juice on the fifth day.

Hallam met with then VP Christ Mottershead, after which the strike ended. The meeting included former KCLSU President Ben Hunt and a representative from King’s press office. It was agreed King’s would divest from fossil fuels by 2020. He celebrated with a victory smoothie. 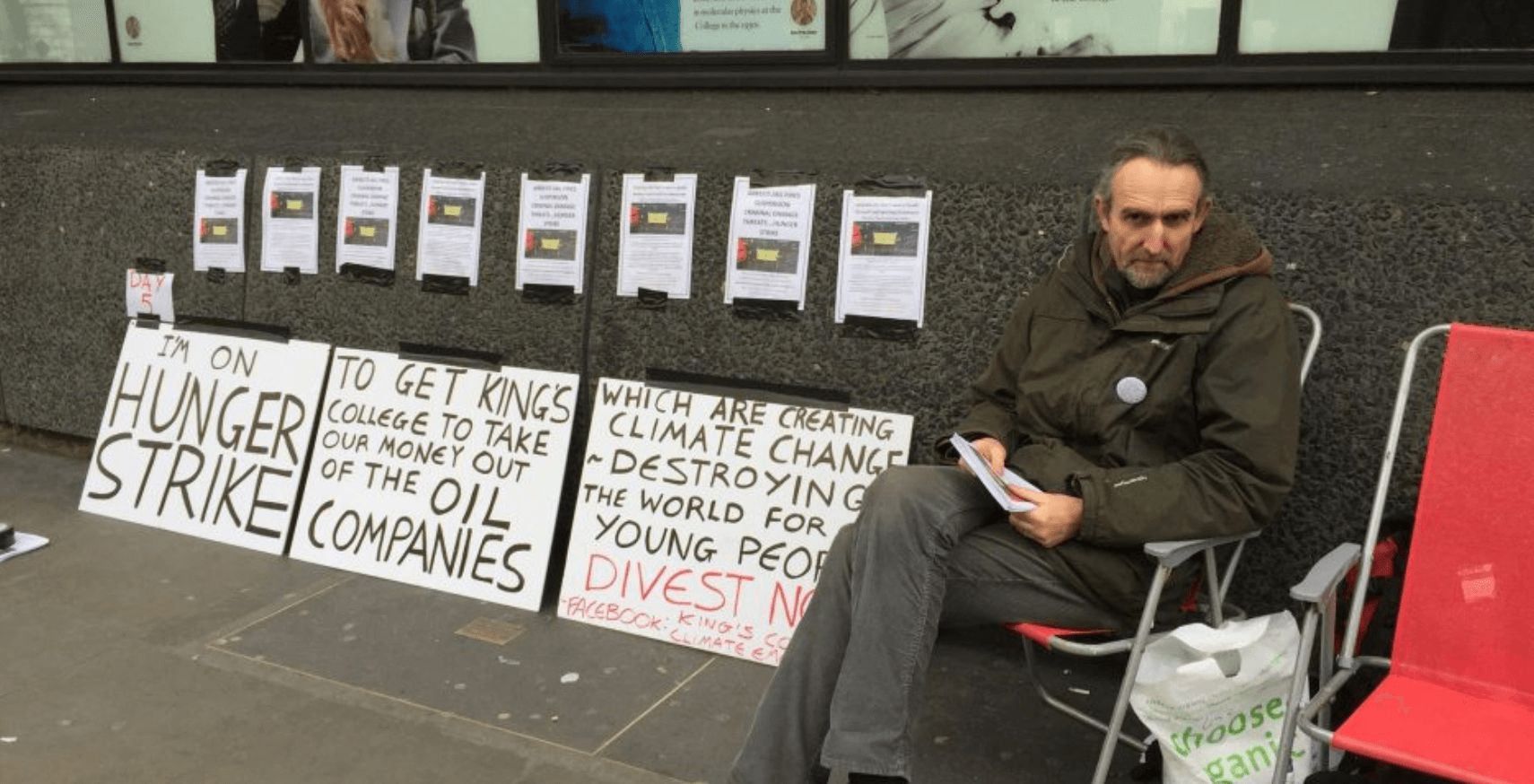 He protested with Stop Killing Londoners

After being arrested he used this opportunity to reach out to Mayor Sadiq Khan which detailed is requests about the pollution in London.

He boldly claimed that “we have been witnessing the social murder of thousands of our citizens in London and other UK citizens for over a decade due to toxic air pollution”.

After this letter was published Hallam and his fellow campaigners were released with a fine of £385 each.

Along with three other activists Hallam was arrested for criminal damage in the middle of a peaceful protest at LSE during the 2017 cleaners strikes. LSE’s walls have been covered in balloons, flowers and posters advocating for better salaries and working conditions for the university’s cleaning staff. Chalk spray paint, a material easily removable with soap and water, was also being used on the buildings’ exteriors. 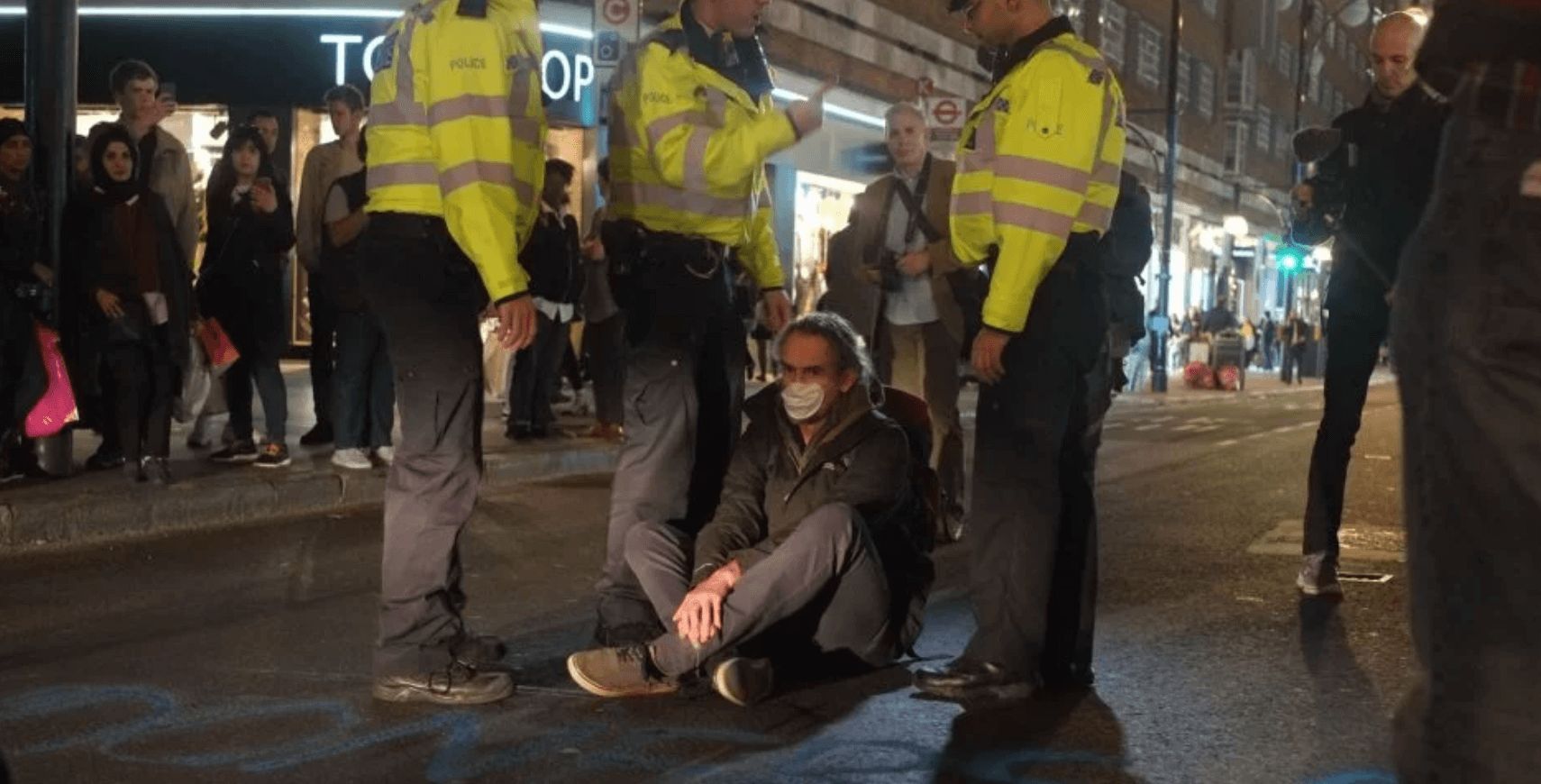 Roger Hallam took part in the Justice4Cleaners protests, after which he assisted protests at LSE. While campaigning for Life Not Money, Roger said if LSE wanted “to avoid damage to its international reputation”, it needed “to follow the advice of its academics; cut Director pay and provide decent working conditions to all its workers”.

He founded Extinction Rebellion after he left King’s

Since co-founding of the organisation Extinction Rebellion, it now has the support of over 100 academics. The group is described as a non-violent socio-political movement. Extinction Rebellion aims to have the government declare a climate emergency, reduce carbon emissions to zero by 2025, and create a “Citizens’ Assembly” for climate and ecological justice.

Extinction Rebellion was responsible for a number of protests earlier this year in March which caused much disruption to large towns and cities across the U.K. They spray painted a number of listed buildings, banks and roads. Some of the most extreme acts of civil disobedience the organisation has done, includes members gluing their hands to the department doors of the UK’s Department for Business, Energy and Industrial Strategy.

In an article Hallam wrote for The Guardian he said: “Extinction Rebellion is humbly following in the tradition of Gandhi and Martin Luther King. We are simply rediscovering what people do when they have had enough of failure and really want to make a difference.”

• Here’s what you need to know about Extinction Rebellion, the protests taking over London