These 13 genius meme Halloween costume ideas will have everyone howling

There have been countless viral memes this year. And now, Halloween meme costumes are the best thing people are dressing up as. It’s a quick way to create a costume that will make all your mates wonder how they didn’t think of that.

Here are the 13 best Halloween meme costumes for 2019, you’re welcome.

What you need: An alien costume, the ability to Naruto run. 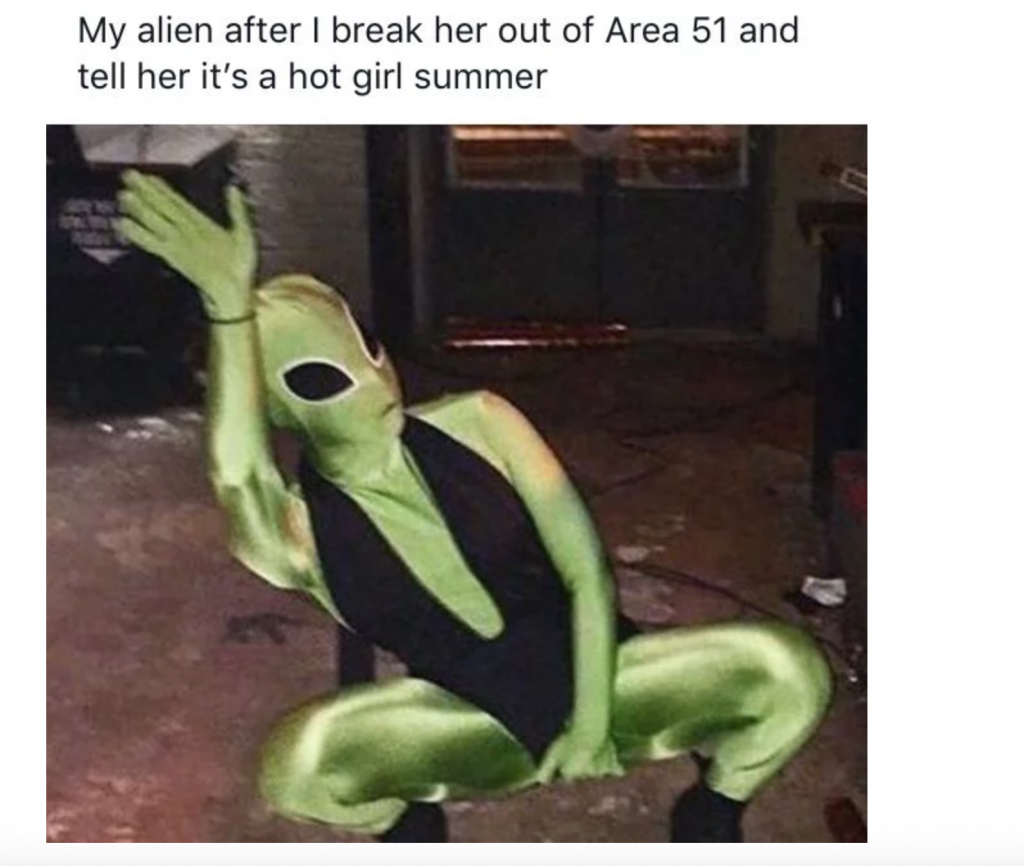 Area 51 memes became a thing in July, when over two million people joined a Facebook event to storm Area 51 so we can “see them aliens”. The theory was if everyone went to the government protected zone, we could all go in and see the apparent aliens that are kept there.

And people actually went!! There was a live stream of the big raid and it completely took over the internet. If you went as an Area 51 alien for Halloween everyone would understand the reference and it would be nothing short of classic. Get practicing your Naruto run and you’ve nailed it.

What you need: Scruchies, a HydroFlask, a shell necklace, Vans, shorts and a tube top. 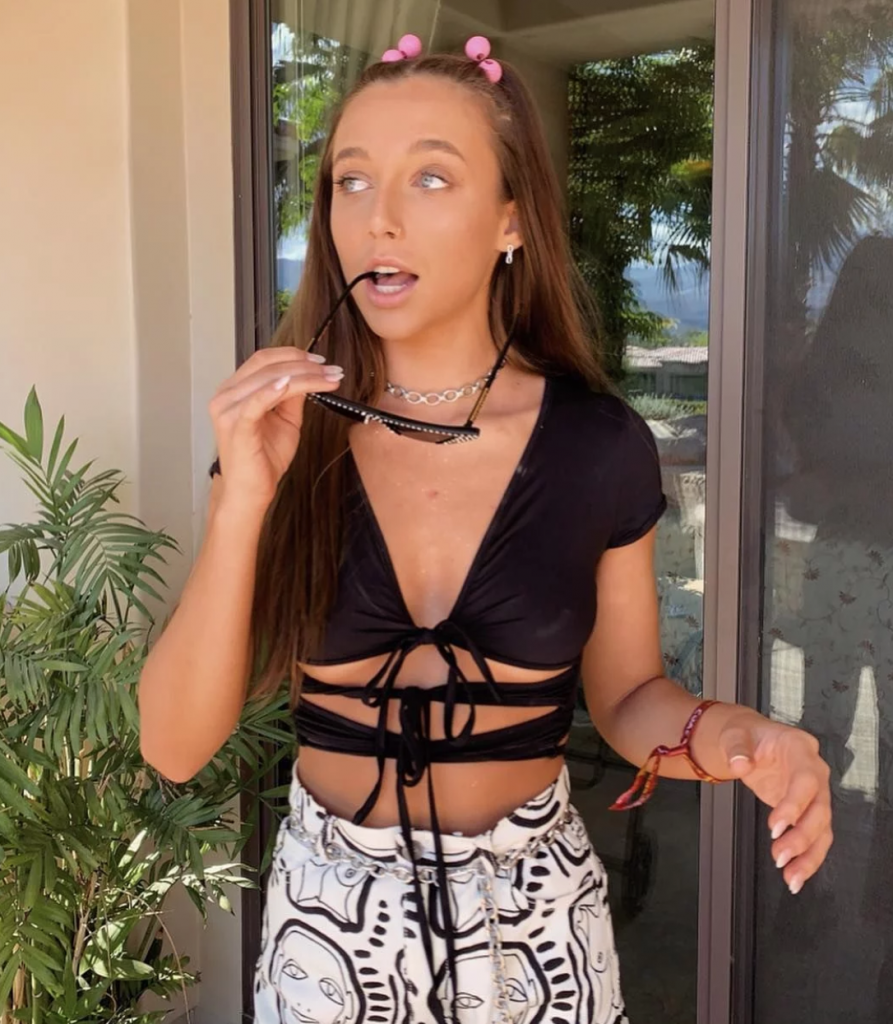 This year has been the rise of the VSCO girl. She has her own memes, her own slang and you can become one. There’s such thing as VSCO boy too, in case you’re feeling left out.

What you need: A printed version of Coleen Rooney’s iconic tweet, something to attach it yourself with.

This has been a burden in my life for a few years now and finally I have got to the bottom of it…… pic.twitter.com/0YqJAoXuK1

The Rebekah Vardy X Coleen Rooney drama was the wildest thing to happen all year. It all started when Coleen Rooney said in a tweet that stories about her were being sold to The Sun newspaper. But WAGatha Christie Coleen Rooney was one step ahead of the game and said she had suspicions about who it was selling the stories about her. So she blocked every account on her private Instagram from viewing her stories apart from one account, and began posting fake stories to see if they would get picked up – which they were. The one account that was still able to see everything? It’s………. Rebekah Vardy’s account.

The revelation shook the world and the memes were on fire. If you’re wondering how to turn this into a Halloween costume, then here’s the inspo: Maya Carswell, a second-year Biomed student at University of Liverpool went to an event wearing a sign saying: “It’s… Rebekah Vardy’s account.” 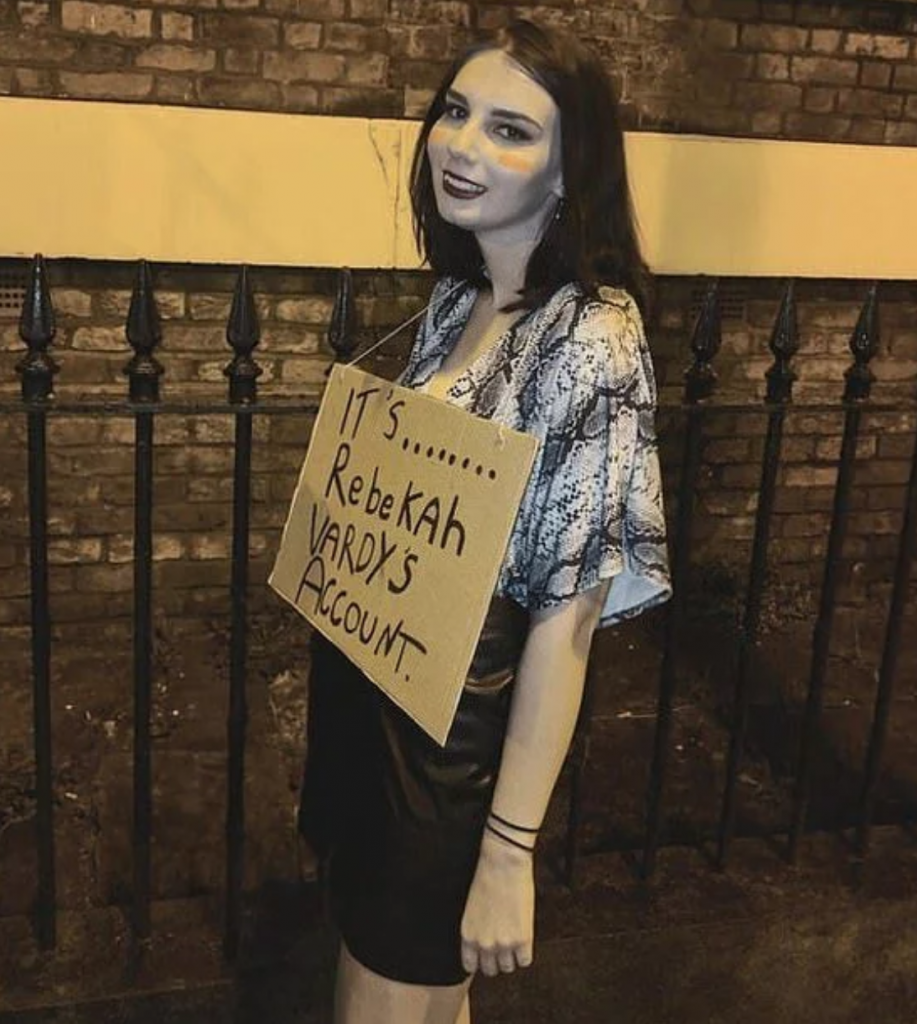 via The Liverpool Tab

Me getting mad AF for the smallest inconvenience. pic.twitter.com/Vomq2Y7BJx

The shaking mannequin meme might just be the funniest and most relatable one yet. Have you ever been filled with so much anger you actually begin to shake? Or had a hangover so bad you feel like you might be physically vibrating? If yes, this meme is you.

What you need: The ability to do cat makeup so good, it’s really bad. 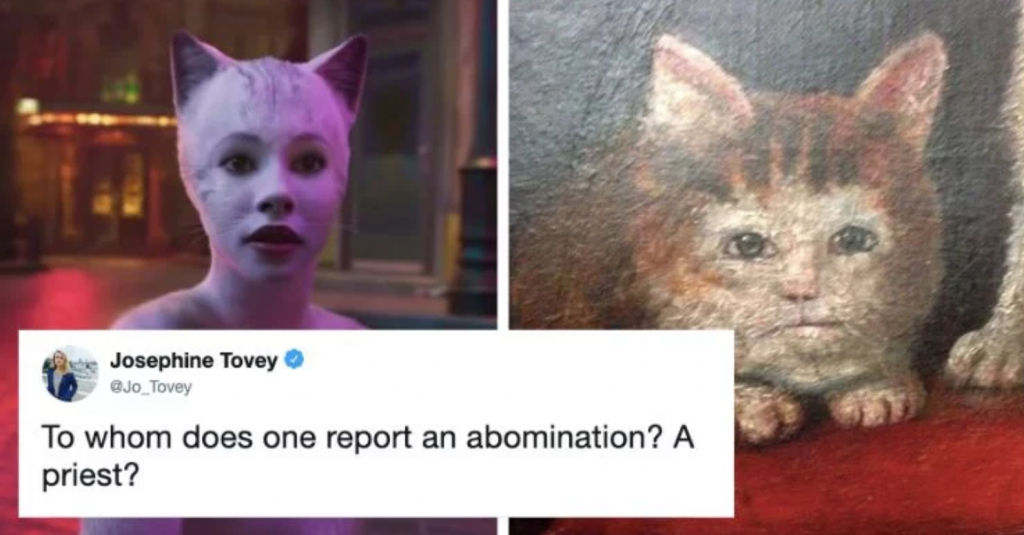 Going as the Cat movie memes is one of the few Halloween meme costumes that is actually quite petrifying. Cat movie memes became a thing after the trailer was released. The CGI for the film looks terrifying.

What you need: A Tesco uniform, messy hair, false eyelashes from last night (hangover is optional but might add authenticity).

We’ve all been the hungover Tesco girl. She became a meme sensation on TikTok, when the video of her ranting about her experience working in Tesco with a bit of a hangover went viral.

In the video, 19-year-old Jade Pinner says: “Girls, I’m not gonna lie to you. I’ve had no sleep and I’m working till 10 tonight and I feel like killing myself. ‘Hello yes I can show you where this is. Aisle 22.’ Why don’t you look what it says on the fucking board instead of asking me what aisle butter is in?” It’s iconic.

Can Tesco please give this girl a promotion, she deserves it. pic.twitter.com/X3M5qGVMj3

She told The Tab she was “absolutely twatted” and lost her job.

What you need: A Bugs Bunny outfit and something to make your belly look chonky.

The Big Chungus meme is basically a picture of a fat Bugs Bunny. According to KnowYourMeme, the picture of the fat Bugs Bunny is from an original Looney Tunes cartoon aired in 1941. It comes at the end of the scene from the episode “Wabbit Twouble”.

There’s also a Big Chungus song which literally just says “he’s such a big chunky boy”. Don’t question it, just go with it.

What you need: Just an egg costume.

Let’s set a world record together and get the most liked post on Instagram. Beating the current world record held by Kylie Jenner (18 million)! We got this ? #LikeTheEgg #EggSoldiers #EggGang

Instagram’s world record egg broke the existing record for the most liked photo ever. It currently has 53.8 million likes. One of the more simple Halloween meme costumes, but still effective.

What you need: A black bob wig, a midnight blue or black silk robe and big diamond earrings.

When you’re telling your parents a crazy story and you almost snitch on yourself pic.twitter.com/INy44u02bC

RuPaul’s Drag Race contestant Jasmine Masters got everyone saying “and I oop-” after she hit her balls mid video. The clip is now used as a reaction meme all the time.

What you need: A platinum blonde wig, a coat, a big fake smile.

This Daenerys from Game of Thrones meme is a still taken from a scene in season eight when she throws the most sarcastic looking smile you have ever seen.

What you need: A SpongeBob costume, red lipstick, eyeliner, something fancy like a beret.

me ordering a baguette as a side at panera: pic.twitter.com/eJbwRF1HFk

This meme includes a picture of SpongeBob in drag, dressed up in cute cultural clothing. The most popular version of the meme was SpongeBob floating over footage of the Eiffel Tower in Paris, wearing a beret.

What you need: A blue dress, a tray and some Fiji water bottles.

The Fiji water girl went viral at the 2019 Golden Globes. She was there to serve the celebs water from a tray, but ended up photo-bombing all their pictures.

What you need: Whatever you want, you’re living your hot girl summer.

The Hot Girl Summer meme is all about living your best life. It’s about confidence, self love, having a great time and empowering others. Everyone started captioning their pictures with “hot girl summer” and we’ve never looked back. Haven’t got any decent Halloween costume ideas? Come as whatever you want, it’s a hot girl summer.