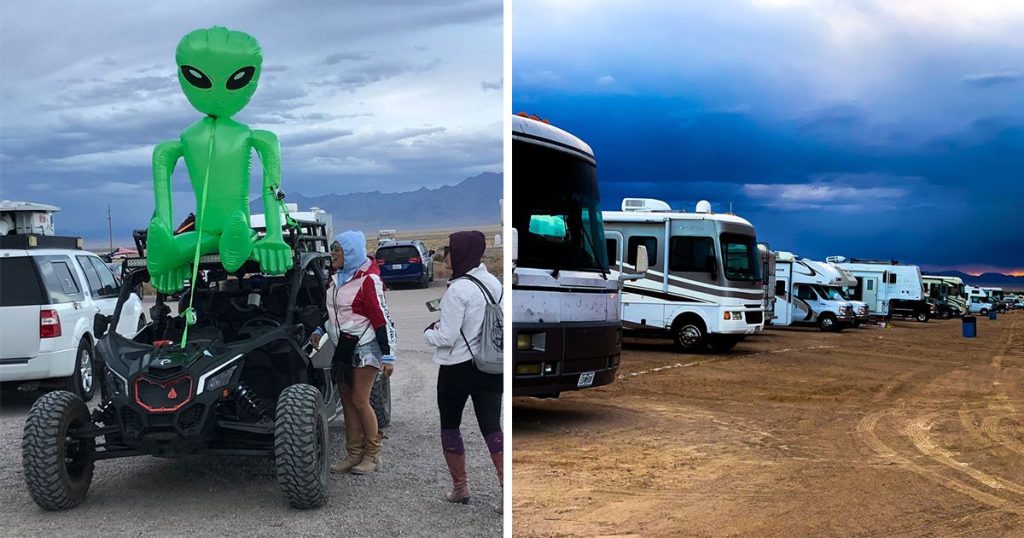 Yes they really are there seeing them aliens

Most of us clicked "interested" on the viral Facebook event, laughed at the memes and then moved on with our lives. But it turns out a lot of people took the joke "Storm Area 51: They Can't Stop Us All" event very seriously, because yep – people are actually there.

The original event said: "We will all meet up at the Area 51 Alien Centre tourist attraction and coordinate our entry. If we Naruto run, we can move faster than their bullets. Lets see them aliens."

If you're not sure what a Naruto run is, here is the perfect example of someone doing it, actually at Area 51:

More than two million people listed themselves as going to the event, with absolutely no plan of going through with it. But some people have.

There are people at the Storm Area 51 raid right now. UFO and alien chasers began descending on Nevada on Thursday. They are trying to get as close as possible to Area 51, the infamous US military zone which conspiracy theorists think is kept top secret because alien activity is taking place there.

In the remote desert town Rachel, residents are said to be worried their quiet and rural home is going to be overtaken by people desperate to get in on the action. Rachel sits around 150 miles away from Las Vegas in Nevada.

The Little Ale Inn in Rachel, Nevada. Image via Flickr

According to The Telegraph, dozens of visitors began arriving outside Rachel's only business – an extraterrestrial-themed motel and restaurant called the Little A'Le'Inn – parking themselves in cars, tents and campers. A fire truck was stationed nearby.

On Twitter loads of people are sharing pictures of them in the towns and areas surrounding Area 51. There are camper vans, four-by-fours, inflatable aliens – the lot. It looks like storm Area 51 is actually a thing.

We found a small group who are still going to make a (Naruto) run for it to set the aliens free… and we're going in with them. Well, our camera guy is at least. #StayTuned https://t.co/oRtz4kxeiv

One tweet described how "most attendees are in their RVs and campers as a cold front ripped through Rachel dropping temps 15 degrees, bringing strong winds and rain."

Another described how "people are already beginning to show up at the Little Ale Inn" in Rachel. The video shows cars and vans parked up outside the motel and restaurant, and a huge camper van pulling into the car park.

There were also a few people ballsy enough to get right up to the gates of the zone.

There are signs all over the zone saying it's a restricted area and apparently signs there say the US government are able to use "deadly force" if anyone trespasses onto the area.

A guard and a dog showed up from inside of the gate of Area 51. #Area51 #StormArea51 pic.twitter.com/YGrK6Rc43S

The police were also prepared for a huge influx of people aiming to storm Area 51. They set up camp nearby and put a warning out on their social media saying they were there.

The ⁦@NyeSheriff⁩ setting up its operations center in Amargosa Valley for possible influx of people for possible #stormarea51 #nyecounty pic.twitter.com/fb8Xz3AhD8

• The apparent Area 51 raid is today, here’s everything you need to know