From piles of cans to worried nans

It’s fair to say that many of us have at some point experienced a night out which has definitely gone too far. We know this because you told us – and the tales of debauchery didn’t stop there. For one unlucky Newcastle student, a seemingly routine night at Soho descended into police and LGBT support charity-flavoured carnage – and all because of an unfortunate pocket dial.

Following a heavy night with the boys, the student (who we’ll call Ben) was making his way back to his flat with his friend when he had the misfortune of pocket dialling his Mum. Being a few drinks deep at this point, he was predictably oblivious to the situation.

Ben’s mother, however, was fearing the worst – a concern only aggravated when Ben didn’t pick up any of the 14 calls she made to his phone afterwards. So, naturally, she called the POLICE.

Only one problem – Ben’s Mum may have made his circumstances sound worse than they actually were.

Inevitably, Ben and his friend would be rudely awakened shortly afterwards.

“Police kicked in the door to my block of flats and were hammering down our flat front door, asking where Ben was. My flatmates hate me and were absolutely over the moon – thinking that I’d finally done some drunk shit, like punching someone or something.”

Remember Ben’s Mum had mentioned her son’s alcohol problem? Well, the scene when they entered his living room couldn’t have been more damning.

“I hosted a pres before we left, and there were about five cider boxes, 15 empty cans and three bottles of mostly empty spirits on my floor, to which the officer said “Jesus Christ” (thinking they were all mine).” 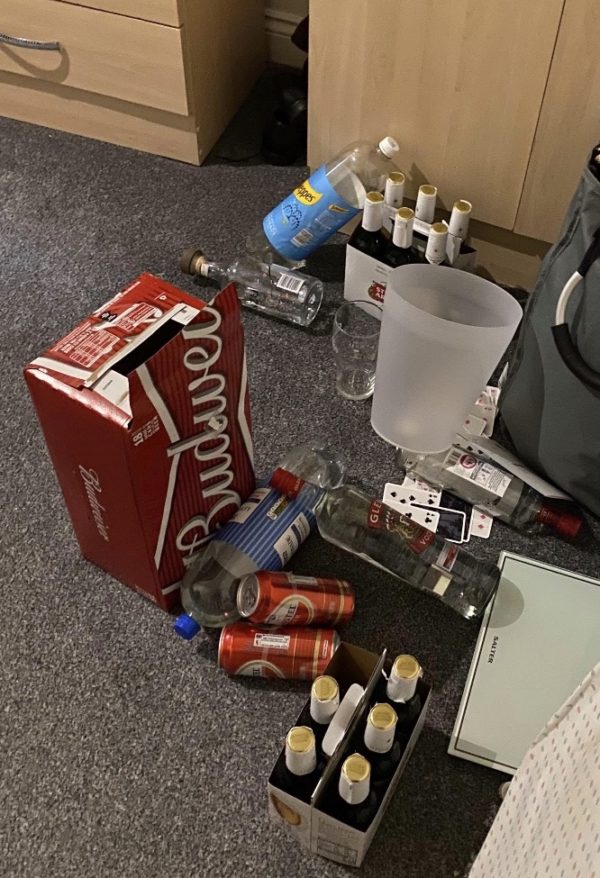 “Apparently I told the officer to “fuck off” – I am very sorry if you’re reading this. He then left my room and met one of my nice flatmates (a true saint), who reassured him that my medical condition is stable and I’m very careful with it (like fuck). Oh, and that my mother’s a bit of a hypochondriac.”

The police officer then informed Ben’s mother of the reassuring news (“he’s just drunk, love”) and left, his time wasted.

“I couldn’t remember anything of it. In fact, my flatmate came in to ask if I was okay after the police left, and apparently I was confused as to why she asked, having already forgotten.”

End of story? Not a chance. The real twist came when Ben’s NAN sent him this letter in the post a few days later. 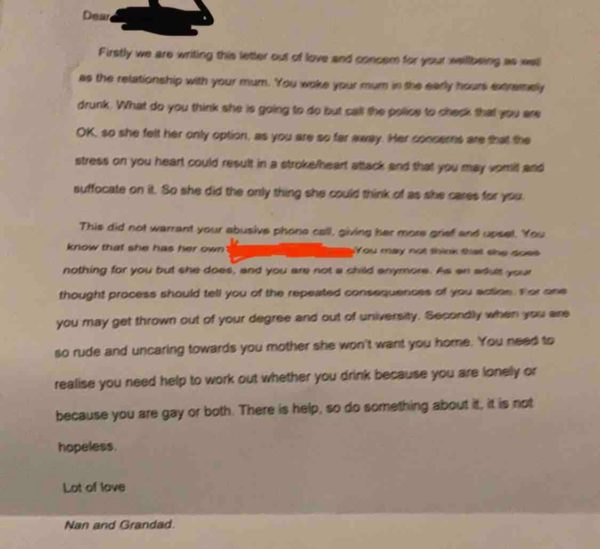 “I received a typed letter from my Nan, asking whether I drank because I was gay or lonely. Neither one of these I have an issue with –  I came out in secondary school and have never had any issues since. She said if I’m not careful with drinking, I could have a heart attack or stroke.

In one final act of (albeit, overbearing) care, Ben’s Mum went out of her way to recommend LGBT+ support charities who could help her son from using alcohol as a “crutch”. 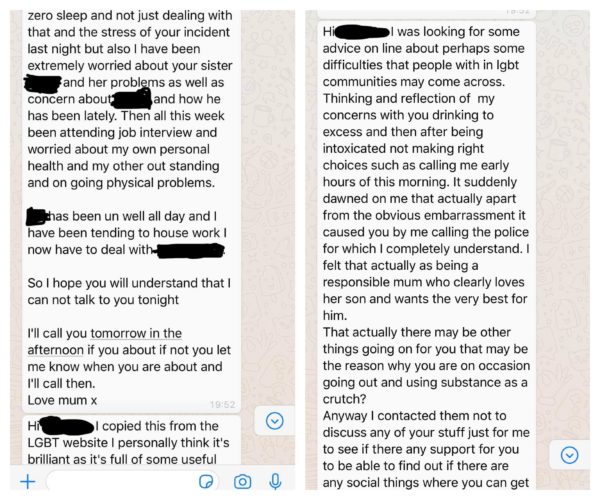 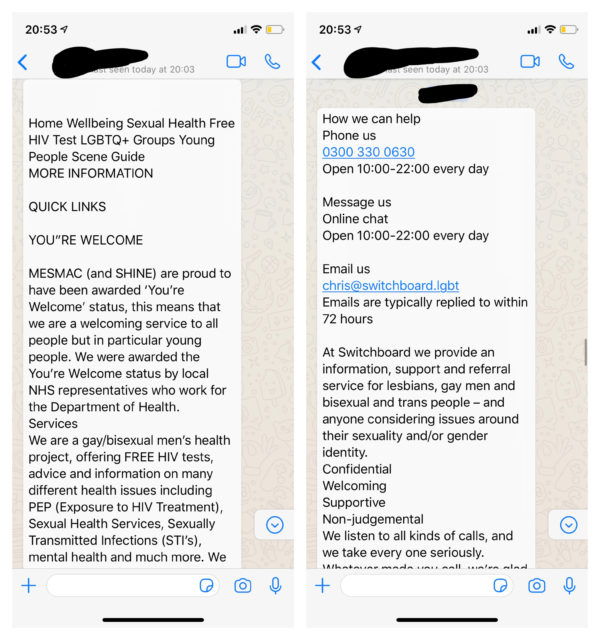 The moral of the story? Always clean up your pres if you foresee an alcoholism-driven police intervention around the corner. And never, under any circumstances, pocket dial Ben’s Mum on a night out.

“Honestly, I’m not an alcoholic. I probably drink less than the average student.

“My family is just nuts.”

Have a wilder story? DM us @thetab_ on Instagram or email [email protected].