The Zero Carbon Society is fighting back against the University after they were removed from the Sidgwick Site on Wednesday for flyering without permission.

The Zero Carbon Society was re-launched in 2015 to campaign for the university to divest from fossil fuels. Since then, they have been embroiled in several high-profile stunts, including flying black balloons over Senate House, dropping banners from King's and Clare bridges which caused wrath from the porters, and playing football on Senate House lawn wearing masks of Theresa May and Donald Trump. 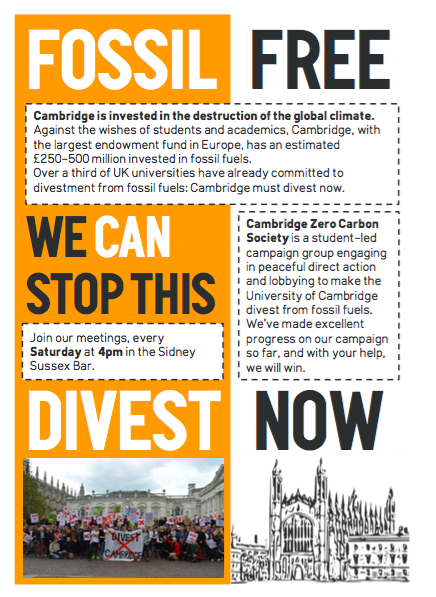 These were the flyers distributed on Sidgwick Site

Several members of the group were flyering on the Sidgwick site on Wednesday morning and were told to leave on the grounds that any flyers distributed on the site allegedly have to be vetted and approved by what the Zero Carbon Society called "an anonymous Sidgwick committee". The University Press Office in a comment confirmed that it is the case that students have to recieve permission to flyer on the site:

“The university respects the rights of societies and its members to peaceful protest, and any group who wishes to is welcome to contact the relevant facilities team for permission to carry out campaigning activities on a site. 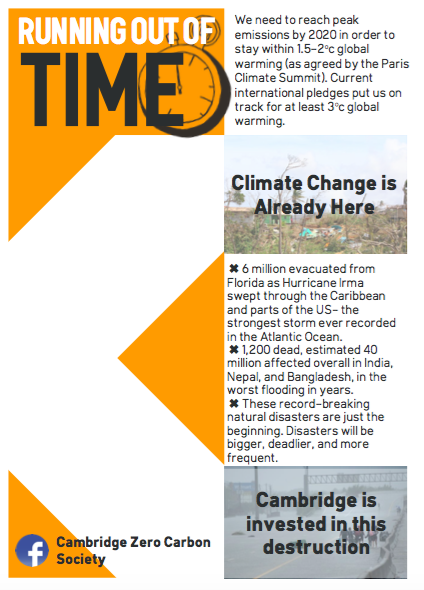 “In order to ensure that all groups members are aware of the rules for on-site activities, and for us to manage the number of groups on-site, we do ask that campaigning groups ask permission before arriving on site.

“On this occasion, the Zero Carbon group had not sought permission and were invited to do so, after which they could return to carry on their campaigning activities at a pre-arranged time.”

In addition to this, in a Press Release the Zero Carbon Society said that members were "told that free speech has to be 'controlled'" – an allegation that the University itself denies. The University says that the individual was misheard, and that when he referred to things being managed, he meant the distribution of flyers rather than freedom of speech. 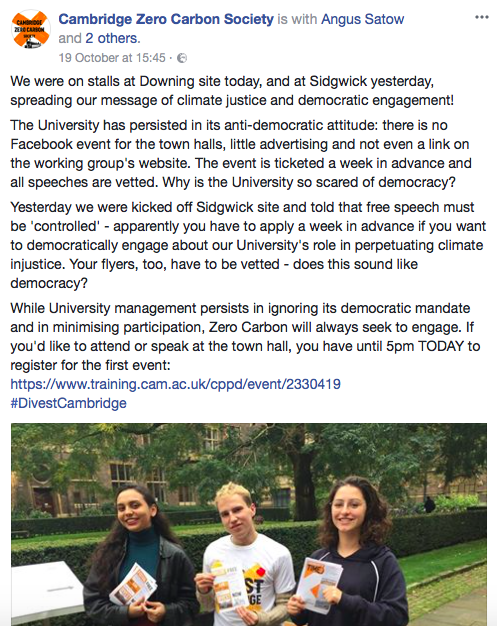 The University is currently facing growing pressure over the extent of its engagement with the wider community on the question of divestment. Its Working Group on fossil fuel divestment is holding several ‘town hall’ events where members of the University are invited to attend and possibly speak.

But Zero Carbon have criticised the Working Group’s approach as "anti-democratic", pointing out that all speeches must be submitted in advance and drawing attention to the scarcity of advertising. The Zero Carbon Society said in their press release that The Working Group refused to create a Facebook event for the town halls, which take place on the 25th of October and 9th of November. 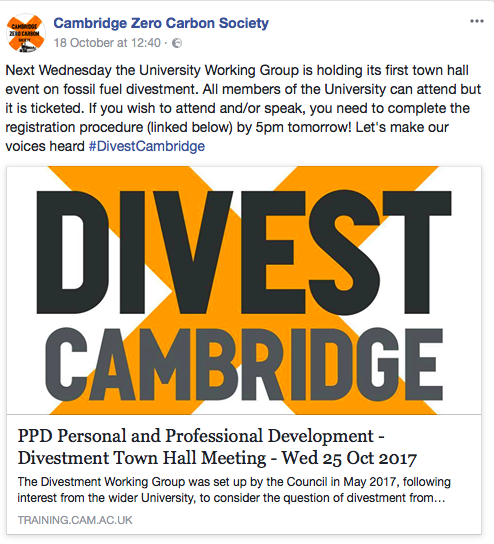 Angus Satow, former CUSU Presidential Candidate and Press Officer for Cambridge Zero Carbon, said: “From its draconian flyering policy to its pitiful outreach efforts, the University is proving itself undemocratic in every respect. If the University genuinely wanted to hear students’ views, it would abolish the requirement to register for the town halls and go out and seek the views of students and staff. Once again, it is University management stifling debate and Zero Carbon engaging democratically.”

A spokesperson for the Zero Carbon Society developed this point: “Instead of trying to micro-manage all of Cambridge, the University should wake up and smell the coffee. Students have voted for divestment. Academics have voted for divestment. The whole world is rallied around a sustainable future, a future in which the rapacious fossil fuel industry can have no part. This working group should stop considering a question long since resolved, and start figuring out how to make divestment happen.”

The Divestment Working Group chair, Professor Dame Athene Donald, said: “A key aim of these Town Hall meetings is to provide an opportunity for all concerned about these issues to voice their opinions in a respectful manner.

“The student members of the Working Group have been fully involved in designing these sessions, which aim to capture as wide a cross section of views as possible. So in addition to all attendees being invited to speak and ask questions during an open discussion at the end of the meeting, those who cannot attend are invited to submit their views in writing.

“We firmly believe these Town Halls offer a new departure for the University in terms of open consultation and would encourage everyone with an interest to register to attend.

“In addition to these sessions, the Group has invited a wide range of relevant organisations to submit written or oral evidence sessions to the working group.”

You can register to attend the Town Hall Event here.