Newcastle uni's Law society have been given a warning from their president after their Christmas party ended with smashed glasses, members clicking their fingers and waving money at staff, and throwing up by the bar.

President of the Eldon society Tara Drew emailed members and posted on the Facebook page a week after the event, which took place on 6th December.

She highlighted that on the night of the event, "there was a small group of members who acted inappropriately and recklessly" at Pitcher & Piano, where the Christmas party was being held.

It was noted Eldon members verbally abused workers at Pitcher and Piano, and were found to be "mocking staff for where they studied, threatening to sue them and waving money and clicking at them."

Tara also expressed her disappointment at the vomiting around the bar area by certain members. There had been free drink provided at the event, with the president stating "if this happens again to this degree, I will not be authorising the same amount of free alcohol given to our members for future events".

Those at the event were warned about getting too drunk and the society president highlighted the dangers of this, drawing from the case of Ed Farmer, the Newcastle Agric killed by extreme alcohol consumption during an initiation. 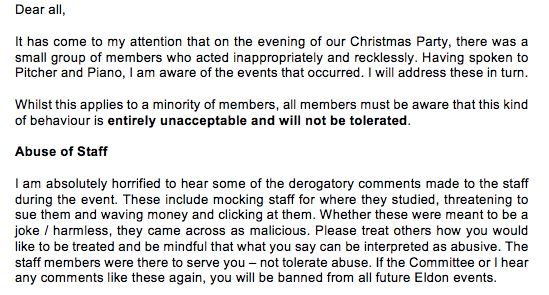 The opening of a letter to attendees of the party

Smashed glass around the venue were a "massive health and safety risk", even more so considering that the party was sold out and at full capacity. One attendee told The Newcastle Tab it was "really busy".

The event space was exclusively open to Newcastle university students, both members and non-members of the society.

The president of the Eldon society told The Newcastle Tab: "I’d just like to make it clear that it was horrible behaviour by a small group of people that have had serious repercussions for the rest of us. Eldon has a zero tolerance policy with regards to that kind of behaviour.

"The committee have been hard at work improving relationships between staff and students and encouraging greater welfare and diversity initiatives and I am absolutely devastated to hear the events and I am working closely with those involved.

"To reiterate anything like that happens again there will be an immediate ban on future events and potentially further action."

The society are now in talks with Pitcher and Piano and are very aware that events like this could allow NUSU to ban them from hosting future socials.

The Newcastle Tab approached Pitcher and Piano for a statement but they have yet to comment.

• Nothing will ruin your Christmas more than working at Primark

• Video: 600 people turned up to a Castle Leazes party