Stranger in student house was just looking for his phone

An intruder caught by a student in her house has been cleared of burglary after claiming he entered the wrong house by mistake.

Exeter student Verity Langham walked in on Neil Robinson, 38, searching through the pockets of a coat in the kitchen of her Union Road house. 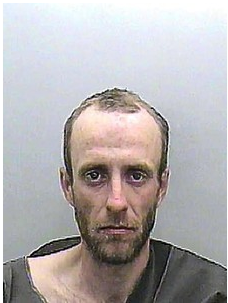 Neil Robinson had previous convictions over the past 20 years

Robinson, of Ludwell Lane, argued he had entered the student house by mistake, confusing it with another he had visited ten days earlier.

The incident, which took place in November, was taken to Exeter Crown Court, where a jury was told Robinson had a criminal record with 11 cases of household burglary over 20 years. His last sentence was in 2010.

According to Robinson, he had attended a party with a student named Annalise ten days earlier, where he drank so much vodka and smoked so much cannabis that he became confused to his actual location when leaving the next day.

He claims that after a one night stand with the student, he left his phone at the property and he had returned to retrieve it.

When Langham found Robinson’s, she confirmed no student named Annalise lived there.

James Taghdissian, prosecuting, said Robinson then pretended to call a friend in order to give off the impression he had entered the wrong house.

While Langham claims she found Robinson checking the pockets of one of her housemates’ coats, he told the jury: “I did not go in there with any intention to steal. I was not looking for anything to steal at all. I never touched the jacket.

“I picked up my rucksack from the chair which it was on.”