The Tab Lancaster sat down with Jordan Johnson, Lonsdale College Law student and creator of student app, Magknit, to talk about the Tinder and LinkedIn hybrid that we think will be taking our campus by storm.

What's the main point of the app?

"It's really difficult to get experience whilst at university. What you tend to do is go for society roles, which is great, but there aren't that many roles, and lots of students apply for them. On top of that, maybe society roles aren't what you want, because you don't want that responsibility for other people – you'd rather work on your own project with somebody else. And you can use this to build your own portfolio before you reach that LinkedIn stage and say 'Look, this is me.'

"I have a lot of friends who've graduated, and they've got to a point where they have no work experience and no CV, and although they've got a First Class degree, it's not enough. How can you differentiate yourself? The idea's that you use Magknit as a platform to look for other students, or business ideas, or charities or societies and you can build your portfolio and sharpen your skills. There's something broken about university that means you only come out with friends, but you need to have other people who can help you get somewhere. Lots of jobs are filled through networking."

Why did you make it? 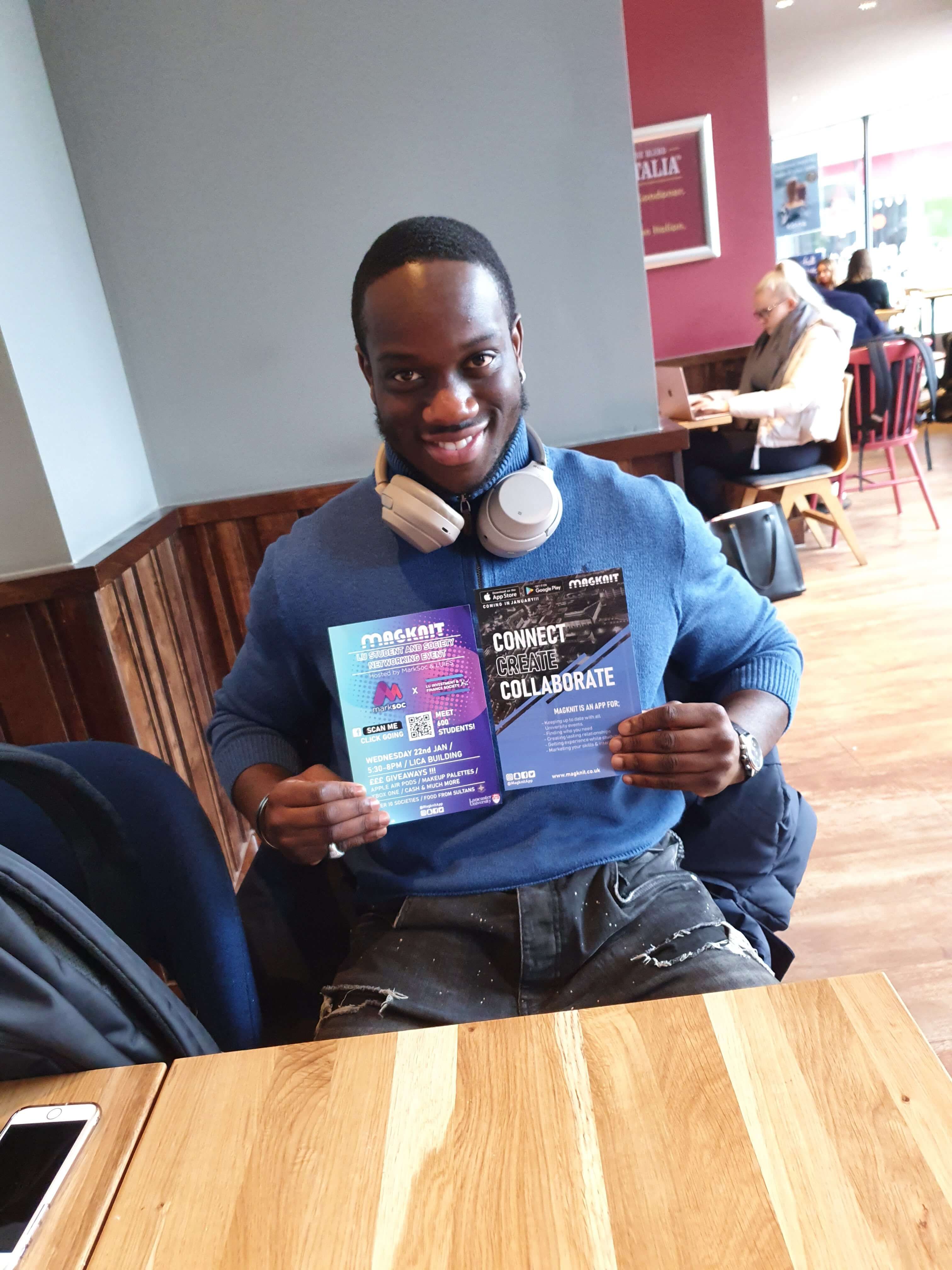 "Because when I first came to Lancaster I always had ideas to bring people together; I started a YouTube channel that was helping people understand other's faiths. I had to stop because I didn't have the resources to continue, but I thought it would be great to find more people who'd be interested in joining.

"I thought: 'There are 14,000 students at this university, there must be at least 20 or 30 people who'd be interested in joining – WHY is there not a tool to help find people willing to work together on projects.' So we needed to create a platform that allows students to network with ideas, and skills – that's where the original idea came from."

"This is difficult, because I recently turned vegan in the last week-and-a-half, so it has to be the sausage roll. Now I'm into the vegan sausage roll, which doesn't taste AS good, but I'm just eating it for health reasons."

Why should students download this app, rather than other ones?

"We incorporate a lot of the best features from different platforms; LinkedIn, Facebook, Snapchat, and we've also made it our own, for this generation. Most students don't have LinkedIn, especially first and second years; they download it once they need to get into the job market.

"So what's that stage before LinkedIn? LinkedIn says 'Here I am, I'm ready for work,' but what else can you do around that, to show you're more than just your degree? Our platform allows you to do that. When I advertise something on Facebook or Instagram then people get tired after the second or third post, especially if you haven't built that platform to the intent and purpose of advertising what you're doing. And with that, it's not the same." 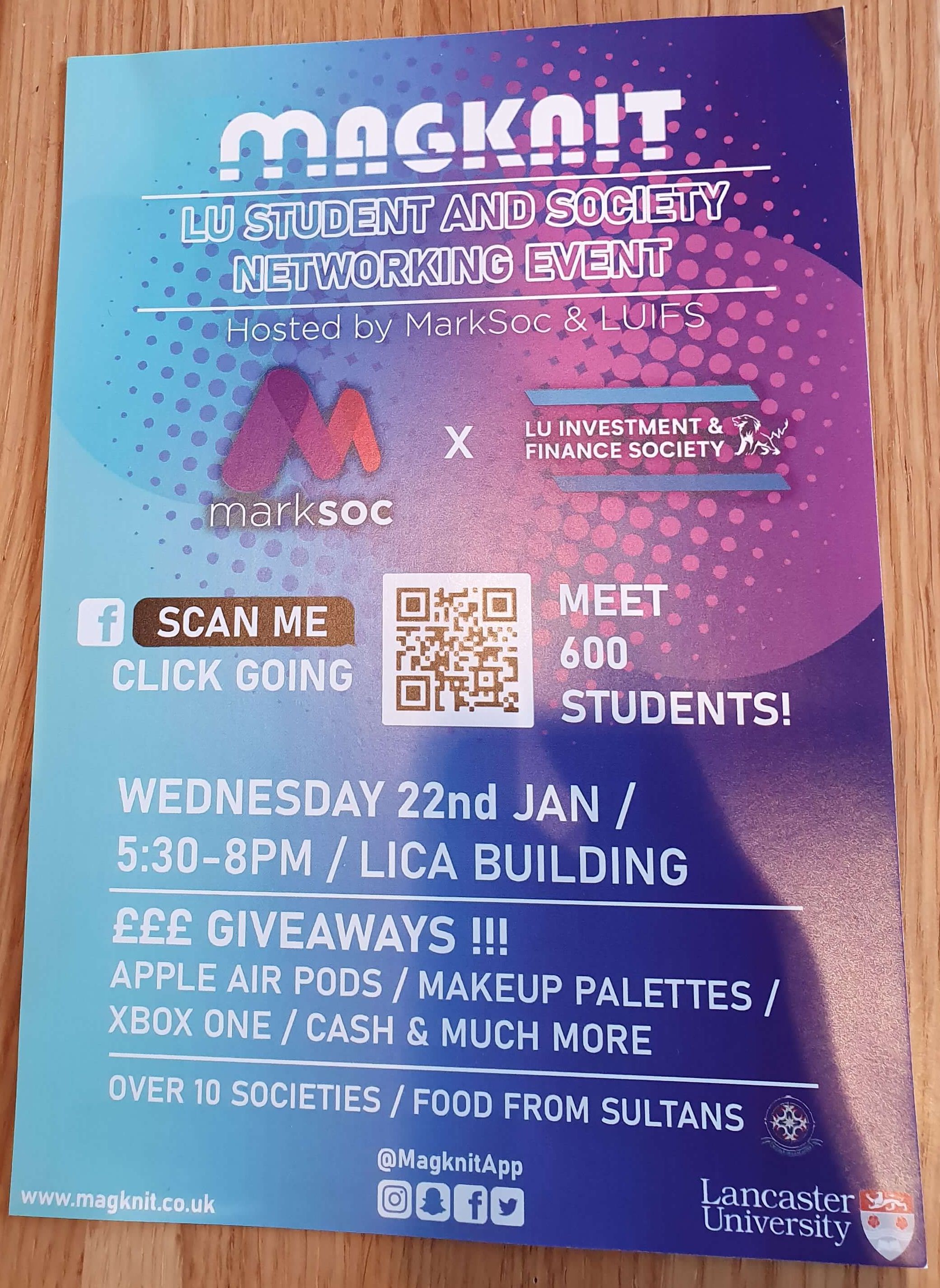 Sugar or Dalton's, and why?

"Dalton's because of my background. I'm Afro-English, and they play a lot more music that's tailored to that. Sugar does as well, but sometimes Dalton's Latina nights are more appealing, and they also have the Legends nights too."

Is there a Magknit team, or are you a one-man unit?

"Absolutely not, so even though I started this idea two-and-a-half years ago, I'm not a tech guy; I can't code, I understand stuff but can't actually do it. We have capital, we have investors, and we're in that testing phase now. We believe in it, and everyone we've pitched it to have said that it's a good idea, and it makes sense.

"I brought on a coder last year, Sid, and he has the side that I'm weak at. He's brought the tech side, and he looks at things, adds a lot of value through bringing his own ideas. We've also partnered with Marketing Society, and brought on three members from them. Finance Society have also been amazing to help set up our launch event. I've also got a big team of volunteers who've helped to make this a success."

You've been here for four years, what do you think is the best study spot in Lancs?

"It's one of two places. C floor sat in the library, when you come up the stairs there's the couch area, and there are those tables there – they're always filled up, and I never get there in time to grab one of those. Or it's my room. I like to kind of be in my own environment, be comfortable, walk around barefooted and just in boxers and work, if I want to!"

What's the next step?

"Getting people to the event is the main thing. Apple do a launch event, then release the product a month after – we're following that lead. If you come to the event, you'll receive a link that will allow you to beta test the app. Making sure that we know exactly what students want. After that we want to take it global. Obviously starting in Lancaster, but expanding the business."