This student is demanding a £2,250 refund for the lectures missed due to the strikes

After it was announced that King's lecturer would be going on strike over a period of four weeks, one student has demanded a refund from the university.

Catrin Preston, an International Relations student, emailed Principal Edward Byrne asking for a refund of the 14 days of uni that will be missed due to the strikes. She claims that due to the principal's large paycheque, he is responsible for the pension losses which have caused the strikes.

Catrin published her email on Facebook after feeling dismayed at the lack of communication from King's regarding contingency plans, what departments will be affected and how classes will be rescheduled.

She wrote: "Big up to the lecturers striking against dramatic planned changes to their pensions. Appalled (but not shocked) to learn today that the principle of King's College, by contrast, pays himself £458,000. Hope he enjoys all that money." 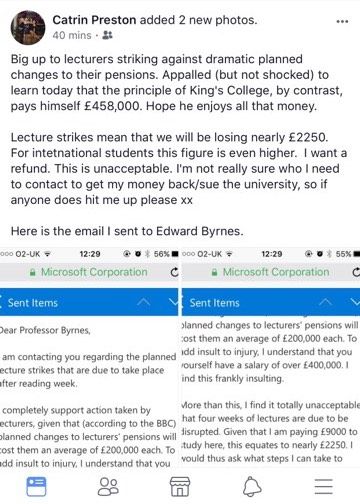 Her email explicitly outlines that while she supports the legal action taken by the lecturers as a result of modifications to the pensions of staff, students are the most inconvenienced by it and therefore deserve to have some sort of compensation, or knowledge of what will happen during the strikes.

With this in mind, she asks Principal Byrne for the "steps I can take to receive a refund of the money (£2,250)".

When speaking to Catrin, she told The Tab King's: "For me personally, I only get 10 contact hours a week so for up to four weeks of these to be slashed is just unacceptable.

"Like I said in my Facebook post, this equates to almost a quarter of this year's fees. But I also wanna make myself clear that I completely stand with the lecturers, because what is happening to their pensions is disgraceful."

Let's hope King's all give us our money back, or failing that, at least give us our coursework results on time as the first step to making us feel better about life.