Get The Look: Red Dresses

Taylor Swift can sing about how loving Conor Kenedy/Taylor Lautner/Joe Jonas (ew, gross) was so ‘red’, but far more important is the re-emergence of red as the power colour of […]

Taylor Swift can sing about how loving Conor Kenedy/Taylor Lautner/Joe Jonas (ew, gross) was so ‘red’, but far more important is the re-emergence of red as the power colour of the season, especially on dresses.

Perhaps it’s because people are in a romantic mood. Maybe it’s because the communists have made it cool (I doubt it). But whether it’s a deep burgundy or a bright tomato-infused hue, red is ‘in’ as Heidi Klum would say.

Red is said to be a visual aphrodisiac. It’s associated with a lot of things. It’s hot like salsa and it’s flashy like a Ferrari. The connotation of the colour is a contradiction itself: red can mean love and hate.  Not to mention it has been the well-loved colour of choice for notable fashion influences such as Diana Vreeland, Diana, Princess of Wales and Nancy Reagan.

A recent example of the red dress was Rihanna’s custom made Azzedine Alaia at the Grammy Awards. It was graceful and classic without losing a thoroughly modern feeling with its sheer panelling. Notable also is her effort to soften the look with loose hair and minimal jewellery.

Another woman who seriously hurts for appreciation of her good looks, Diane Kruger, wore a sexy, fun and short red dress out on the town without being over-the-top. Sparse jewellery compensates for the loudness of the red (and those fabulous leopard print shoes).

An ode to the red dress could not be complete without homage to the man who built a fashion empire around his very own ‘Valentino Red’ . Valentino Garavani retired in 2008, but his hue lives on. In the fashion house’s Spring 2013 Ready to Wear collection featured a sleek, loose and long interpretation take on the classic number – (See the header photo). 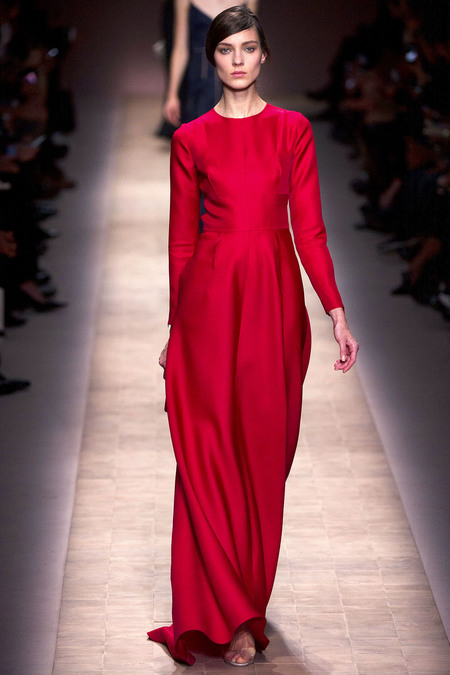 If you’re the go big or go home type (who isn’t in St Andrews?) you can take the trend to the extreme and match your flat décor to your dress as Diana Vreeland did in her so-called ‘Garden in Hell’. Now that’s hot, hot, hot.

Here are my favourites I’ve found online to buy!! 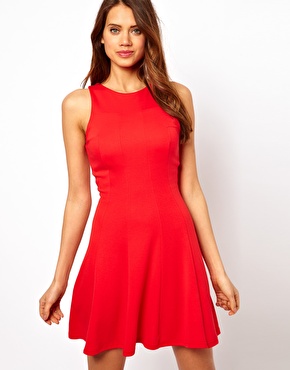 Fun, simple and flirty, this dress is bright red and ready to twirl.

If dark red is your thing, I recommend this stunning (and convertible) number from Shop Bop.

This frock has a lovely silhouette and can be easily dressed up or down depending on the event (or non-event).

I like how this asymmetrical dress is a loud tomato red with embellishment yet it keeps its modesty through its loose shape.