The post detailing the reasons for the resignation went up today

The SU press release regarding Prydderch’s resignation states: “We are aware that Hannah Prydderch, Vice President (Union Development) has announced her intention to resign her role with immediate effect. Naturally we are very saddened by Hannah’s decision, but we will respect her intention and support her in any way we can. We will ensure that Hannah’s duties are fully covered until the new elected officer team takes up office.

“We understand that Hannah has explained her reasons for resigning her post. We will not be making any comment. We would like to thank Hannah for her work for students at the Union since her election and the contribution she has made to the team during her time here. We wish her well for the future”.

Prydderch has since posted a statement on her personal Facebook page. The statement reads: “First of all I would like to say a huge thank you everyone who sent me lovely comments and messages, your kindness and support means the world to me.

“Resigning as your Vice President Union Development at Lancaster University Students’ Union has broken my heart and I would like to say that it was not due to any students, College or Part-Time Officers, staff or Trustee Board. However, there is a toxic culture in the SU, which despite everything that has happened this year, hasn’t changed from how it was when I started in June.” 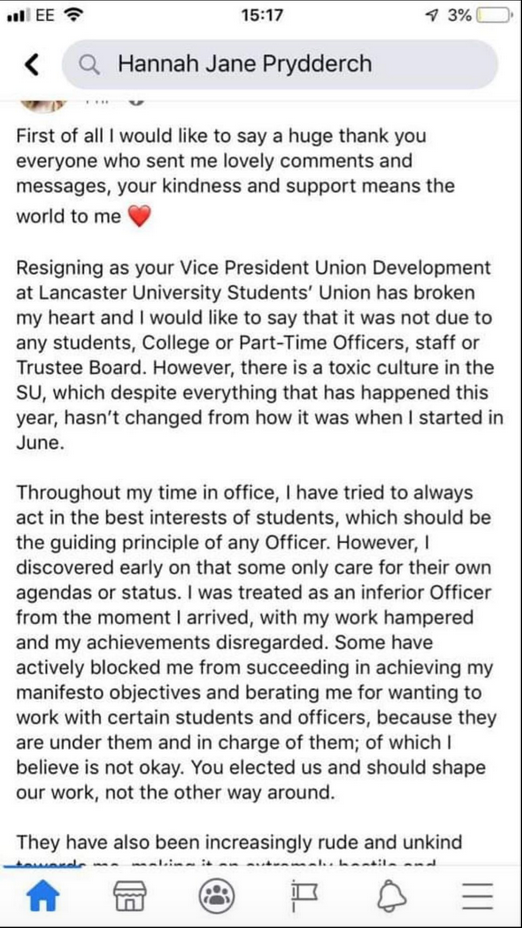 “Throughout my time in office, I have tried to always act in the best interests of students, which should be the guiding principle of any Officer. However, I discovered early on that some only care for their own agendas or status. I was treated as an inferior Officer from the moment I arrived, with my work hampered and my achievements disregarded. Some have actively blocked me from succeeding in achieving my manifesto objectives and berating me for wanting to work with certain students and officers, because they are under them and in charge of them; of which I believe is not okay. You elected us and should shape our work, not the other way around.

“They have also been increasingly rude and unkind towards me, making it an extremely hostile and unwelcoming environment towards myself and other people. Initially I tried to bond with the others and joined in with their jokes, however it got to a point where I could not continue to do this and tried to actively call out the behaviour but was too afraid as I frequently felt ganged up on and brow-beaten into being silent. I’ve painted a smile on my face for months, being told to repeatedly forgive and forget.

“I know there will be some of you out there that do not believe me and that’s okay, everyone is entitled to their opinion. As I’m sure you’re all aware, I’m by no means the first person to resign their position at the SU due to this toxic workplace culture and I’m sure I won’t be the last, so long as things continue as they are.

“I implore you, don’t let the Sugarhouse victory blind your ability to hold Officers to account for their decisions and behaviour.

I’ll miss the SU and all of you at Lancaster and I wish there was a way I could have stayed.” 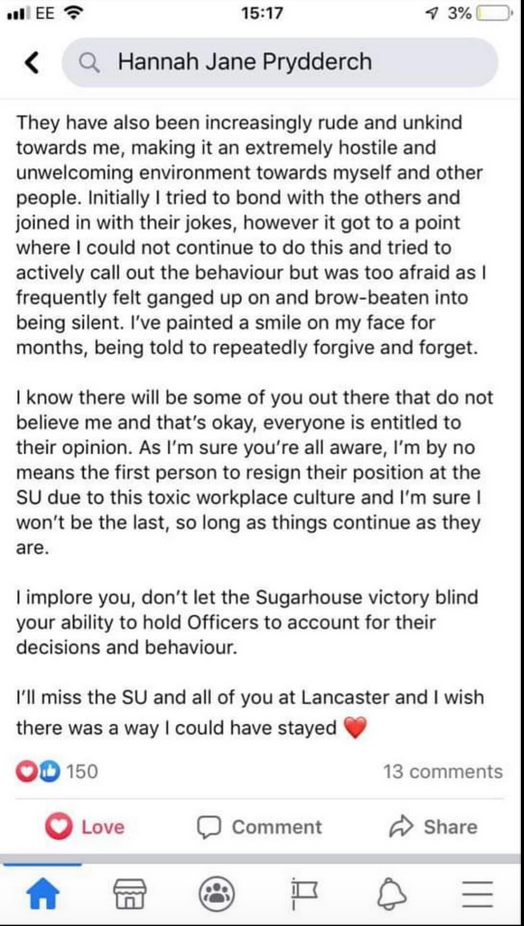 Following Prydderch’s resignation, the FTO Facebook Page was updated showing a removal of Prydderch from a photo of the Full Time Officer’s. 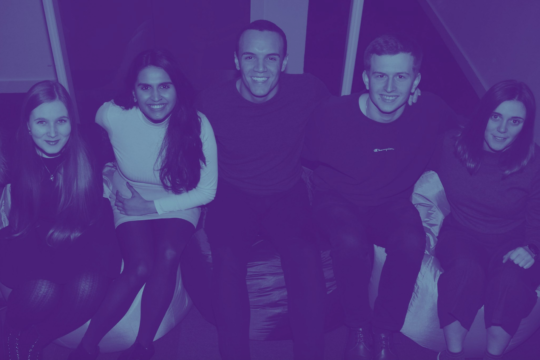 The response to this has been overwhelmingly negative. One user commented “Absolutely disgraceful…you should all resign”.

Prydderch’s mother has also commented, stating “This shows how much you care about the well-being and mental health of my daughter. Disgraceful”.

Another states “The level of petty and disregard is frankly horrific. How many people will have to resign from the SU before something is done about this kind of behaviour?”

This, of course is a reference to the resignation of former VP for Activities Ben Evans, who left his position in October of last year, following controversy regarding the sale of Sugarhouse. Evans also cites a deterioration in the relationships between FTO officers as one of the reasons for his departure from the Students’ Union.