The university has pleaded with students not to post on Cardiff University Confessions, claiming its admins could use stories against you in the future.

A message from the uni on the Facebook page, which has nearly 1000 likes, accuses the gossip feed of “putting people’s dignity and privacy at risk”.

The anonymous people or person behind the group promise it will remain anonymous, and so far they have kept their word.

The page’s admin even warned they would not be posting photos sent in, as they could reveal people’s identity.

Since the site launched on 9 October, it has been flooded with hilarious confessions.

One student wrote: “A few nights ago two of my flat wenches (flatmates that are wenches) went on a night out to tiger tiger. Whilst in the club, one of my flat wenches was fingered by what can only be described as a well established LAD (mid 30’s) by the toilets.

“My flat wench then proceeded to perform a victory dance to my other flat wench, whilst holding up her four fingers, indicating the ‘well established’ LAD had indeed managed to fit four fingers up my flat wenches nether region. Needless to say this has lead to countless jokes in our flat: such as the “high four”, instead of the classic high five.” 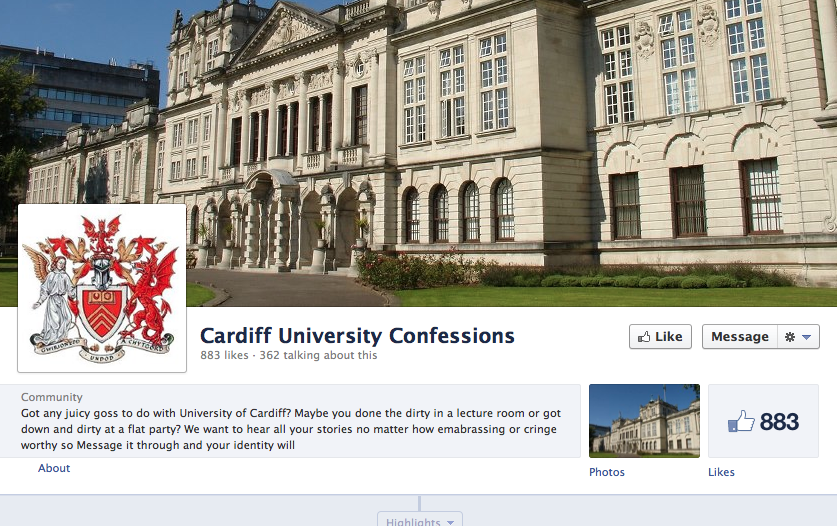 Elsewhere in the country, universities have acted to close Confessions pages down, by claiming they are illegally using trademarked name.

So far Cardiff has only tried to appeal to its students’ sympathy, it remains to be seen if they will take further steps.