A tinselled bicycle and a retrograde floor lamp framed the stage for Tuesday night’s Music is Love gig, transforming Venue 1 into an intimate space for the quaint and the fanciful. In this atmosphere, with most of the audience sat cross-legged on the floor, the evening seemed more suited for listening to stories than wild dancing. The night’s performances fit in well, offering an impressive triple act of alternative and antifolk singer-songwriters, with both Men Diamler and Withered Hand opening and Jeffrey Lewis and the Junkyard headlining. 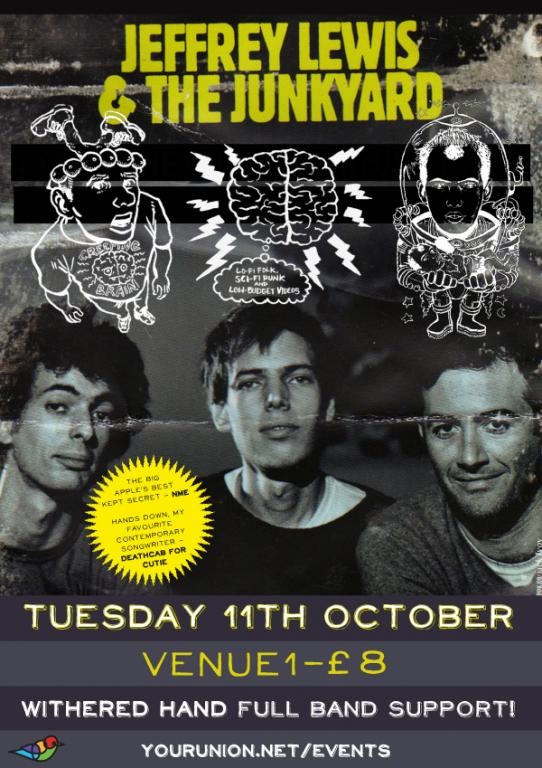 Performances were riddled with various tech and sound problems, which meant that Men Diamler sounded a cappella with his muted guitar barely audible, while a dysfunctional microphone left Withered Hand’s Dan Willson struggling to be heard above his backing band. Fortunately, all this mattered very little – in fact, it reinforced that this was to be an evening about voices and words more than rhythms and melodies. All three performers are unarguably talented musicians, but I think that much of their strength lies in their lyrics.

This especially applies to Jeffrey Lewis, who has been praised as ‘the best lyricist working in the US today’ by Jarvis Cocker. Although the four-piece band was enjoyable and many of the songs were danceable, Lewis is perhaps strongest when he is simplest – when the lyrics are really in focus. These are lyrics that are puzzling and peculiar, as concrete as they are fantastical. They speak of his personal life – his home and his relationships – as well as tell stories about space adventures, pigs and zombies.

Lewis doesn’t just tell stories with his music – he draws them as well. As a gifted artist (he publishes his own comic book series called Fuff), he integrates his drawings with his musical career. His comics were projected onto a screen and narrated through rap and song – first a story about an alien visiting earth and later a brief synopsis of the French Revolution.

With three long acts, Tuesday night’s performances extended until the Union’s closing hour when the sleepy audience was finally forced to leave. And although often upbeat and lively, the event nonetheless served nicely as a musical goodnight story for the concert-goers of St Andrews, spurring careful listening, gentle swaying and dreamy contemplation until we were ushered out and off to bed.