Melancholia speaks for itself

To review Lars von Trier’s Melancholia without any quips referring to the National Socialist Party of Germany is my Everest. Indeed, the Danish director’s comments to the press at this […]

To review Lars von Trier’s Melancholia without any quips referring to the National Socialist Party of Germany is my Everest.

Indeed, the Danish director’s comments to the press at this year’s Cannes Film Festival in May make uneasy reading (and viewing – the video footage sees Kirsten Dunst perched uncomfortably beside him, her inner monologue screaming “Shut up, Lars! Shut up!”). Free speech debates rattled around in the following weeks as, rightly or wrongly, the festival booted him out on his ear (along with his Palme d’Or nominated film).

Even after we’ve all been over-exposed to the technique through various adverts for Sky HD, Melancholia’s opening sequence is a vivid, jaw-dropping use of slow-motion that both displays the splendour of the film’s country estate setting and provides a rather abstract vision of the apocalyptic events to come. What follows is divided rather neatly into two parts. 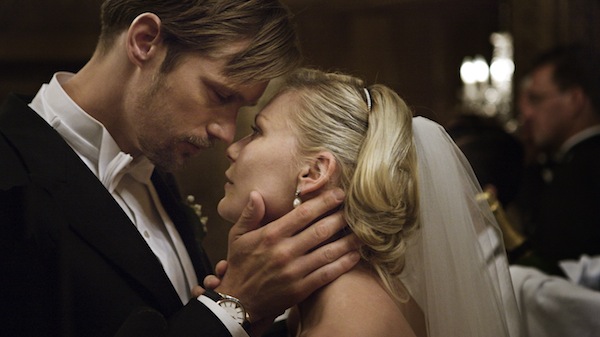 The first is a party for Justine (Kirsten Dunst) and Michael (Alexander Skarsgård), a young newlywed couple. The extravagant celebration has been laid on by her sister Claire (Charlotte Gainsbourg) and her wealthy husband John (Kiefer Sutherland – who, disappointingly, isn’t given 24 hours to save the Earth). As festivities begin, we are introduced to doting father Dexter (John Hurt), the embittered, malevolent presence of mother Gaby (Charlotte Rampling) and Justine’s tenacious boss Jack (Stellan Skarsgård). This section displays the smorgasbord of acting talent recruited by von Trier, as we see Dunst’s Justine exposed as a far more complex character than a mere blushing bride.

Following the unravelling of the wedding evening, Part Two begins. Charlotte Gainsbourg is a master of the pensive, restrained matriarch, and here she is called into action once again. When a worn-out Justine comes to stay with Claire and family it is the week of the anticipated ‘fly-by’ of Melancholia – when the planet will pass by Earth at close proximity. Already what you could describe as a little more than a ‘nervous Nellie’, Claire’s anxiety reaches fever pitch, despite the assurances of her husband and the enthusiasm of her young son.

Kirsten Dunst will blow you away in this film, with what is undoubtedly the performance of her career (as reflected in her Best Actress gong at Cannes), but the lion’s share of the credit and plaudits should be aimed in von Trier’s direction (along with a voucher for public speaking lessons). His film is punctuated with moments of truly virtuoso film-making (and a dollop of prolonged nudity sure to satisfy any teenage boys who stumbled into the cinema looking for Shark Night 3D) that complement a fine script. Part Two excavates the unspoken tensions of Part One and leads to a (quite literally) Earth-shattering climax that would surely have Roland Emmerich applauding from his seat.

The Dane recently released a statement declaring his intent to never give another interview or engage in public speaking again. Based on his recent track record and having watched Melancholia, perhaps it is best if he lets his films do the talking from here on out.