She wants to focus on improving recycling, and the Uni’s catering services

We spoke to Emily Harrison, the current VP Student communities, about why she wants to continue working as a sabbatical officer and what she hopes to achieve, as well as some important stuff involving nuggets.

Why do you think you’d be good in this role?

I'd be good in this role because I've worked at the Union as a sabbatical officer for the last 7 months now so I know exactly how to do the job and make real change. I've built up a lot of good relationships which will help to come in and hit the ground running. I also love what I do alot (Clearly, or else I wouldn't be running to stay another year!) which is important because it's not always smooth sailing!

What is the most important point in your manifesto?

Introducing a recycling reward scheme. There's been some fantastic work by the VP Welfare roles in the last couple of years to help reduce waste and work towards a more sustainable Union. Now we need to branch that out and get students more involved. Recycling is a really easy way to make a big difference. By offering incentives, such as vouchers for Union outlets, I hope that we can engage the larger student body to get involved in tackling Sustainability issues!

What is the first thing you’d change if you were elected?

Working with the University to start a University- wide review of catering. We need to make sure that we're catering to all student needs in a way that's sustainable and affordable for the students, the Union and the University. I would love to have much more international food and drink (This year I've had so many people asking me for Bubble Tea!) Also is anyone else keen for a 'Make your own sandwich' counter in Bar Three?

What area of our Student Union do you think needs the greatest improvement?

Increasing our presence at all sites. Being out at a remote site can be isolating and I want students to know that we are really here for all students, wherever they be and whenever they need us. I've done a lot of work this year to recreate a model similar to the one we have at Winchester School of art at Avenue, which I'm excited to see come to fruition. Next year, I really want to continue working to deliver this at all sites.

What makes you different from the other candidates also running for the same position?

The fact that I'm a sabbatical officer already! Over the last 7 months, I've had the experience of what it's like to work in this job, how to work with students and the University and get things done. Successes like introducing the WSA weekend shuttle bus shows I can actually deliver, not just make empty promises! I know the challenges that you face- No one can deny it's been a pretty tough year and I've managed to go through that and come out stronger so I'm more prepared than anyone for whatever this job can through at you!

How would you celebrate if you won?

Treating myself to branded vodka not just sainsburys own? No for real, I'd be celebrating with all the people that have supported me not just through the campaign period but throughout the last year. And also with all my new fellow teammates!

I have a talent for finding super cheap holidays. A few weekends ago I found flights and an apartment for three nights in in Ukraine for £68! Give me an destination and I'll find you an insane deal. I've also really learnt the knack of squatting in heels.

What is the maddest thing you’ve done since being at Uni?

Being part of Southampton RAG in second and third year has given me lots of mad anecdotes that are great during games at parties! I would say it's probably a toss up between a skydive, hitchhiking from Southampton to Glasgow with no money or being part of the team that raised a record breaking £229K for charity last year!

Nuggs. I never go out without making sure there's some in the freezer!

What is your favourite Soton tab meme?

Well given my campaign theme, it has to be the one of Troy giving Gabriella the T initial necklace. She asks if the T stands for Troy and he replies 'T as in Tariq Manzils'. You've got two absolute legends in one, what's not to love? 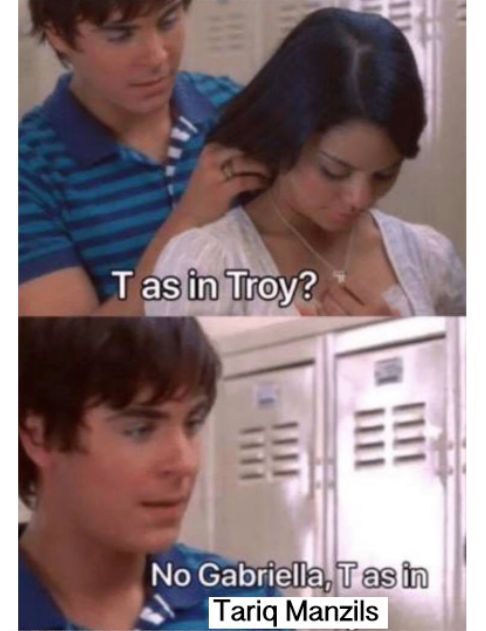