Students’ Union budget to be slashed by 15 per cent

LUSU negotiated a lesser budget cut with the university

Lancaster University Students’ Union has announced that its budget is to be cut by 15 per cent in the coming academic year. This comes after the statement announcing that the budget could be cut by up to one-third in 2020/21.

In a statement released online, the Students’ Union said: “While we are glad to have reached an agreement to reduce our block grant cut down to 15 per cent from the suggested 33 per cent – we will continue to lobby the University to increase our block grant for future years, in line with our policy to ‘Campaign for an Increase in our annual Block Grant from Lancaster University’.

“Considering the future, we must grow our block grant funding sustainably to allow us to maintain and improve provision for students as student numbers increase. Despite the improved situation regarding the grant cut for this year, we must also factor in the negative effects of COVID-19 on our commercial services.”

The university slashing the SU’s budget was the latest in a number of cost-saving exercises by university management, in order to combat the projected losses caused by an expected reduced number of international students learning at Lancaster as a result of the pandemic.

In order to accommodate the budget cuts, LUSU has already began pulling student services like the Purple Card. The Union has also cut college JCR budgets by 80 per cent, and is contemplating the future of the on-campus store, Central. 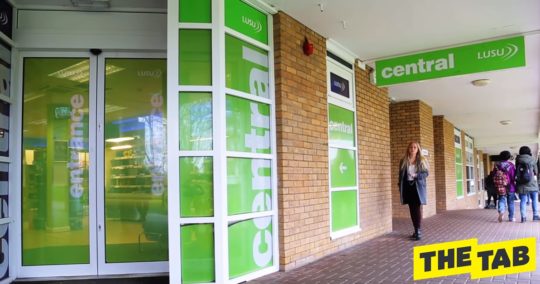 The Union admitted that its commercial services are running at a loss: “Less income will be gifted to the main charity to fund areas like societies, JCRs or Advice. We are still unable to re-open The Sugarhouse, which makes nearly 50 per cent of its profits in the first month of Michaelmas term alone, due to government restrictions.”

Closing the statement, the Students’ Union promised to release an updated financial budget – something that was called into question in previous weeks because students were forced to sign non-disclosure agreements in order to participate in the budgetary focus groups.

‘This person was caught by Sugarhouse staff doing Nazi poses’

Online seminars and grad schemes: What life is really like as a third year at Lancs Uni

Applying for every graduate job, even if you know you’ll hate it

Your house will turn into a man cave

‘Students from the UK still have the option to go back home, but international students don’t’

We transformed our bedrooms into Lancs campus bars, and went on a ‘house crawl’

Who said Covid had to ruin our university experience?

Sports and society events have been temporarily suspended at Lancaster University

We asked Lancs students how they felt about online learning

After being placed in Tier Two, we’re now set to go into Tier Three – here’s what that means

The 25 year-old battled her condition with ‘strength, bravery and determination’

Could live off Maccies everyday

These students are so talented!

The government was expected to announce tougher restrictions for Lancs

‘The Sugarhouse is unable to meet its running costs due to the social distancing requirements.’

Lancaster University students expected to wear masks at all times