An exchange student has traveled to 25 countries in eight months

He does a lot of sleeping in airports

It is the end of the term and almost the end of the academic year. While most of us are pulling all-nighters to rush our 3,000-word essays, or cramming in slides before the test,  Andrew, a 20-year-old Taiwanese student manages to take some time off his “heavy and intense” studies in his exchange semester abroad.

He’s visited an impressive 25 countries in eight months, so we asked him how he does it.

Where are you studying right now, Andrew?

I’m studying International Business and Marketing, in the School of Business and Economics, Maastricht University.

How do you feel about the workload?

This university is known for PBL system. It emphasizes more on discussions and debates. There are only two tutorials a week but each lasts for two hours. And of course, we have to study beforehand. The highest record I have is to study 300 pages of academic readings. 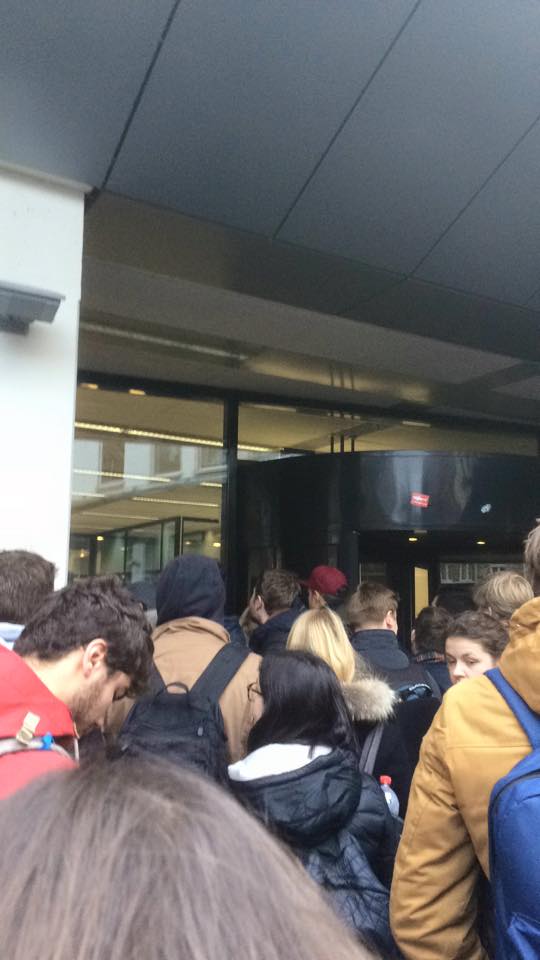 Students lining up to get into the Maastricht Universty library in the morning.

How do you find yourself enjoying your exchange semester in this “military school” then?

Well, I find a way of work-travel balance becauseI I enjoy traveling around.

How frequently do you travel?

Since I’ve already been here for eight months, I’ve been to 25 European countries so far, travelled six weeks alone during winter.

Wow, where have you been to so far?

I went to Ireland, Scotland, Italy, and all the Balkans (except Serbia) and Sweden. 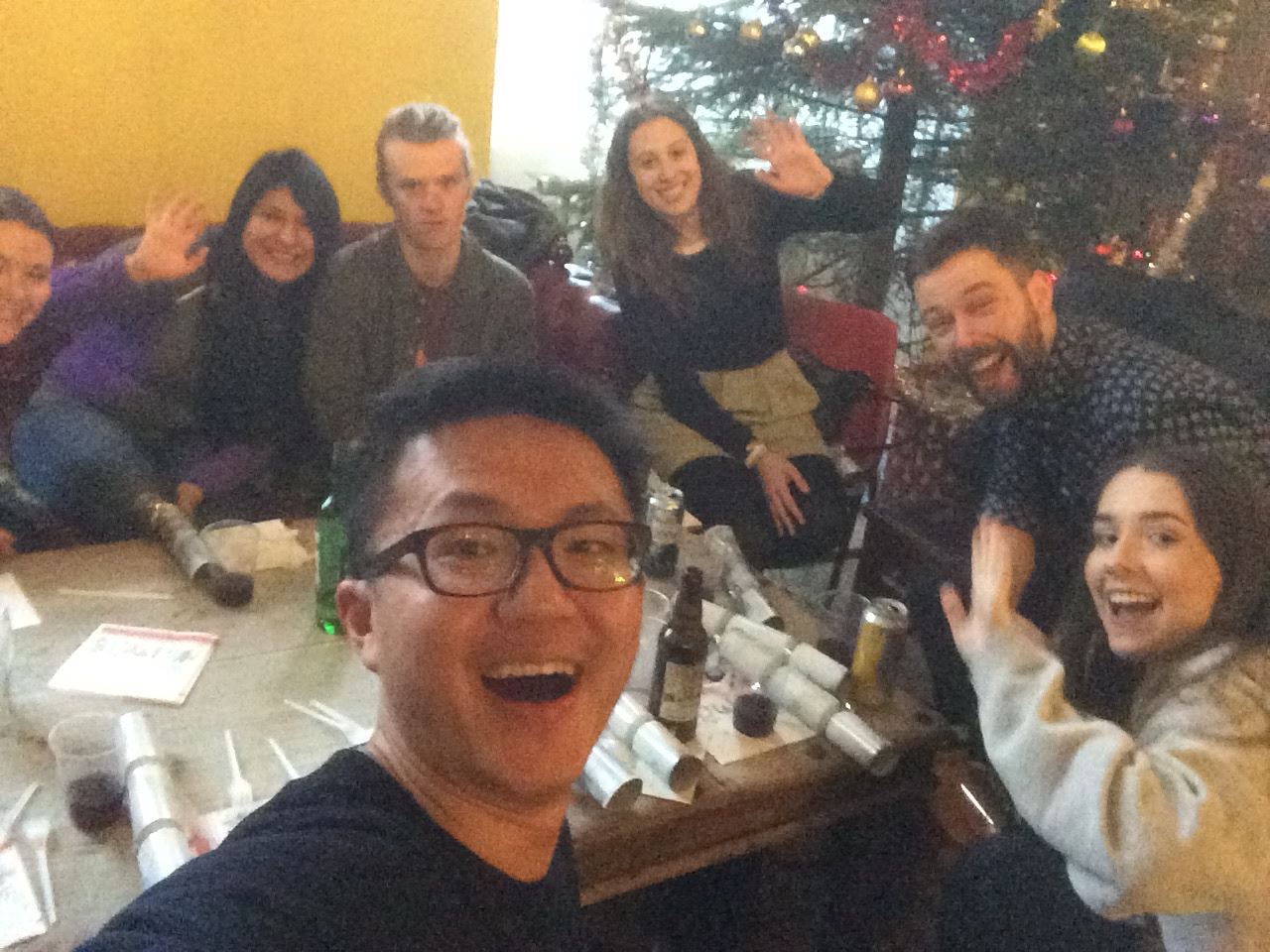 Chilling with his American and Australian hostels mates in Edinburgh.

Do you always plan your trips ahead or it is totally out of spontaneity?

Yes, I do plan but not always. Sometimes, unpredictable events happened like once, I didn’t book a hostel room and buy transport ticket when I was in Skopje, Macedonia, and in Sofia, Bulgaria. It’s because I was invited to join an interview with Apple in London. And they paid for my ticket to go from Skopje to London and backward. So I could not have planned ahead.

What are your secrets to low-budget travel?

I have slept in seven airports so far, tried couchsurfing, lived in friends’ places, budget hostels and carpooling etc. And that’s that one thing I don’t like about England, the public transport is freaking expensive. Also, budget airlines such as WizzAir, Ryanair are my saviours. 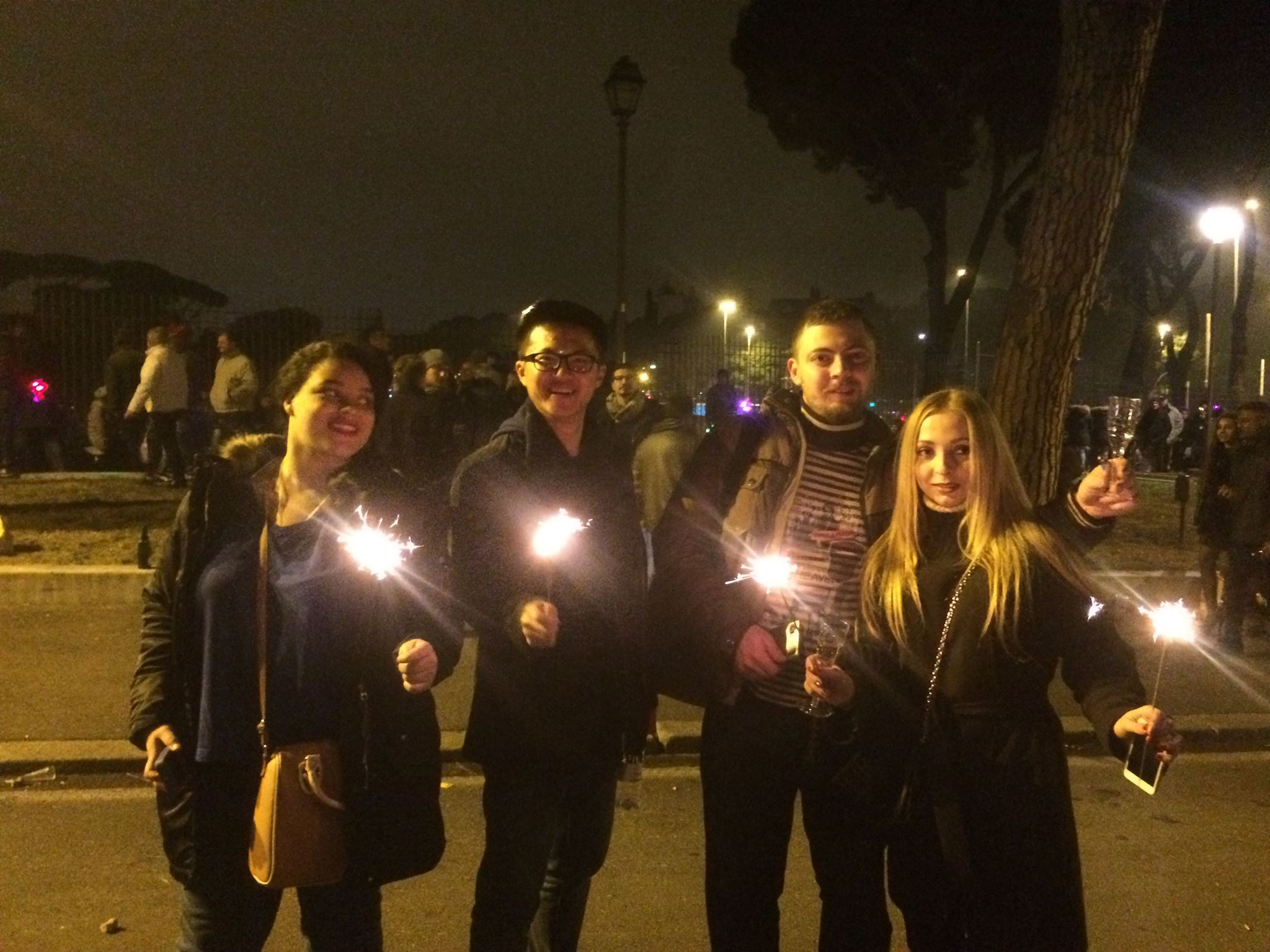 Celebrating the New Year’s eve with an American girl and Ukrainian couple!

What do you usually do during your trips?

Instead of going to the tourist attractions, I would usually go to a local university and often talk to the locals. For example, I sat in on a lecture in Warsaw University of Technology. And I went to a public lecture in LSE when I was in London. I even studied in the school library of one of the best economic school in Norwegian School of Economics. It is like studying aboard while studying aboard.

You would learn more about a country that way than merely visiting the tourist attractions, and Instagram about it. Also, the cultural experience is something that we can take away and learn from for the rest of our life. And it would be a great conversation ice breaker if you meet someone from that country. 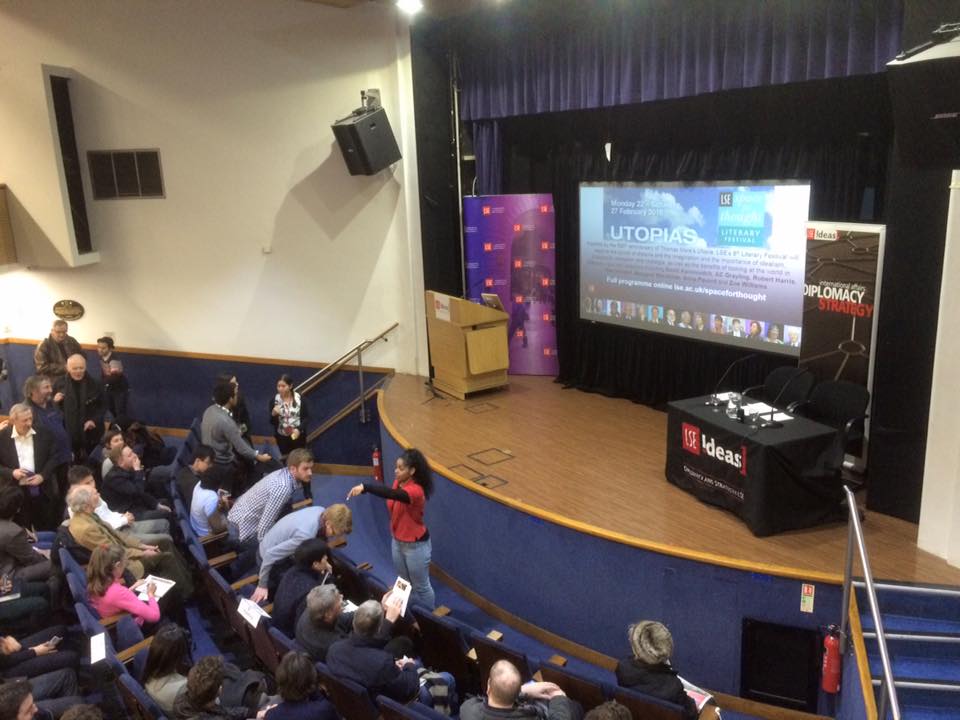 Sitting in on a public lecture given by Ian Morris at LSE.

Did you get to meet anyone interesting?

I once met a girl when I was traveling around Dublin. She happened to be a student from Stockholm University. She was kind enough to meet up with me and show me her campus when I flew to Stockholm. We even had dinner together. If I hadn’t been this open-minded, I wouldn’t have been able to have a taste of diverse European cultures.

Any unforgettable experiences then?

I was staying in a mixed room, and a German guy and a Serbian girl were having sex just right beside the bed of mine. There were only curtains and I was woken up by them “working”.

Another time, I flew from an airport that was near the Brussels Airport on the day that the Brussels bombing occurred. Tight security and lots of checkpoints. 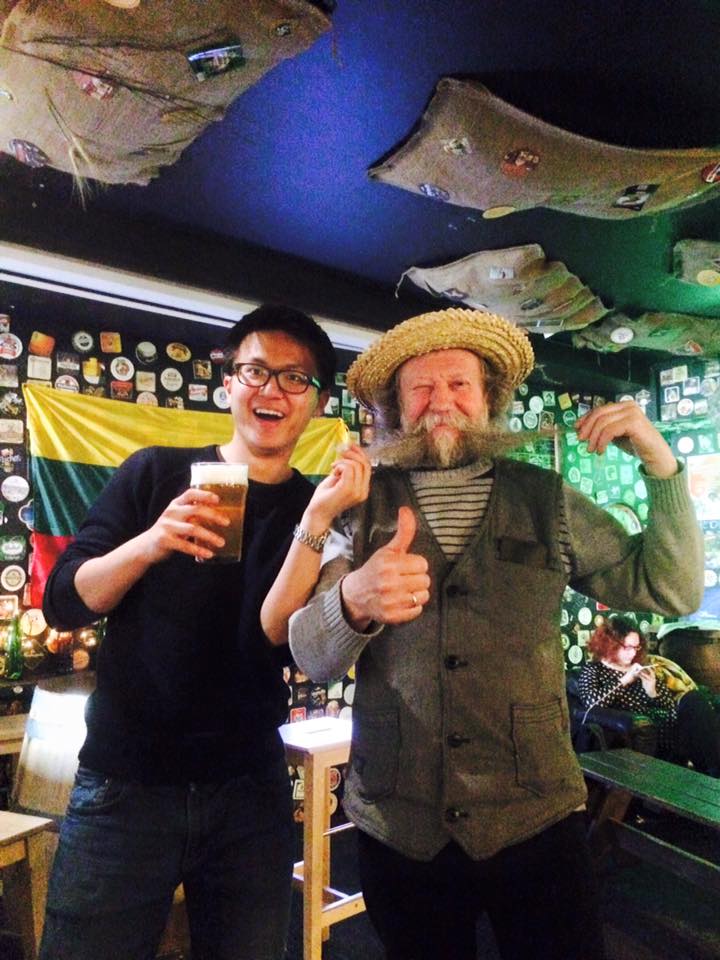 That’s him enjoying his beer with a bearded guy at a local bar in Alaus barai “Šnekutis”, Lithuania.

But how did you cope with the language barriers?

Well, people in the Balkans speak pretty good English actually, especially Croatia. Though there were situations where I did need to speak in other languages. Usually, I would learn from locals to say some basic words.

Hostel owners, who are fluent English speaker, would teach me a few basic phrases. I did use some basic Croatian phrases in a bar, like “hello” (dobar-dan), “thank you” (hvala).

Another thing: how do your Asian parents feel about your backpacking life?

They freaked out at first. They told me “it’s really dangerous” and “I shouldn’t go anywhere” because of the terrorist attacks. However, I find it to be the total opposite of what they say. I think it is the fear of the unknown that discourages people from traveling. 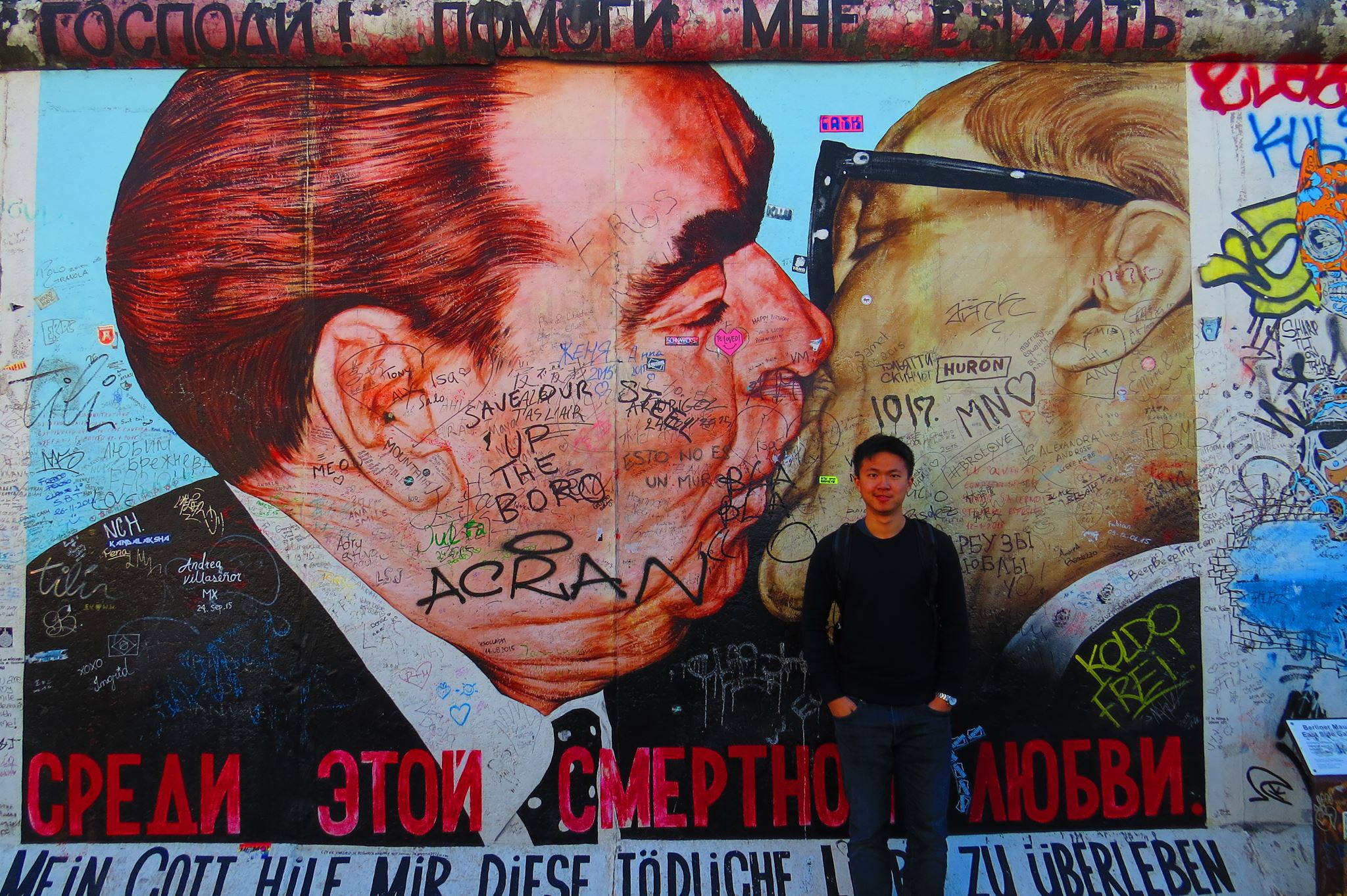 Andrew was in the East side gallery in Berlin.

To be honest, what is the ultimate key to traveling alone?

You have to be very open-minded. I see myself as a bold and outgoing person. I make friends with locals and other travelers, in the meanwhile, I get to know about the place that I’m traveling such as which restaurant, bar, and spots to go.

One of the most important thing about traveling: interacting with the locals. You will only know more about the country if you start a conversation with the person sitting beside you in a five hours bus ride. I love experiencing different cultures, meeting people from backgrounds and being immersed in such diversity.

Cliché: Do you feel like you are a different person after eight months of traveling around Europe?

Yes, of course, the way I look things is way different from when I was both in Hong Kong and Taiwan. Before coming to Europe, I did not actually have the motivation to travel at all before because I felt like it’s too much of a fuss.

Yet after staying here for almost 10 months, I decide to take a gap year, serve in the military in Taiwan and do an internship. And most importantly, I would travel around Asia.