This year’s offering, ‘Awakening’, did not disappoint

It has to be said, this point in the term isn’t always the most fun. Summative season is in full swing, diss deadlines are on the horizon, and most of us don’t even have a full timetable to keep us sane anymore because of the strikes.

Fashion shows are perhaps the only reprieve amidst all this chaos. Earlier this term, DUCFS raised a storming £171,000 for their chosen charities, and now, each of the colleges is bringing their own glamorous contribution.

Sunday 1st March saw St Aidan’s College stage their annual offering, raising funds for DASH. A locally based charity, Durham Action on Single Housing provides both supported and unsupported housing to people who are homeless, or on the verge of becoming homeless.

This year’s show was centred around the theme of “Awakening”, which fitted very nicely with its fundraising aims. On the theme, Chair, Iona Fleming told the Tab Durham: “Our theme, “Awakening” focuses on raising awareness and “waking up” to the impact that the university, and us as students are having on the local area”.

The SACFS Exec also advised us that, as part of their aim to make the charity a more central aspect to proceedings overall, the models and members of the Exec were invited to become much more closely involved with DASH than in previous years. They were each invited to spend an afternoon volunteering with the charity, asked to individually fundraise £50, and also attend a talk on DASH, and the work it accomplishes. 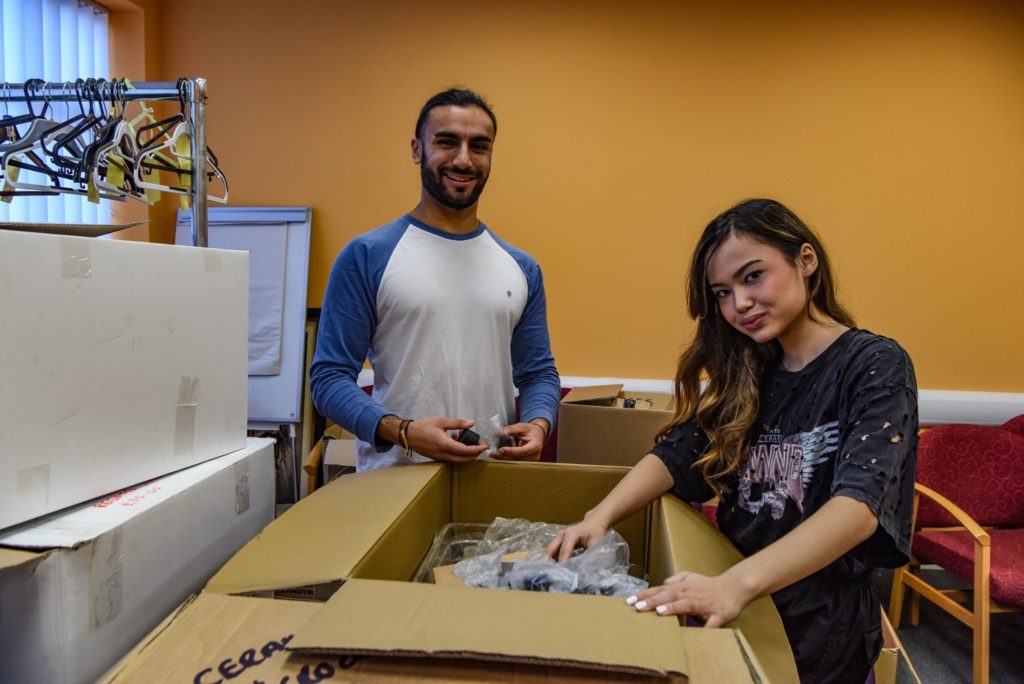 The SACFS team volunteering with DASH. Image obtained via the SACFS Facebook page

The show itself was a brilliant spectacle from start to finish. The three compères, Josh Geare, Harry Pawlak and Kasia Procter kept the energy suitably up throughout, and did a great job of controlling what became an increasingly rowdy and excitable crowd.

From the offset, it was clear that the quality and overall aesthetic impact of the clothing brands on offer was stronger than might be typically expected from a college fashion show- and at times was more in keeping with that of the DU show. At times, it was a little difficult to see how certain looks fitted in with the theme of “Awakening”, but this was more than made up for by an ongoing emphasis on sustainability which nicely held all the walks together.

It was clear that many of the designers for the show had been selected with the aim of supporting local designers and small businesses from the North East. A number of designers were Northumbria University Graduates, with special note going to Paige Storton’s “It’s all in the Jeanes” sportswear range. Its aim was to explore the stigma of male mental health through fashion. Another Northumbria based designer, Katie Unsworth ought to be credited for her designs featuring bold warm colours and laser cut detailing. Her range seeks to raise awareness of the dangers of commercial fishing for sea life. The Exec members responsible for sourcing such ethically conscious brands definitely deserve deep praise. 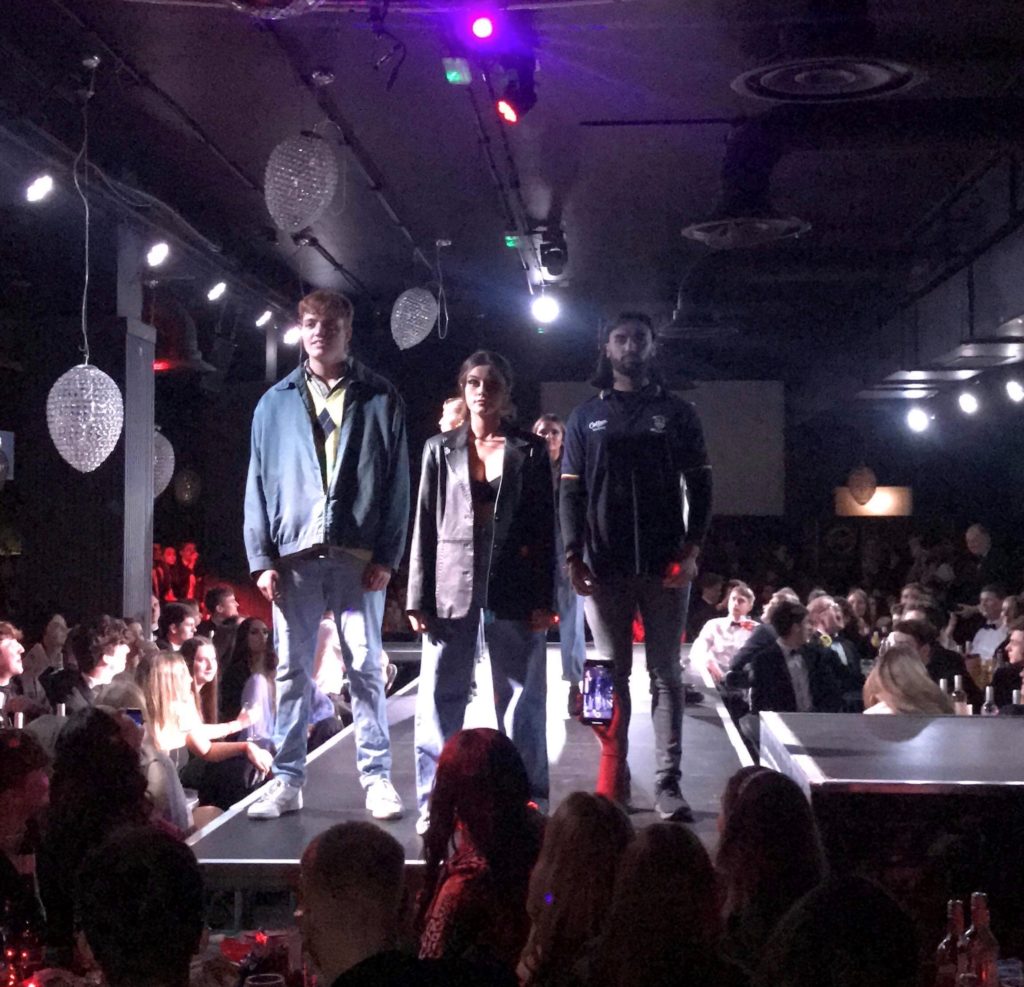 Even the swimwear walk served as a sustainability project: Skya Swim, one of the brands featured, uses a combination of discarded fishing nets and recycled consumer waste to make their products. That fishing nets could be repurposed into swimwear was a concept I hadn’t ever heard of before, but it was inspiring to see that recycled materials can actually be transformed into something that’s attractive and actively wearable.

For me, however, the overriding presence on stage was established not by the clothing, but the warmth of the models themselves. Everyone looked like they were really enjoying themselves, and the subtle encouragement exchanged on stage between them made everyone seem much more at ease.

One entire walk was put together using items sourced from local charity shops, which was a particular favourite of mine. Whilst a common criticism of these shows is that the looks they flaunt perhaps aren’t suitable for everyday wear, this walk was refreshing in showing just how elegantly second-hand can be repurposed: whether for the lecture theatre, or indeed even here, the catwalk. That these were all purchased by both the Exec and models themselves was a really nice personal touch, giving us a subtle insight into each’s own style off-stage. 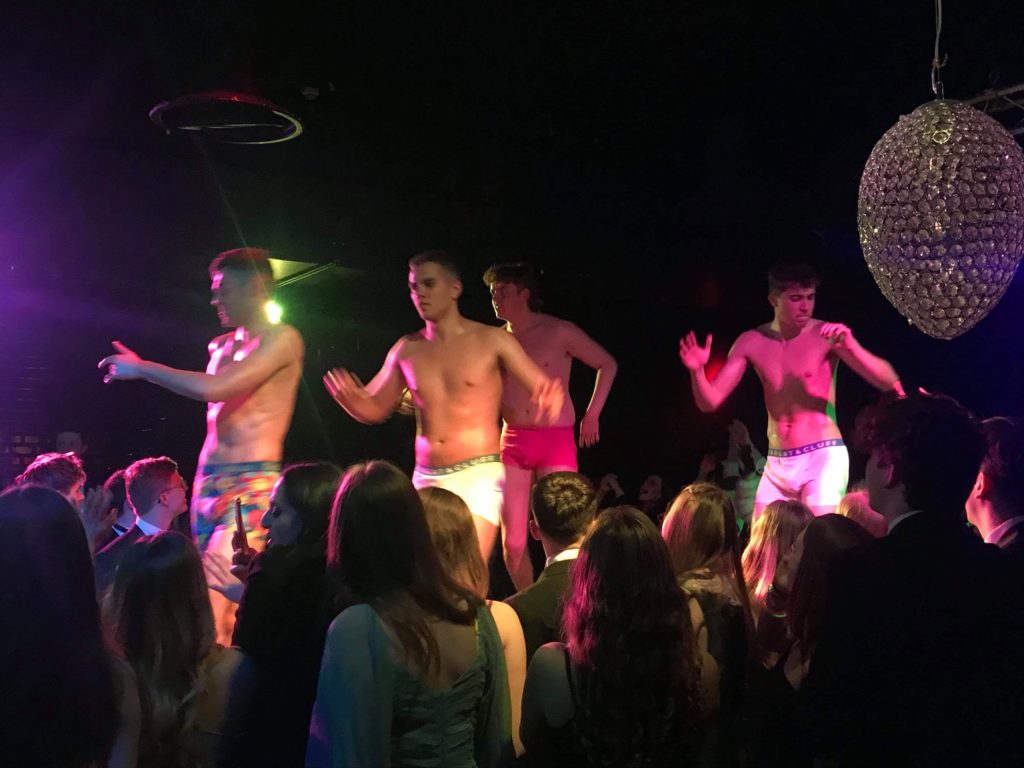 Of course, no show would be complete without a little self-indulgence in the form of an underwear walk. With everyone tanned and oiled up to the nines, it was a great closing walk to conclude what was a brilliant night. What was particularly noteworthy was that even within this walk, consideration had clearly been given as to the specifics of the designer collaborations made. Teaming up with Oddballs was a solid move- a brand known for its bright and bold prints, and whose proceeds go straight to their charity, the Oddballs Foundation, raising awareness of testicular cancer.

Even aside from the walks, the entertainment was strong at maintaining the audience’s interest throughout. From a gripping pole performance, to a raffle and an auction which alone managed to raise £900, there was never a dull moment.

The choice of Players as a venue was also a welcome one- doubly serving as the afterparty venue along with The Butterfly Rooms. One slight issue was that the setup of the venue meant that some tables were positioned behind pillars, obstructing full view of the catwalk at times. This wasn’t an issue that affected us personally, and is more of an unavoidable pernickety issue with Players than a shortfall of the students organising the event. 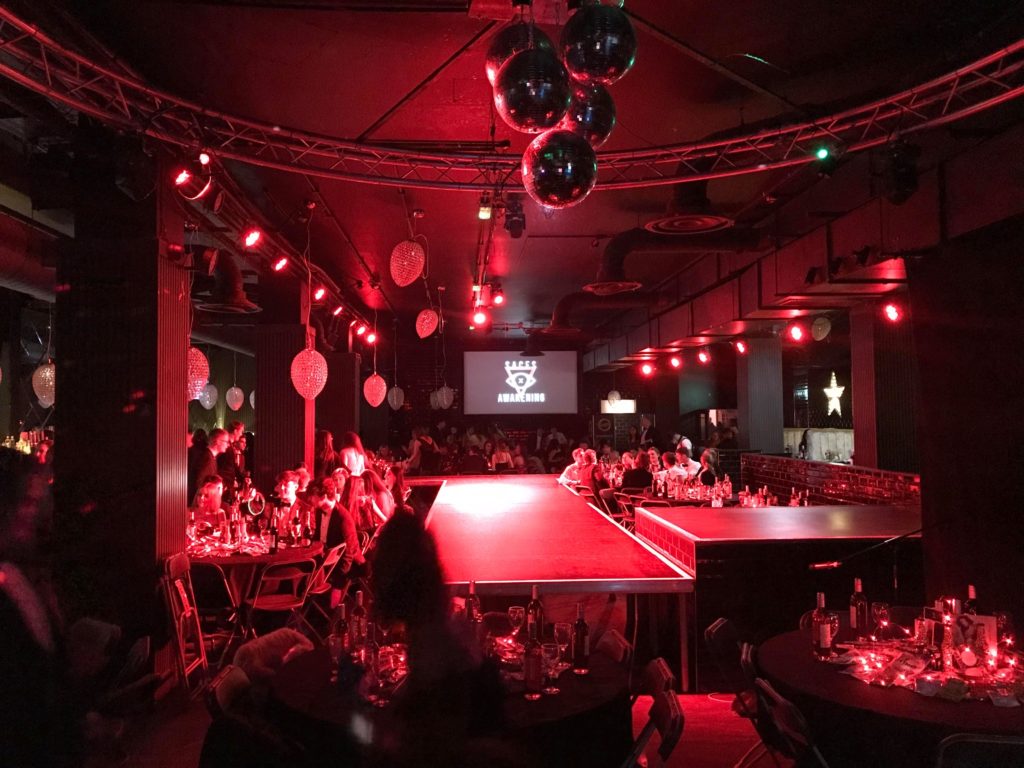 Overall, the show was co-ordinated brilliantly. The designers each brought their own artistic concepts, yet somehow complemented each other in a way which meant that there was a seamlessness flowing from one walk to the next. The calibre of the artistic flair on display was incredibly strong for a college show, but successfully escaped the pretentiousness and inaccessibility fashion shows are often accused of through the combined enthusiasm and professionalism of its diverse range of models. 10/10 would return next year.

Additional donations can be made to DASH via its JustGiving page here.