Cardiff SU is set to become a living wage employer

The motion has taken a few attempts

The motion was put forward by Leo Holmes, the President of the Labour Students society. He argued that Cardiff University Students’ Union should become a living wage employer, paying staff a £9.30 living wage in order to improve work-life balance.

He claimed that some staff currently work double and triple shifts to make ends meet. Additional reasons given for the motion include improving staff morale, and freeing up available working hours for other potential student staff members.

WE DID IT! The #LivingWage motion has PASSED! A huge thank you to the 301 of you that voted for the motion! #CardiffAGM19 pic.twitter.com/XmppxcecVR

A current team leader in Cardiff University venues spoke against the motion, stating that it would mean a reduction in funds for club nights, the food court and The Taf.

She also argued that the current wage of £8.21 was fair and adequate, whilst pointing out that the SU paid more than any other venue in the whole of Cardiff. Alongside this, she said there is a high level of student staff satisfaction at the SU. 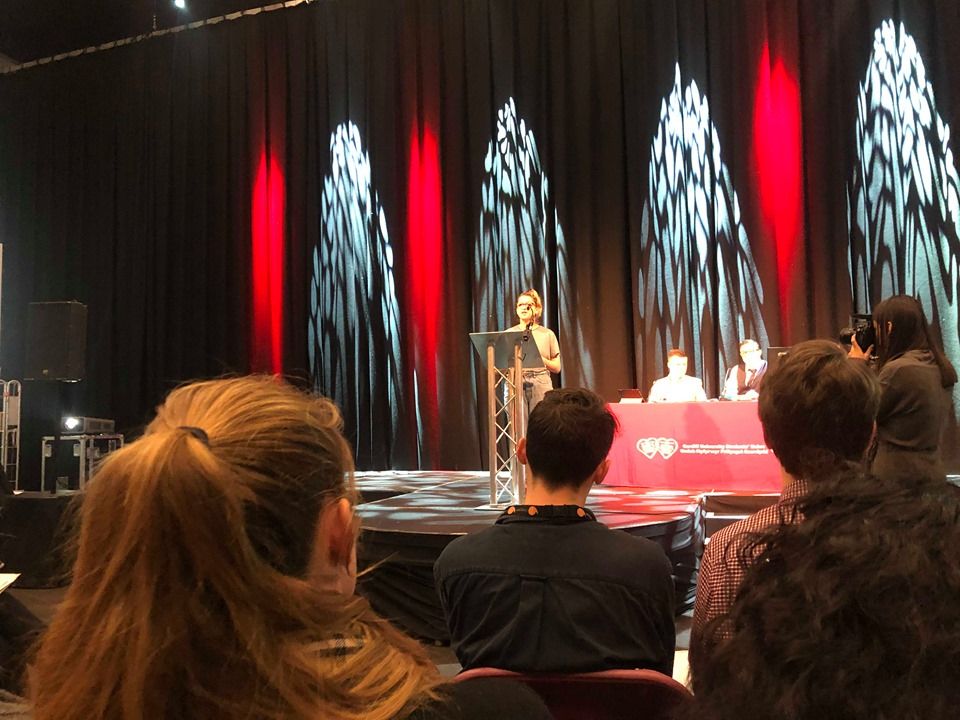 An SU staff member speaking against the motion

Another speaker for the motion drew attention to the fact that in 2013, the student senate voted for the Students' Union to become a living wage employer. However, they said this motion was subsequently ignored by the 2015 President of the Students’ Union, who argued students have a low cost of living.

When put to a vote, it was so close that things had to be taken to an official count, as opposed to a show of hands. In the end, the results showed 301 for the motion, 280 against and 74 choosing to abstain, meaning that the motion passed.

Jo Stevens, the Labour parliamentary candidate for Cardiff Central tweeted that she was thrilled Cardiff students have mandated the union to become a living wage employer.

She referred to the 'several attempts' made at passing the motion, as it was previously proposed to AGM in 2017 and 2018 but was voted down.

At previous AGM's, many people spoke against the motion including sabbatical officers. In 2018, the VP Societies Henri Page argued that the motion would increase costs in the SU, harm mental health services and that some staff would lose their jobs.

This year, it was argued that an available surplus in SU funding, and the fact the motion will be implemented over a three year period, made it more financially viable.

There was also an encouragement for students to register to vote before the fast approaching deadline.