Get voting Cardiff! The Doctor’s message for uni students

Cardiff Uni’s 2014’s elections have begun! The nominees are campaigning hard for your votes. So who will it be?

Cardiff’s student elections are underway and Doctor Who star Peter Capaldi has even been roped in to convince students to get voting.

The Doctor is currently in town filming scenes for the next series of the show, and some opportunistic students jumped at the chance to shoot a quick campaign video with him.

Beyond the TARDIS, since Friday we’ve all seen a massive surge of fancy dress and free cakes around campus as candidates vie for your attention.

Hopefully, all of you have read the manifestos for the new committee nominees. If not, here are some of our favourite off-the-wall campaigns for you to enjoy. Make a wise decision ya’ll! 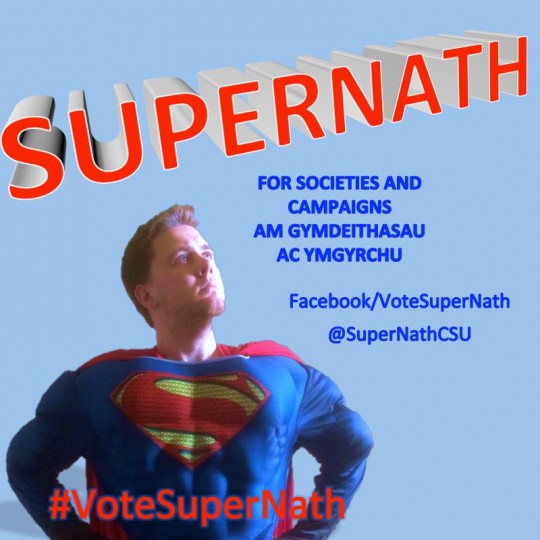 ”I know how societies are run and I am passionate about students getting the most out of the union! I can make them super!”

I hope to restore them and make them better for students to further their education and help make contacts within the industry in order to improve employability.

There are 170+ societies and less than ¼ take advantage of them. I really want them to open up and be more inclusive!”

Another eye-catching campaign is Alex White’s (a.k.a. the Ginger Ninja), who is running for VP Education. Here’s a sneak preview of the ginge’s tricks to making our Cardiff University experience more worthwhile…

Bryn Griffiths aka The Bryncredible Hulk is campaigning hard to become the new AU President. 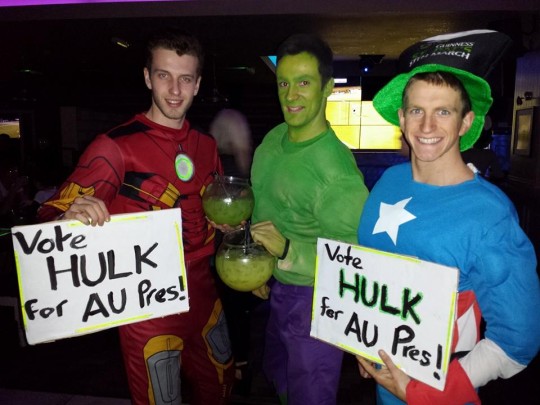 Bryncredible Hulk and his posse enjoying the Hulk fishbowl at Varsity.

”As the president of DanceSport, I have gained invaluable experience. Along with the committee, we made some crucial changes that proved fruitful as they pushed the club into the top 4 in the UK as well as substantially increasing the memberships.”

“The most important change I want to bring about is lobbying the university to build brand new multipurpose sports facilities. It’s big and probably controversial, but it’s not an empty promise!”

“With the 3G pitch at Llanrumney due for completion by September 2014, it’s the apt time to push for the next project, which will help us bring up to speed with the current BUCS top 10 universities whose facilities put ours to shame.”

”I come from an incredibly diverse sporting background, enabling me to represent all our clubs effectively. I will work just as hard for the biggest and the smallest, the oldest and the newest clubs to ensure every area of your sporting experience at Cardiff is pushed to the next level.”

The current VP Education has created an awesome ‘Where’s Ollie’ campaign for his presidential campaign. He’s back in stripes fellow students, so get voting! 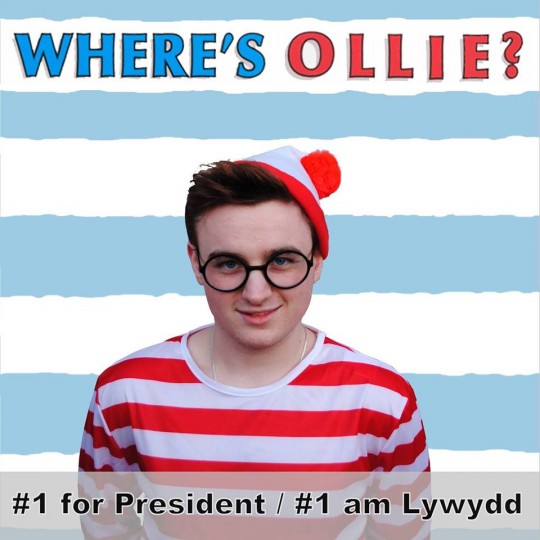 Who gets your vote? The elections close on Friday 21st March at 5pm, so hurry and make your vote count.