Ellie has been making her rounds, focusing on a UK tour at the moment- but how did she do in Cardiff?

Ellie Goulding has been causing quite a stir over the past few months, with her hits including ‘I need your love’ with Calvin Harris and her no.1 single ‘Burn’, you could tell the audience were excited and anxious for her to come on stage at Cardiff University Student’s Union. 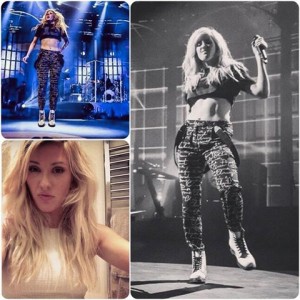 Ellie was amazing- to be frank. She played a great arrangement of songs including an acoustic version of ‘Guns and Horses’ where she played the guitar smoothly and with talent and her voice is pitch perfect, sounding as if straight from a record.

Her personality comes out on stage, although she seems shy and tentative her banter with the audience is good.

She replies to a guy shouting, “Marry me?!” with a laugh, shrug and “ok, sure!” She also made sure that the few guys (mainly dragged along boyfriends) had a good time, saying to the crowd often that she was going to make sure the guys put their hands up and danced.

Yet she made the crowd fight for her hit song ‘Burn’, supposedly ending her set without singing it and making the crowd scream and chant for her to come back.

She duly delivered and ended the set by playing ‘You, My Everything’ and ‘Burn’ to an audience that sang along to every word and jumped to every beat.

Overall, an amazing set and hopefully Ellie will come back to Cardiff to get us creating ‘twinkle stars’ with our hands again!