The proportion of black students in Cambridge is on the rise, but there is still more to be done

While access is often thought of as a financial problem, it is also a racial one. In recent years Cambridge has begun to admit a more representative proportion of pupils from Afro-Caribbean backgrounds, with the current first-year undergraduate cohort consisting of 91 students. This means 3.4 per cent of students are now of this ethnic group, getting closer to the 4.5 per cent proportion at A-level.

The Tab spoke to Naomi Kellman, the programme’s founder, to discuss her work, her understanding of the access problem for black students and her vision for the programme in a COVID stricken era.

The scheme was started in 2012 and has seen a successful rise in the number of their candidates receiving offers. (photo credit: Target Oxbridge)

So, crucially, why are black students still disadvantaged in the application process? “There are multiple things going on, and they start further back in the educational journey of the student. In terms of the education system as a whole, there is well-documented evidence that black students are the victims of lower expectations from educators, and research shows that they are often under-predicted. I’ve worked with students over the years that had a hard time at school because the feedback they were getting from teachers didn’t line up with their academic self-concept and then they sat some exams and did much better than expected. They come to us in Year 12 having had a very abrupt confirmation of what they always believed; that they were very capable.” Being in top sets, receiving extension work and extra attention often helps the best and brightest on their journey to a top university. If an ethnic group is systematically not afforded the chance to do so, they face an inherent disadvantage.

It is not just their educational background itself; the application process is inherently harder. “Part of the interview is having the confidence to discuss questions to which there is not an obvious answer, and the reason why we have our summer development program is to give the students the chance to discuss their subject at a more challenging level. Not all schools can provide an environment where lots of discussions occur in class, it wasn’t something my school had a lot of, so I wasn’t as confident thinking aloud as other people might have been.” Summer programmes also offer students the chance to meet, which gives rise to even more academic enrichment for them. “While they can speak to us from the Target Oxbridge team and we give them a mentor, they can speak to each other and students have told me that after being on the program they made friends that they shared interests with and were able to discuss academic ideas and share resources with. For some students, they are the only person at their school hoping to go to Oxbridge, and they might be the only person interested in their subject, so they have no one to talk to about it.”

A massive part of the program has been about showing students that people like them are present in Cambridge life. “Aspiration isn’t the problem; it’s access to the advice that other people had and access to the role models who make aspirations realistic. The number of applications we get every year shows there isn’t an aspirational problem; lots want to go to Oxford and Cambridge.” Target Oxbridge received over 1000 applications in their most recent cohort, and only 160 places are currently available. Black students who apply clearly have just as much drive and ambition to pursue academic excellence as anyone else. Target Oxbridge prioritises bringing current students to the conversation to help prospective students feel their dreams are attainable, and this works well with the new work the university is doing. “Cambridge has a Black Access Working Group, which includes representatives from the Cambridge ACS. That’s really important because my frustration when I started this was that people often spoke about black students but very rarely spoke to them, and I see that’s improving.” Kellman feels that the best way to set access policy is to have an inclusive conversation that draws on black students’ experiences.

Target Oxbridge’s work is making good inroads, and in the last cohort, 71 of their students received offers, which the team are exceptionally pleased about. Given the programme’s success, do they have ambitions to expand and start working with younger students to give them a boost even earlier on? “I’d love to be able to do some schools based work with Year 9s, Year 10s and Year 11s. However, I’m keen that anything we do, we do well, and that is a different type of work. It is a question of resources.” The scheme must remain free to students, and so Kellman hopes, in the future, that as more funding comes in from universities and other organisations, they will be able to move into these areas. 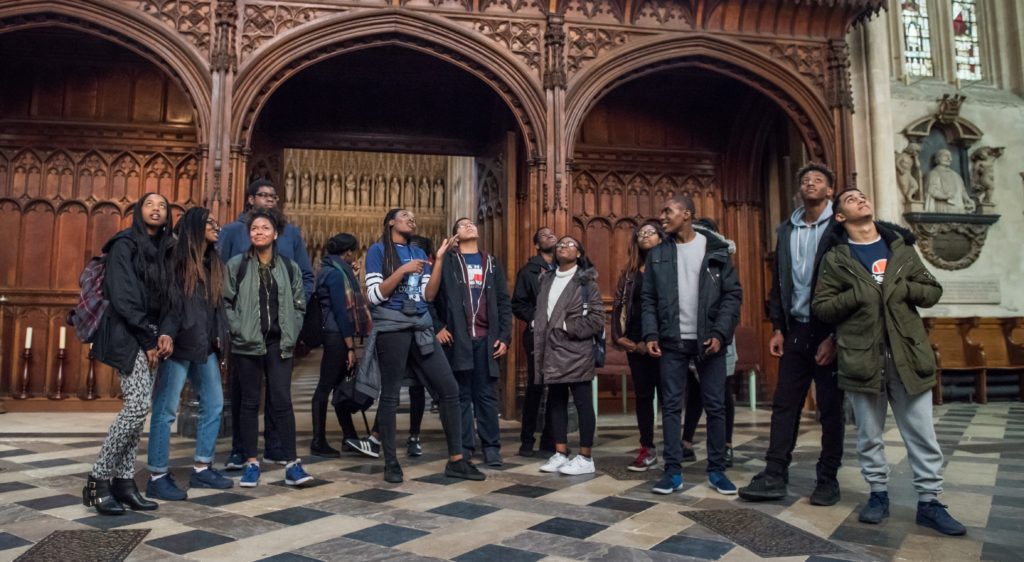 In the meantime, however, they have found other ways to spread their work and help more than just their cohort of 160. “In the past few months we’ve had to move the program online because of COVID, and while it’s a shame in a sense that students missed out on the face to face interaction, we’ve been surprised by how much we are able to do online, with video conferencing and webinars. It has given me food for thought in terms of what online options could do for us in the future.” One aspect of this is their podcast which is available on Apple and Spotify and has a wealth of information for students, teachers and parents who they often receive questions from but don’t have the time to visit and help. “I was often giving very similar advice and linking to similar resources, so we put it out on a podcast series where I give tips and interview a Target Oxbridge student. It has had a very good reception and has been shared widely. We will be thinking more about the power of that podcast and how we can share advice to a much broader audience.”

The access gap does not just stop when black students reach university. Universities UK and the National Union of Students found a 13% gap between the chances of white and BAME students across the country getting a first or upper second degree. Kellman’s interactions with current students give her the impression things have improved since her time at Oxford, but more should be done. “The discourse on campus did not really exist when I was at university. Our challenges were different, we were much smaller in number, and we were just getting by. Now students are able to have discussions and push for what they want to see, such as the ACS with their access work. There is still a strong sense from students I’ve spoken to there now that there is more to be done in ensuring all students have the sense of belonging they need to go on and attain, as well as a diversity of teaching staff. The data does show there is an attainment gap, but the universities do seem to be monitoring that more closely now, which is good because you can’t figure out how to fix a problem if you don’t monitor it.” We also discussed the access gap for postgraduates (something Target Oxbridge again is interested in but doesn’t have the capacity for right now), and Kellman pointed out that this feeds into a lack of diversity in staff and teaching. If few black students go onto PhDs and post-doctorates, then this is reflected in our lecturers and supervisors. A few months ago The Tab wrote about the steps the university were taking to fix this, with some schemes being somewhat less successful than others.

To end our interview, I’m interested to know what the teams end goal is, given that recent statistics show we are moving towards a closing of the undergraduate gap. “With this sort of work in an ideal world, you work yourself out of a job. Ultimately you want to solve the problem. We’ve always wanted representation at top universities to be in line with representation at A-Level, so if we get to the point where that is true, then we will have achieved our goal.” However, this will not be the end for the Target Oxbridge scheme, as even now they see what next steps would benefit black prospective students further. “More broadly, I think there are some differences between representation and attainment within black students and sometimes from a gender perspective as well. Our programme is predominantly made up of girls and African students, and some of that is demographic, but some of it is to do with gaps between attainment and representation. So if we do hit that representation level, we’d want to drill down and say ‘What does representation look like for black boys and Caribbean students?’”

Target Oxbridge is currently looking to sign up new mentors, from any ethnic background, especially in the following subjects: Medicine, Law, Economics, Computer Science, Geography, Mathematics, Land Economy and PBS. For further information on the programme and to apply to be a mentor visit the Target Oxbridge website.

Having been approached for comment, the university have said they agree with what Naomi has said and “We look forward to continuing to work with Target Oxbridge and building on progress already made”.