It's been a hard day at uni, you miss your horse and your private-school education is not helping with your recent streak of 2:2 grades. Instead of crying about it, you don your new Barbour jacket and head to the SU for some bevs with your mates. But before you leave, remember to draw on whiskers and put on your orange cat ears, because you're off to the fox hunting social ran by York Uni's Conservative Society.

That's right, student Tories have been at it once again this week, with Conservatives at Uni of York announcing they would be going ahead with a social where they dress up as foxes and hunters, despite criticism from just about everyone, including the very Tory party they support. 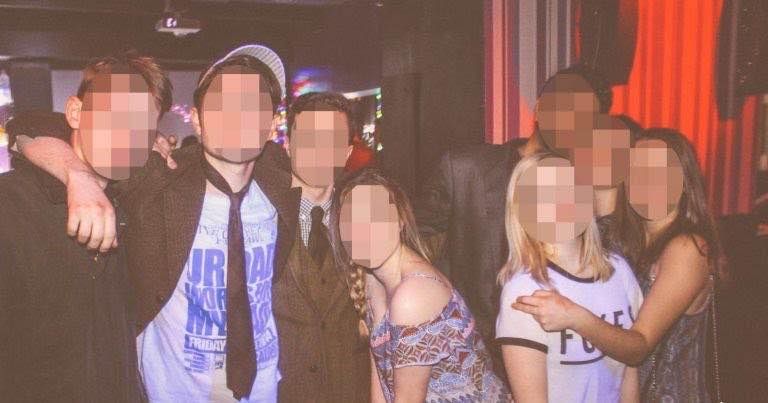 Young Tories at unis across the country have a history of doing this sort of thing, so we thought we'd give a brief history of all the times they royally fucked up in recent years:

The Tory society at UCL were ordered to apologise by UCLU for allegations of racism within its membership. There were reports that someone said: "Jews own everything, we all know it’s true. I wish I was Jewish, but my nose isn’t long enough." They also allegedly made jokes about cake being "haram".

The society eventually apologised after a three month investigation by UCLU. Is it really a surprise to anyone that the oldest Tory society of any university in the country were this racist? Big yikes.

Before York's fox hunting social came the badger culling social; what is it with their obsession with pretending to hunt? Despite its controversy, the social apparently went off without a hitch, which is surprising considering this was the picture on the event's advert:

Nottingham's Tory soc had a "port and policy" social, where they pretend to be debating in Parliament and drink lots of port. It clearly all went to their heads, as members were overheard to be saying things like "feminism is the worst thing in society" and calling a bus a "pleb-wagon". Does a drunk mouth speak sober thoughts?

April 2016: Exeter Tories weren't invited to David Cameron's speech at their own uni

Before the EU referendum, David Cameron visited Exeter Uni to make a speech about it, but it was outside of term time, leaving Exeter's young Tories feeling snubbed.

There was a theory that David did this to avoid the Feminist or Socialist societies possibly disrupting his talk, but imagine your own party leader not even wanting to engage with you.

During the Manchester Uni Freshers' Fair, two girls who called themselves "revolutionary socialists" ripped the head off a Margaret Thatcher carboard cut-out. They tried to run off with it but a Tory soc member grabbed them, which is when one of the girls said: "Get the fuck off me you Tory scum" before taking Maggie's face with her. Talk about a couple of sheroes. 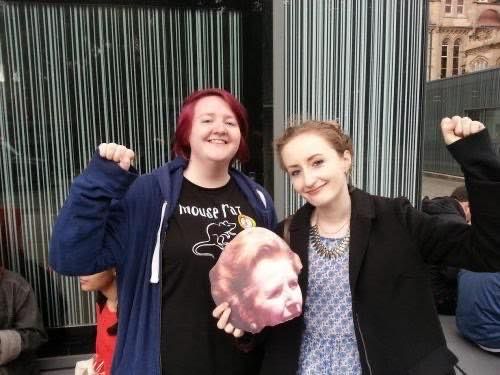 February 2017: A Cambridge student burnt money in front of a homeless person

The Tab was sent a video of Cambridge student Ronald Coyne trying to burn a £20 note in front of a homeless person, while shouting "some homeless shelter" at them.

Ronald was a prominent member of the Cambridge University Conservative Association who said: "There is no room for people who behave like that in our Association" and revoked his membership.

The homeless person said Ronald "took out a £20 note… Then he pulled it back, lit it, burnt it, and said: ‘How’s that for change? I’ve changed it into flames.’ I was absolutely disgusted."

Ronald's mum even publicly roasted him: "I don’t really know why he’s done something so thoughtless and cruel. It’s completely out of character."

November 2017: Young Tory politicians made jokes about rape in a closed Facebook group

As part of a Facebook group called "Young Liberal Society" several young people who worked in politics were found to endorse comments such as "sexual harassment doesn't exist, it's called gentlemanly flattery." Uday Maudgil, who worked as a House of Lords researcher at the time, supported this comment, which he says was "a stupid mistake which I deeply regret."

December 2017: A student Tory said it was harder to come out as a Tory than gay

A student in Kent said on the radio that a third of his fellow society members were gay and found it harder to tell people they were Tories than to come out as gay. Imagine being straight and comparing political disagreements and being told to fuck off sometimes to being kicked out, beat up or murdered for who you are or love. This was not it.

February 2018: Notts Tories made a sponsorship deal with an all-male Freemason's lodge

2018 is where things start to really kick off. All the student Tory societies seemed to be in competition to see who could be the most out-of-touch, like some sort of Hunger Games race to the bottom.

Nottingham University's Conservative Association was sponsored by a male-only Freemason's lodge in an effort to enlist students, being called a "scheme to introduce anyone, male or female… to Freemasonry." However, the notorious reluctance of this lodge to admit women, and the failure of NUCA to recognise this, was a bit of a smack in the face to female Tories studying in Notts.

Society Chair Laurence Smith's re-election in 2018 was controversial: his election speech was allowed to run longer than other candidates, voters were not informed of the proxy voting system, and there were allegations of voter intimidation in his favour.

Formal complaints were made by members of this Tory soc, and the Returning Officer had to formally apologise. Tut tut, Sheffield.

October 2018: Tories in Bristol auctioned a hat signed by Jacob Rees-Mogg for £70

Bristol's young Tories didn't have any scandals, as such, but they did prove just how wet they can be. In an effort to raise funds for themselves, they auctioned off a hat that was signed by Jacob Rees-Mogg. Fair enough, right? 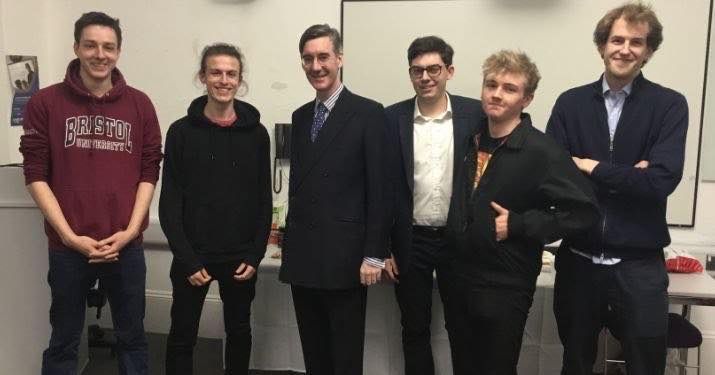 What if we told you the reason they needed to raise money was because they sent £500 on security for Jacob to visit Bristol's Tory society in the first place? Talk about shooting yourself in the foot.

December 2018: Young Tories in Liverpool got upset because people didn't want to sleep with them

A girl tweeted UoL's Young Tories asking for a list of members' names to know "who I can't shag." The society reposted the tweet, tagging the uni's Call It Out campaign to tackle sexual harassment on campus, which was seen by some as "ridiculous". The person who made the original tweet deleted it, but told The Liverpool Tab: "I would still love that list, I've never fucked a Tory, and I won't ever."

Since the tweet has been deleted, thought I’d just publish this to show how we are treated over social media. #CallitOut @LiverpoolGuild @LivUni pic.twitter.com/2ix67MtQux

November 2019: Tory candidates and students during the General Election campaign

The Conservatives might have won a landslide majority in the 2019 General Election, but that doesn't mean that student Tories didn't make total fools of themselves along the way.

In fact, 27-year-old Ryan Houghton stood as the Tory candidate for MP in Aberdeen North, but was eventually suspended for his forum posts from 2012. 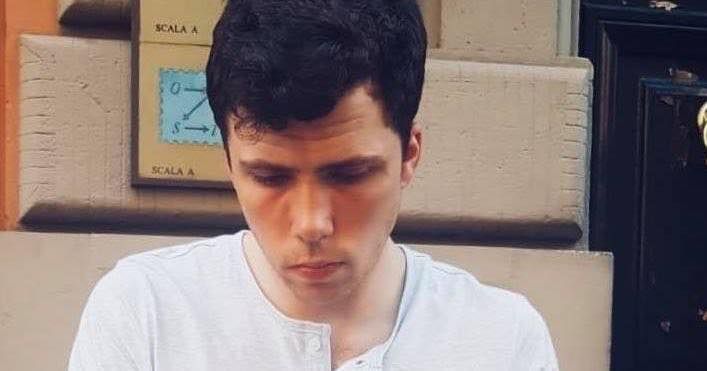 From praising a Hitler apologist, to believing aspects of the holocaust were fabricated, to questioning if homosexuality is "good" for the human race – you can see why he easily lost support from the Tories for his candidacy.

Down in Liverpool, the former President of UoL Young Tories got into some trouble with locals. After arguing with a left-wing house after they told her they didn't want to live with her, Olivia Lever gave an interview to a journalist from The Sun, you know, that newspaper that is categorically shunned in Liverpool because of its coverage of Hillsborough?

Viewed a room in a student house today, and saw this poster before I walked in. The house was a potential option even though there was ‘brexshit’ stickers and a poster of Che Guevara.

2 hours later receive this from one of the girls that lives there. Tolerant left strike again. pic.twitter.com/788cKCVSkc

The icing on the cake for Olivia's reputation was when she posted a picture of herself with Margaret Thatcher on the day of a Hillsborough court verdict. It's suffice to say that the largely labour-voting, Tory-hating locals and students alike were not very happy with her. Here's to a quieter 2020 for Olivia?

I take back my previous tweet and replace it with this one:

You cried when you came to Liverpool and found out Tories weren't welcome, and now you've posed with a picture of that monster on the day there's a Hillsborough court verdict.

Get out of my city you fucking arsehole. https://t.co/KtHlMk7WZg

November also saw the "Brexit girl" from King's, Emily Hewertson, constantly putting her two cents (or should we say pence) in about Jeremy Corbyn, and how his young supporters only liked him because he "offers loads of free stuff." It's safe to say she is not popular on Twitter.

Why this 19-year-old Conservative is voting for Boris and not Corbyn. @emilyhewertson #GE2019 #CostOfCorbyn pic.twitter.com/T8vDS0i05z

The end of the decade saw no rest from young Tories being controversial. In the midst of the General Election, a gay, Tory student from Sussex brought back the debate about how he thought in parts of the UK it's "harder to come out as Tory than gay." 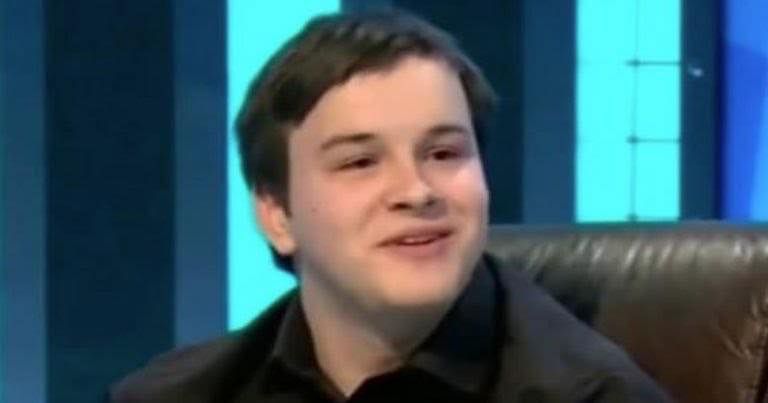 Just because you're gay yourself does not make you right

Then, as the election loomed, the head of UoB's Conservative Society, Michael Curzon, urged Tories not to vote. He dragged BoJo and Conservative party policies for not being "conservative" enough, and even said: "Everyone in the society knows I don’t support the [Tory] party." Perhaps you need a career change, Michael.

2020: York's hunting social and The Hunger Games of Tory Twitter

This brings us to a new year and a new decade of young Tories making headlines for fucking up. Right now, it's the York Conservatives carrying the torch, with their second annual fox hunting social still set to go ahead.

Going to go dressed as a fox to the York Tory fox hunting social. #WhatDoesTheTorySay

Nouse reported that they're holding the event in the honour of recently deceased York Tory President Roger Scruton, who was "a great lover of legal fox hunting." That didn't stop the actual York Conservative party condemning the social, though, as they said: "This does not represent our young Conservatives movement."

It comes as no surprise that with all of these tragic events and shit takes, young Tories can really be the punching bag of Twitter sometimes. This isn't likely to change anytime soon, as Glasgow student James Yucel has set up a Hunger Games-style tournament for the Tories of Twitter.

The Tory Twitter Hunger Games will take place on 6-9 February 2020.

24 notorious Twitter Tories will be chosen to represent their faction and fight it out in this year's arena.#TTHG #LetTheGamesBegin

It's set to take place from the 6th-9th of February, and features people from Brexit girl Emily Hewertson to the notorious Piers Morgan. No one will actually be killed, of course.

Who will come out on top? We don't really know, but what we do know is that as long as young Tories are around there'll always be a fuck-up to report on.

• What it’s like to actually date a young Tory, by people who’ve done it

• It’s actually really easy to be a Tory at uni: Just don’t be a twat

One of them was in a pantomime!!