“Revolutionary socialists” cut of the head of a cardboard cut out from the Manchester Conservative Future stall.

The stall, situated in Academy one during the University of Manchester Freshers’ Fair, was apparently very popular, with people posing for selfies with the life size image of the late Prime Minister.

However, Lauren McCourt and Freya Blake, who called themselves “revolutionary socialists”, were seen approaching the stall and grabbing the cut-out, running off with it.

Blake said: “We actually thought it was quite disgusting that it should be allowed in an educational institution. For everyone I know and am affiliated with she is a symbol for austerity. It’s outrageous that they should be allowed to parade her around when she ruined this country for poor people.

“It’s awful that these quite obviously privately educated people should be allowed to stand there next to her and try and indoctrinate people with their ideology. As revolutionary socialists we are fighting for the rights of the world’s most marginalised and disenfranchised.

“We thought it was an ethical choice. We grabbed her and ran. This Tory grabbed me really hard and screamed in my face, ‘what the fuck are you doing’. I turned around and screamed, ‘get the fuck off me you Tory scum’. Then Lauren ripped off the head of Thatcher, we stamped on it and ran”. 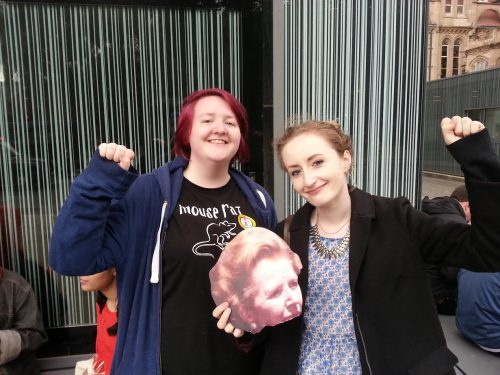 Luke Dyks, Chair of Manchester Conservative Future said: “As a society we try not to take ourselves too seriously and have a good time. We bought the cut-out to use as a bit of self parody, to allow any Conservative supporters or opponents and opportunity to have a laugh at our expense. And over the first day and a half it had had the desired effect. We had received no hostility other than a few sneers and funny looks. Even the Manchester Marxists on the table next to us had seen the funny side and posed for photos.

“As a group we are really dismayed that people would damage our property like this, not just for its monetary value but [we believe] that we have a right to free speech around campus. There was no need for this theft; everyone has a right to hold a set of beliefs, no matter how much you disagree with them.”

The Manchester Marxists, whose stall was next to that of Manchester Conservative Future wanted it to be known that the two girls are in no way affiliated with their society. They said, “Manchester Marxists do not condone the beheading of political opponents, cardboard or otherwise. Having said that the anger of workers and students against one of the most anti worker figures in living memory is very understandable.”

The ripped and headless cut-out was reportedly left at the Manchester Conservative Future’s stall. The head is yet to be returned.