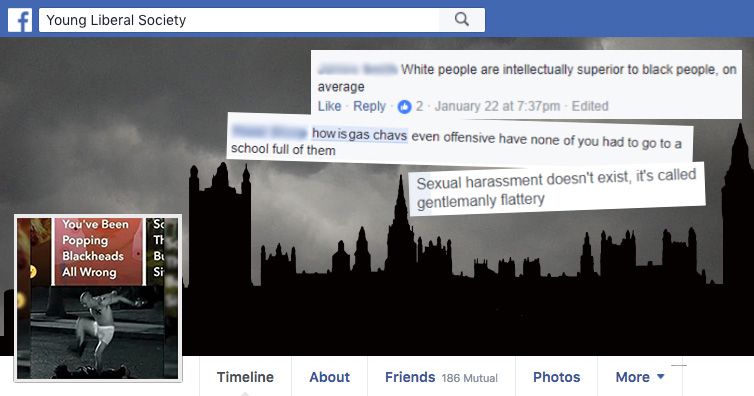 The comments were made in the “Young Liberal Society” Facebook group

Young British politicians have been making jokes about rape and sexual assault in a Facebook group, The Tab can exclusively reveal.

The comments have been made in a closed Facebook group called the “Young Liberal Society”, a free-speech group intended as a space for vigorous debate set up by Edinburgh Law student Robbie Travers.

Comments made by prominent young people working and active in politics include:

– I'd still bet SJWs have more sex than alt-righters, even when you account for all that wasted time filling out consent forms ?

Posts by other people in the group include a meme of a neo-Nazi stamping on a black person's head, with the joke “you've been popping black heads all wrong". 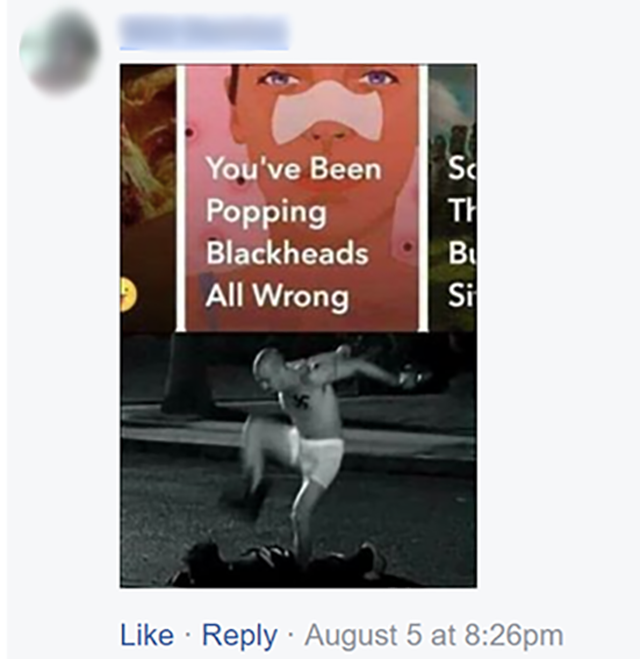 Another member posted how, unlike current politicians, Hitler put such heart and passion into what he was saying.

A Tab investigation has uncovered the names of those young politicians who have been making inappropriate posts in the group:

Uday Maudgil, has been a researcher in the House of Lords for two years, and endorsed “sexual harassment doesn't exist, it’s called gentlemanly flattery,” in a poll asking people to vote for how “politically edgy” they were. Uday is also listed as staff for the Conservative peer Lord Suri.

Uday told The Tab: “This is a stupid mistake which I deeply regret.” 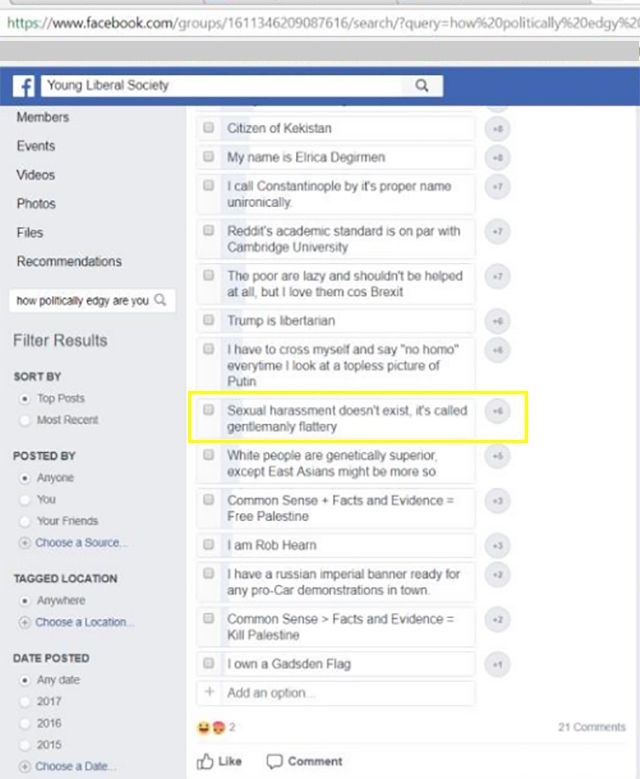 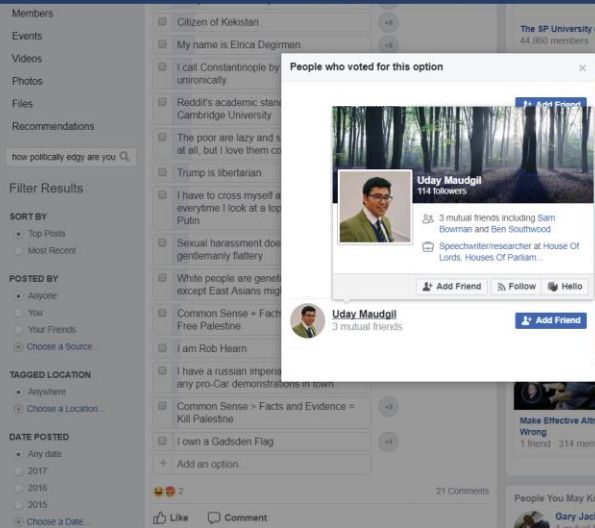 Christian Calgie, a young Tory who is a Parliamentary Aid in the House of Commons according to his Facebook, commented on a poll of whether the alt-right or social justice warriors had more sex:

“I’d still bet SJWs have more sex than alt-righters, even when you account for all that wasted time filling out consent forms ;).”

“Well, you know how alt-righters are; obese, fedora-wearing virgins with embedded misogyny born of the fact they can't get laid. That was the brunt of my generalised perception, then the consent form reference was just a tongue-in-cheek joke." 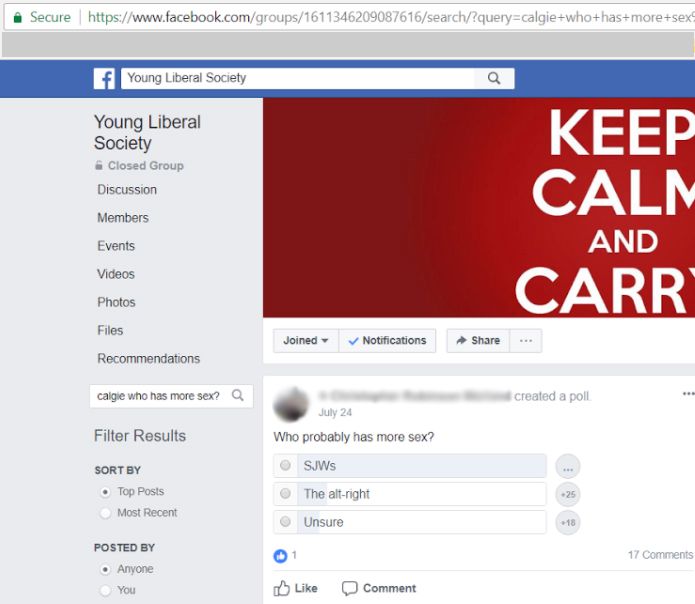 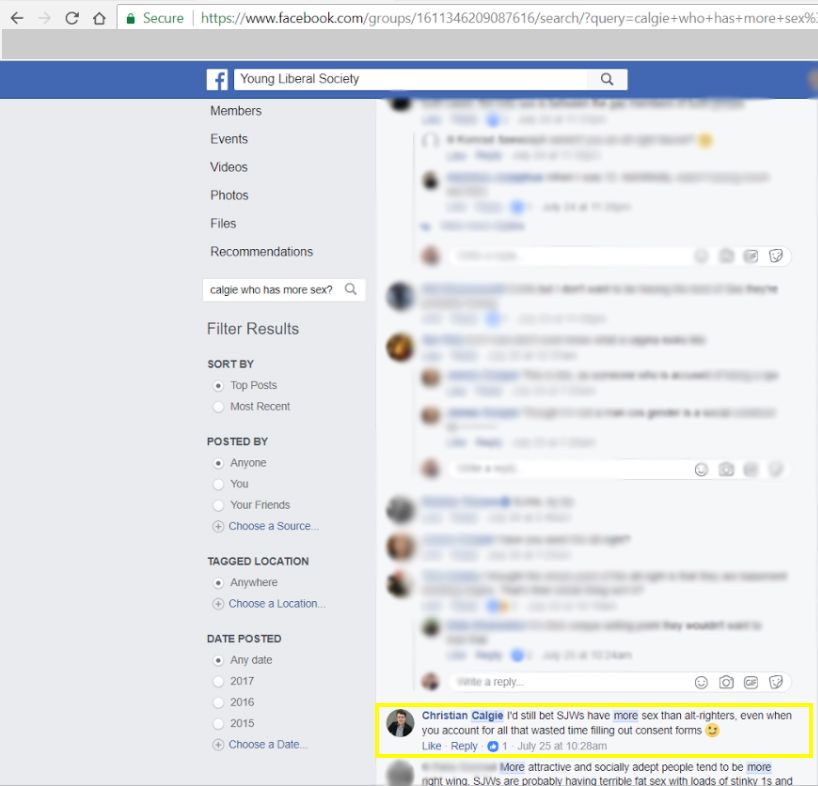 The “Young Liberal Society" was created in order to preserve critical thinking, enlightenment values, and an ability to tolerate those you disagree with.

The group has over 2,000 members, many of which are prominent young people in politics, including a former university union president, and a family member of a Tory MP who is active on the Conservative youth scene.

Another post asking people to put forward their controversial opinions contained comments such as “white people are intellectually superior to black people, on average”, “deport the poor to solve poverty” and “giving women the vote was a mistake.”

Katie Fanning, who sits on the board of directors for the UKIP National Executive Committee, posted “Diversity = White Genocide”, a comment that was picked up by Hope Not Hate. White genocide, a topic that features prominently in the group, is the belief that mass immigration and integration are being promoted deliberately to eradicate white people.

Responding at the time, Fanning posted the following on Facebook: 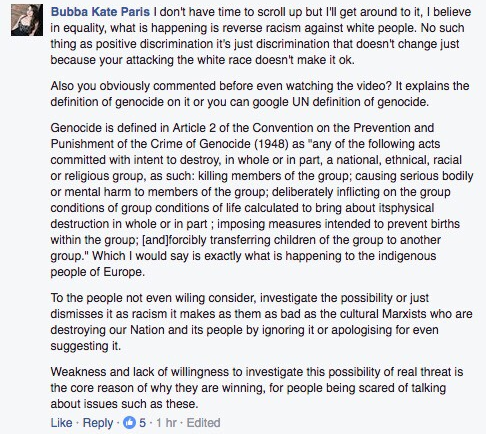 Christian Calgie also told The Tab his views on the group:

“YLS is an absolute hive of degeneracy and bullshit, treading a fine line between libertarian twats and actual un-ideological lunacy. I mute all notifications from it. The less I think about YLS the less likely I am to suffer from an aneurysm before the age of 30."

“The group is run on a policy that respects free speech, in which we largely, bar incitement of violence and serious harassment of members, allow individuals to comment as they please. It is up to other members to counter racism, sexism, rape apologism and other ideas."