RIP to The Haunt

Yes, you read that right. The Haunt have changed their name and are now officially branded "CHALK".

Back in March, The Haunt announced it was locating to a new venue, one which promised to be bigger and better than ever. The new venue is set to have a 400 seat capacity, with collapsing walls for those more intimate gigs and events. But little did we expect it would have an entirely new logo and name.

CHALK took to Facebook today to make their announcement which has so far received mixed responses from their loyal fanbase. 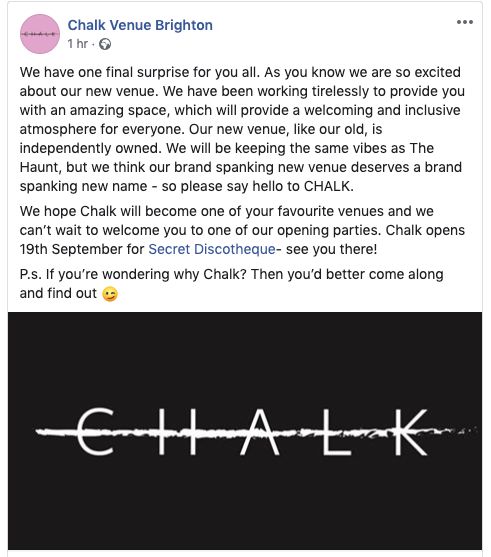 And if you’re wondering why Chalk, their Facebook post says you’d "better come along and find out". We’re thinking a giant chalk board for us to scrawl all of our drunk messages on.

Speaking exclusively to The Sussex Tab, a representative from Fat Popadaddy's says "I think the new name will be a good start for a new chapter in the bigger venue"

"We've seen it ourselves, it's got all the same drinks deals and the same charm, we know you won't be disappointed".

Opening night is this Thursday 19th when the famous Secret Discotheque event shall be returning to the new venue.

A guide to birthday celebration whilst also in self-isolation

A seal has been seen sunbathing on Brighton Beach