It’s He for She Week in St. Andrews and this is what’s happening

Get yourself down to Sinners for some He for She cakes

Since October last year, He for She St. Andrews has been working tirelessly to promote gender equality in this little town. They started last year with their launch party at The Adamson, where they filled the venue with the largest number of people the bar had ever seen for a single event with throngs of crowds turning out to meet the committee and listen to live music.

Almost a year later, and the subsection of the UN Women's organisation He for She has gone from strength to strength. The Tab sat down with the female President (they have both a male and female identifying President), Aysha Marty to discuss the He for She Week, and her goals for the society in the future.

"The aim of He for She Week", Aysha suggested, "was to promote involvement in He for She events from people who normally wouldn't consider coming, and encourage engagement from people all over St. Andrews rather from the same group of people all the time". That being said, the wide range of events on this week should do just that.

Yesterday, the society put on a Self Defence class in association with the Karate Club which ended up being completely filled. "That was a really positive start to the week actually, here's hoping it continues" Aysha laughed as she recounted what's happening for the rest of the week. 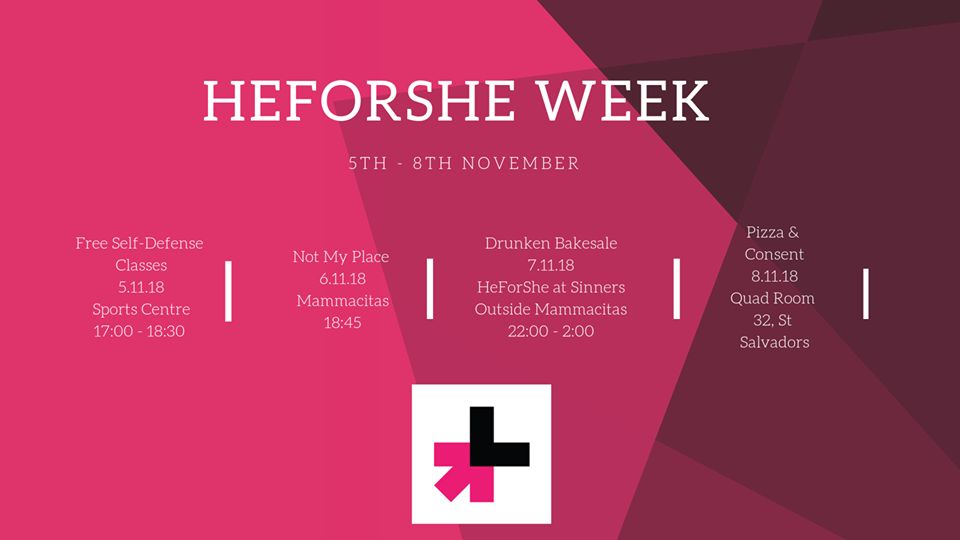 Tuesday – Not My Place at Mammacita

In terms of plans for the future, Aysha and the rest of the committee hope to make He for She week a regular in St. Andrews, as well as making their 'Not My Place' events a monthly event.

"We'd love for He for She to be something people are really proud to have their name against, and really eager to get involved with" Aysha says, "next semester we're hoping to up our events a little more, and have a big speaker series going to get a wide range of people interested. We're hoping to get the Director of Programmes for UN Women here to speak which would be wonderful!"