Everything we took for granted in Sheffield last year

Gone but not forgotten

As this year has quite clearly proven, we should never have the expectation that things will always be there. Brexit split the country, Brangelina went their separate ways and the Toffee Deluxe was cruelly axed from Quality Street.

Of course, uni life in Sheff is pretty much top-notch, but do you ever think about when times were much simpler? Let us refresh your memory, here’s to Sheffield’s old heroes and the things we shouldn’t have taken for granted.

The glory days of Yik-Yak

Now we cast our minds back to a time where Sheffield’s Yik Yak game reigned supreme. Although hard to pinpoint, the addictive app was once in its heyday and every twist and turn of uni life was documented through the comedic comments of Hallam and Uni of’s finest. Prior to its mighty fall, the constant feed of sarcasm, wit, and classic rivalry was everyone’s go-to for a bit of procrastination and top banter.

Who could forget when that poor soul pooed himself on level four of the IC? Or when the Hallam’s cheerleaders were ripped to shreds for their questionable Varsity performance? Other highlights included: the Chilean miners style rescue of people stuck in the IC lift, general Ranmoor-bashing, Tab writers being compared to a tin of alphabetti spaghetti, and the 2015 general election described as the ‘mother of all Corp hangovers’. 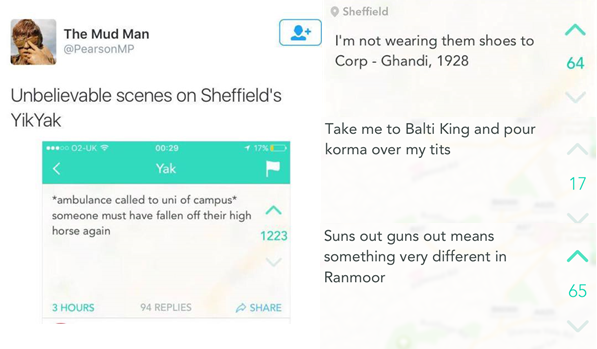 Gone, but not forgotten x

Every Sheffield student longing for the days of first year will have a special place reserved in their heart for DQ. Before it closed its doors and plans were revealed it was to switch audience to church-goers, the mega Monday sesh had its home there. A cooler sister to Plug, the weird remixes were something else and the stairs were as sticky as hell. The queue for the bar was also very much an ‘every man for himself’ battle, but the days of DQ are still sorely missed. 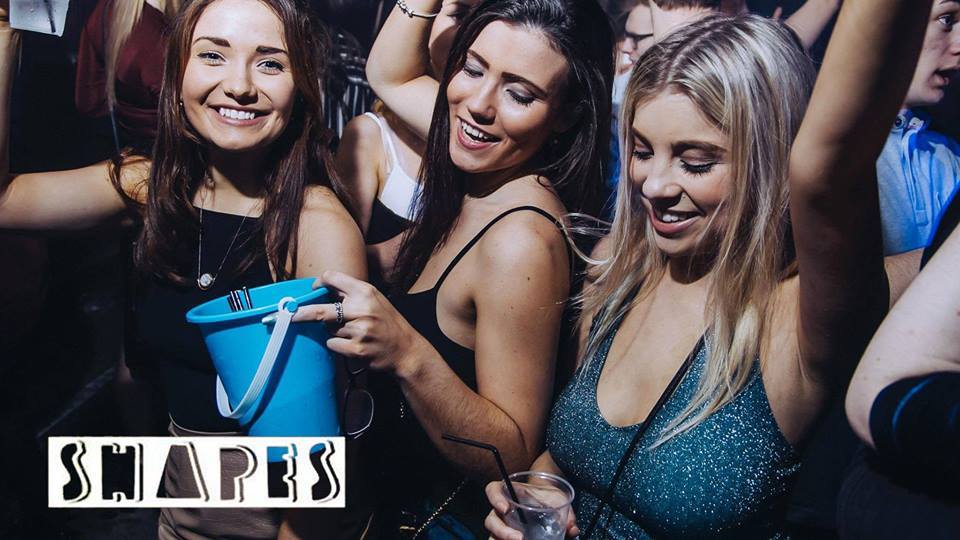 Before Fabric, Sheffield’s legendary Fez was the real bombshell club closure. When the news hit in July 2015, it marked the end of an era, leaving the city’s party-goers in despair.  Originally launched to tap into the underground house scene, the grimy warehouse was famed for being the only club in the Steel City to open six nights a week. Welcoming the likes of Skream, Ben Pearce, Patrick Topping and Dusky, the Fez team prided themselves on their ‘one big family’ atmosphere. Lest we forget that one mischievous little question of ‘Fez?’ that would send your basic night at Pop Tarts spiraling into a full blown sesh.

The demolition of the old building meant freshers will tragically never know what they missed out on. Electric Box, Tuesday Club, Hope Works and Night Kitchen were then entrusted to fill the void, but they’ll always be those who yearn for days of Fez. 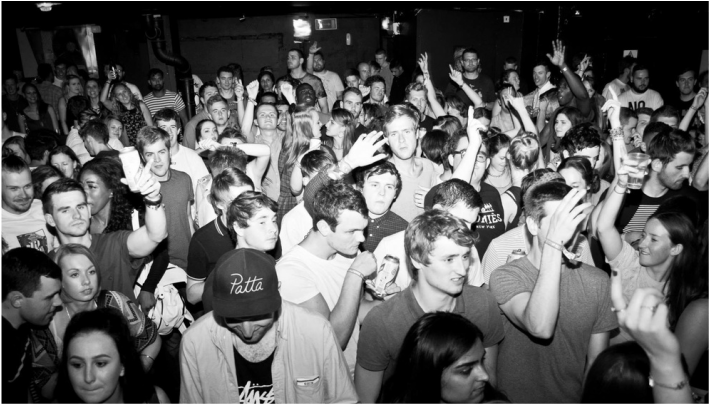 Spare a thought for those much-missed vibes

Bound to spice up any mundane journey into the city centre, the discotastic Party Taxi was the premier mode of travel for a brief moment. Today’s Ubers might offer you control of the aux cable or even some chocolates, yet this is nothing compared to the neon tackiness of the Party Taxi’s inside strobe lights. Your drive to West Street Live in this bad boy was like being transported to a 2004 clubland heaven, but it sadly wasn’t meant to be.

£81 million for The Diamond

Somehow it escaped being named the Worst New Building in the UK in September, but the futuristic eyesore continues to divide and was even once described as the ‘building that looks like a walnut whip’. The Dr. Evil style chairs are rumoured to have cost £500 each and the practicalities during exam season are enough to get anyone raging, so let’s hope the thing came with a warranty and we can get a refund soon enough. 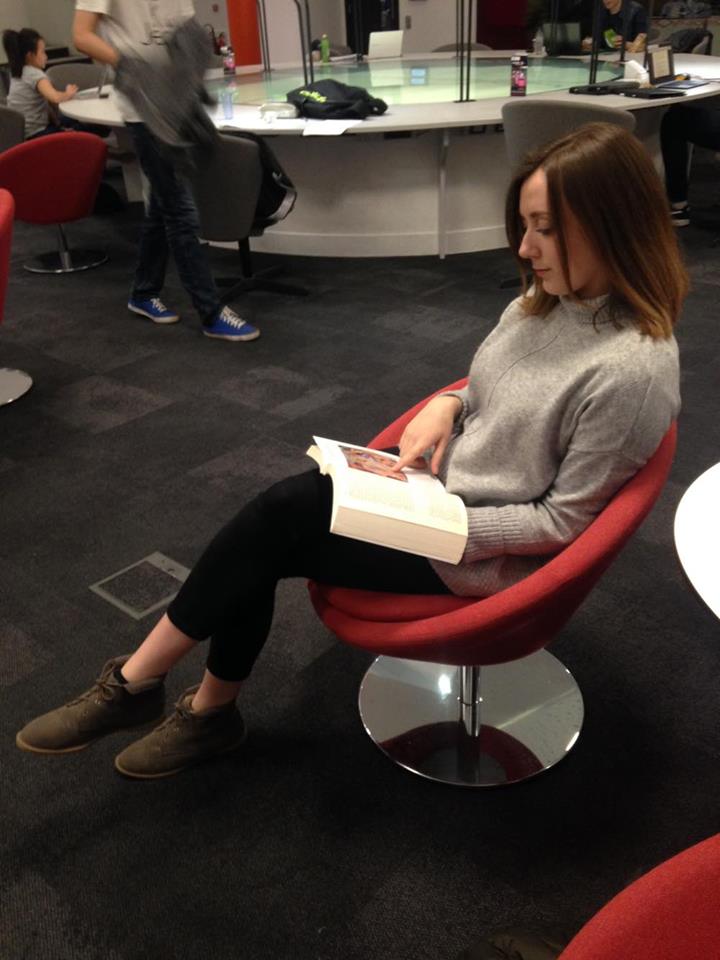 Broomhill Off-license’s 2 bottles of wine for £5

Once upon a time, 2 bottles of wine for £5 was the only proof you needed to justify Broomhill’s place as the top student area in Sheffield. While the taste bordered towards paint stripper, it was one of life’s few certainties that you could count on the deal to provide your predrinks for every Corp Wednesday. It was never some classy blend from the Med, but this cheap duo would never fail you and god do we miss booze this cheap. It’s a crying shame that Broomhill Off-license closed down, a real shame. 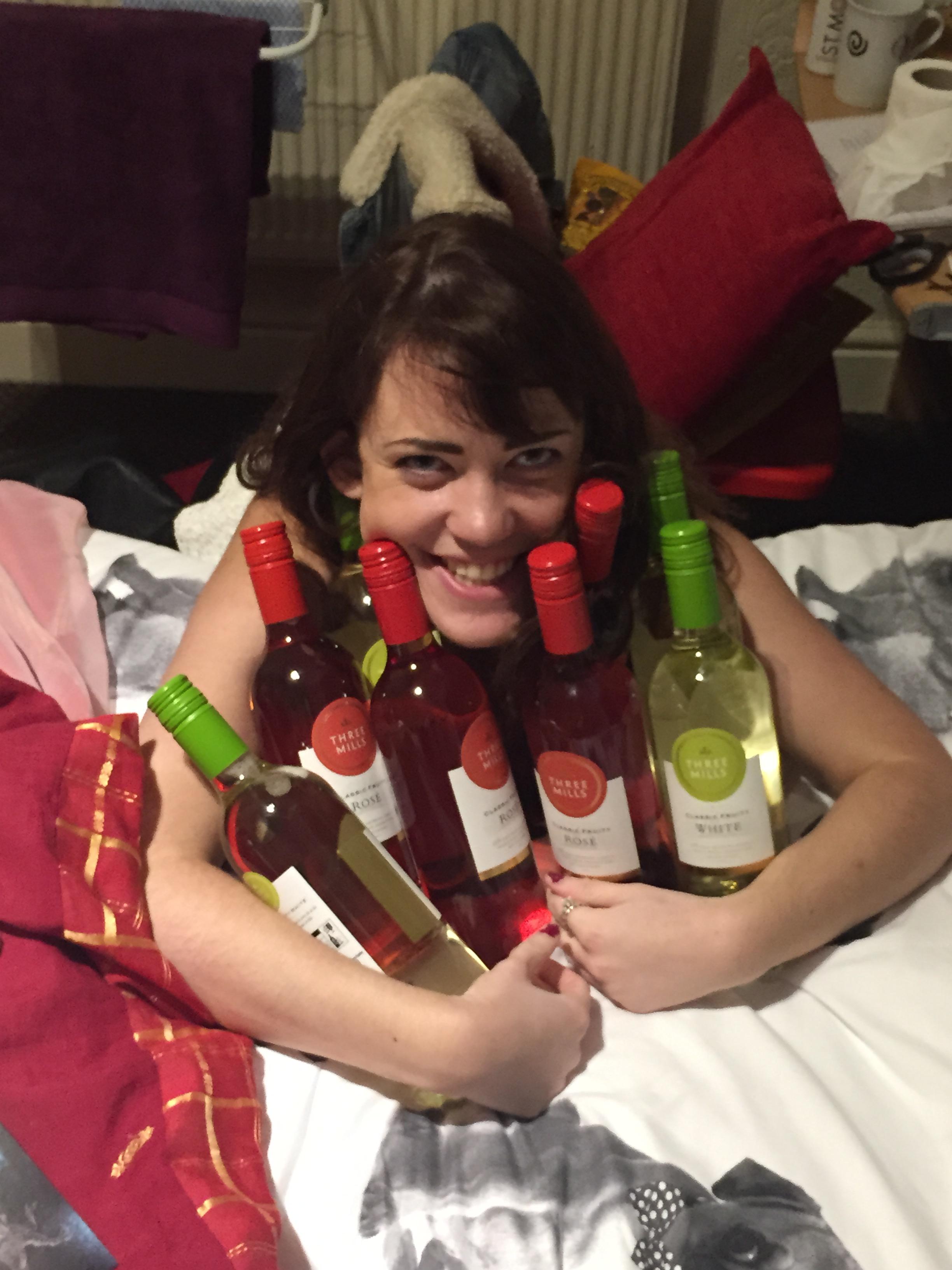 Another dark chapter in Sheffield’s club history was the loss of Vault. Complete with a stripper pole for you to shamelessly swing yourself round during your society’s socials, the West Street haunt was a guaranteed pit stop on every messy bar crawl. A fave for fancy dress fans, you would catch camels, parrots and the occasional tinfoil Jesus all bopping along to ‘Bootylicious’ and ‘This is How We Do It’.

However, Vault’s popularity undoubtedly lied with its crowning glory: the incredible £5 round. The combo of a Jagerbomb, vodka mixer, Sambuca or Sourz shot, and a VK was truly the stuff dreams are made of. Cheap and always did the required job. While Vault made way for Bierkeller, the £5 round was revived by Tiger Works and the memories will live on. 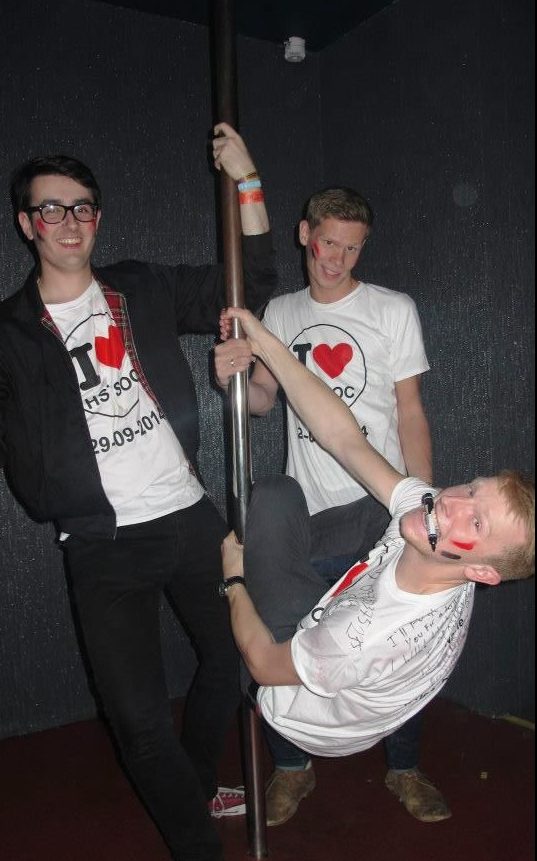 Put your bins away properly, you dirtbags

Move over Monty the Penguin, Swanaldo is the new hero in town

Sheffield is officially in the new Tier 3: Here’s how it affects students

It’s the toughest restrictions of any tier

Almost 600 have signed so far

There are seven types of Sheffield student during the pandemic, which one are you?

‘We have been forgotten’: How the student mass exodus is impacting Sheff students

Placements, deadlines and jobs are being impacted

The coronavirus pandemic as told by 20 Sheffessions

We were so clueless in March

‘Gym was the only thing keeping me sane’: Sheff students’ anger grows at restrictions

‘His courage, stoicism and positivity in the face of illness were extraordinary and inspirational’

He died from coronavirus today

‘If the SU want to contact me for rights, please don’t, this took forever’

Sex, solo self-care and sanitiser: How have the singletons of Sheff been keeping?

‘I know the New World Order is involved’: The Sheffield anti-lockdown protest

‘Once the gov has our compliance, they’ll enslave us all’

In October, there were over 100 cases in just one day

Don’t sign a contract for a house until after Christmas, Sheffield SU warns students

‘Once you’ve signed a contract, it’s really difficult to get out of it’

A Sheffield Hallam staff member has died after contracting coronavirus

The university said they were ‘deeply saddened’

‘I could get a 10 grand fine but it’s worth it’: Inside Sheffield’s illegal Halloween rave

Over 300 people squeezed into the abandoned building in Kelham Island

New coronavirus restrictions have forced many venues to close.