BREAKING: Juicy is back

And it’s in the Shipping Forecast

After a rather disappointing stint for Juicy at The Merchant, followed by it’s mysterious disappearance altogether, the freshers of 2016 never truly got to experience the height of Liverpool nightlife at the weekly R&B night.

But in what can only be described as the perfect start to 2017, an announcement was made earlier this afternoon on the Juicy Facebook page that the night will return to its original venue at The Shipping Forecast on Slater Street. This time the night will take place on a Tuesday rather than the traditional Thursday night slot, sparing us all from the the infamous ‘shit-Tuesdays’ of Liverpool nightlife. 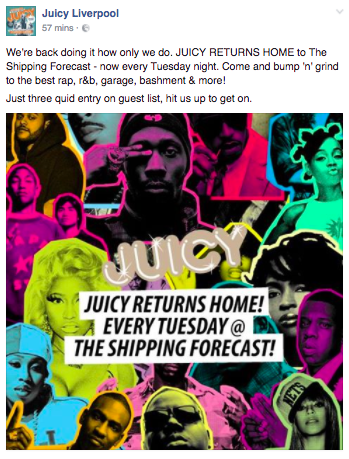 There is a god after all

Ellie Rice, a third year Communications student said that “Juicy’s departure was one of the greatest losses we experienced in 2016, it hit me really hard. I’m overjoyed it will be back for my last semester in third year and hope to spend many Tuesday nights screaming along to TLC drinking Red Stripe”