Sarah Guerra, Head of Diversity has called the campaign ‘abhorrent’

Today, King's emailed staff and students, condemning the campaign against Muslim students being conducted next week.

Named as "Punish a Muslim Day", it is classed as a racial hate crime day that targets the Muslim population.

In an email sent by Sarah Guerra, Head of Diversity and Inclusion at King's, she warned of the coming day as an "unsettling day for staff and students" and that the university is completely against any such acts committed.

It was also stated that some of the harassment and hate crimes linked to the campaign advocating racist violence had already affected King's students, although no further details were given.

She wrote "this campaign is abhorrent and we strongly condemn it as well as any behaviours or speech that contribute to the marginalisation and oppression of members of our community." 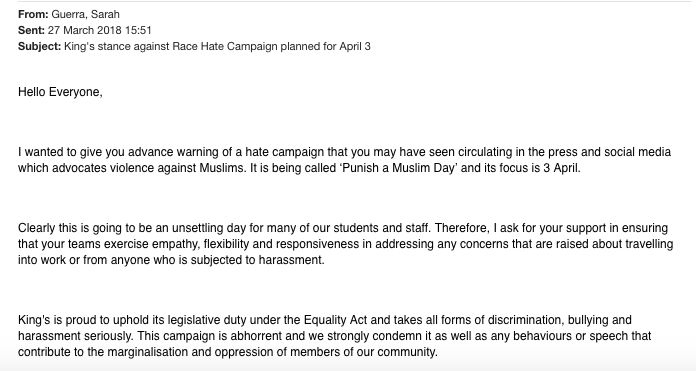 The email concludes with two links to report harassment on campus or at student residences: It Stops Here – which explains how to report bullying and harassment within King’s, and a King’s Anonymous Reporting Form.

Earlier this month, Twitter user Rowaida Abdelaziz posted an example of a letter found in a postbox in East London advocating for committing hate crimes against Muslims.

“Punish A Muslim Day” letters are being sent to families in East London. The letter details a point system for each action & a reward. For example pulling a Muslim women’s hijab is 25 points, throwing acid is 50 points and burning or bombing a mosque is a whole 1,000 points. pic.twitter.com/6kmCrDrXt0

The text encourages would-be assailants from "white majority nations" to "not be sheep". Attached to the letter is a score sheet that awards increasingly graphic and violent acts with a fake scoring system:

Verbal abuse is worth 10 points, throwing acid is worth 50 points, burning and bombing a mosque is worth 1000 points, and the highest ranked act of "nuking Mecca" is worth 2,500.

The letter states "they have hurt you, they have made your loved ones suffer. They have caused you pain and heartache. What are you going to do about it?

"Sheep follow orders and are easily led, they are allowing the white majority nations of Europe and North America to become overrun by those who would like nothing more than to do us harm."

TellMAMA has been keeping track of the 3 April threats. The UK based organisation measures anti-Muslim sentiments and incidents – they also provide support to the victims of hate crimes.

If you have been affected by any of these incidents, please report to King's immediately.