No, King’s isn’t replacing the portraits of its founders with a ‘wall of diversity’

Claims have been denied by the University

The Telegraph recently reported that at KCL’s Institute of Psychiatry, Psychology and Neuroscience would be altering its main entrance by replacing several busts and portraits of its “founding fathers” with a “wall of diversity”.

Upon investigating this further, The Tab can now reveal that this information appears to be false.

The article cited an interview with Dean of Studies, Professor Patrick Leman, in which he supposedly unveiled plans to “move portraits of former faculty staff from the main entrance wall and replace them with more BME scholars.”

The project’s initiative was stated to be based on “pressure” from the student body.

The President of the King’s Conservative Association, Sam Barrett, was also interviewed by the Telegraph and reportedly commented that it was “political correctness gone mad.”

A number of alt-right affiliated websites picked up on this comment and followed it up based on the Telegraph’s publication:

However, The Tab emailed the King’s PR office to verify this information and they replied: “Contrary to reports in the media, we have no plans to move or remove our Dean’s Gallery of painted portraits or busts of our founders.

“Our ‘Inspiring Women – Professors at the IoPPN’ photographic portrait exhibition which comprises over 31 women professors is likely to be relocated across the Institute to relevant departments. In its place, the IoPPN is considering a new photographic exhibition provisionally entitled ‘Portraits of a Global Diverse Institute’ featuring a series of portraits of IoPPN staff, students and alumni.” 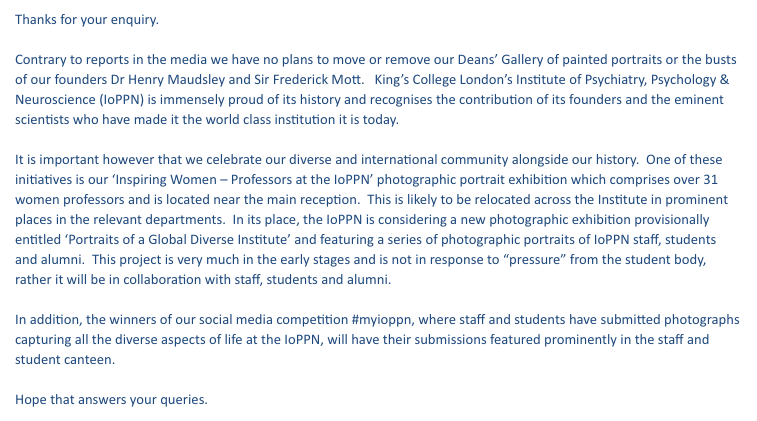 When questioned, Professor Patrick Leman also denied that such plans are in order.

In summary, no portraits or busts are to be replaced in the IoPPN, on Strand Campus or anywhere else.