‘Firing squad for these baby murders’: The abuse faced by the proposer of SU pro-choice motion

Isadora Sinha proposed a motion to the Students' Union AGM last week calling for the SU to adopt an official pro-choice stance. The motion passed by a big majority, and is now SU policy.

Since then, Isadora has faced online abuse and what she calls a "coordinated attack" against her. She has worried for her safety, and been warned not to leave the house alone.

There has been numerous hostile articles posted on pro-life websites.

In comments on the Society for the Protection of Unborn Babies Facebook page, one commenter called for "firing squad or gas for these baby murders". 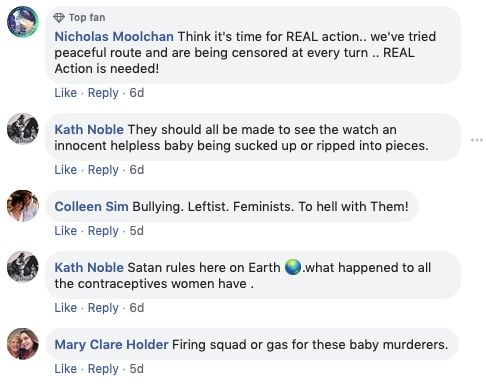 Other comments referred to the proposers of the motion as fascists. 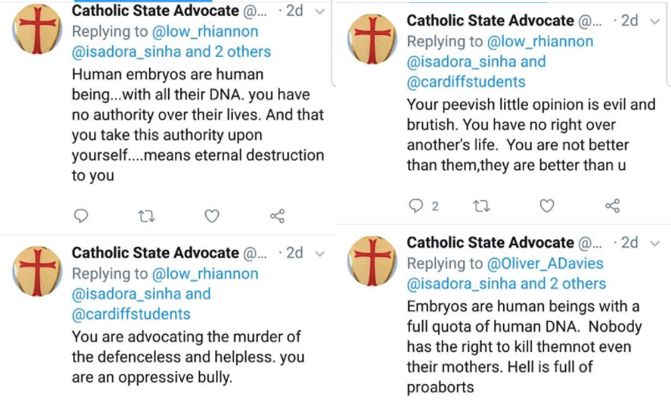 "People have called us horrible names, saying we're murderers and disgusting human beings. For someone who was just exercising their democratic right it's been hellish. I'm being punished for daring to strive for equality. External organisations shouldn't be attacking me when there has been a democratic vote."

"I've been told by the SU to not go out alone, especially not at night because they are very aware there's been external backlash and this could be quite a serious incident."

Cardiff Students for Life President, Luke Doherty, has told pro-life sites that an “intolerant and disrespectful crowd of hecklers” suppressed pro-life students at the AGM. 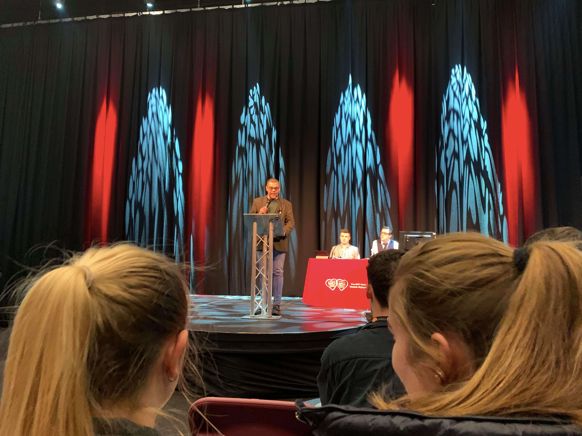 Luke Doherty speaking against the motion at the AGM

He told another website: "I feel persecuted as a Catholic. Vitriolic anti-Catholic rhetoric has been posted online and it is believed that the safety of our Catholic Society members might be comprised."

We asked Isadora for her views on the AGM debate:

"I think both sides stayed respectful despite having polarised views. I was near the front and didn't hear any heckling. I didn't agree with what the opposition was saying, but they had the right to say it."

An article on US website Church Militant about the AGM motion was shared on Facebook by the Catholic Society and the University Catholic Chaplaincy.

The article attributed words to Isadora that were not her own. It also referred to 'abortion mills'. 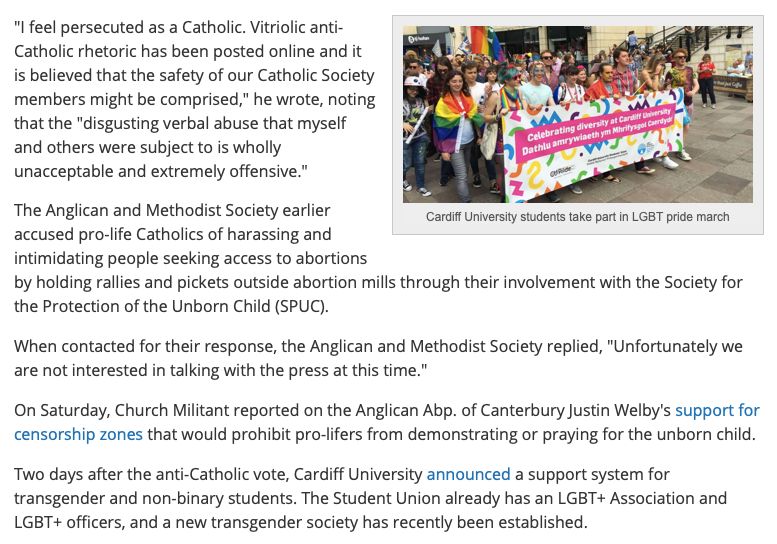 The article in Church Militant

Isadora said: "The way they framed it is like 'oh you can tell what kind of people these as they go to pride'. It's a disgusting way to talk about it. The university chaplaincy should not be sharing this." 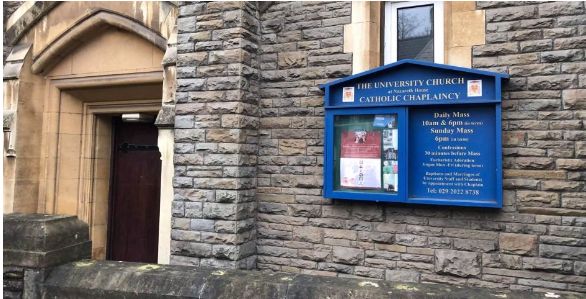 Isadora Sinha told us: "Before the AGM debate, Father Sebastian from the chaplaincy likened what was happening to Catholic students to what happened to Sophie Scholl. This was likening pro-choice students to Nazi's, which was disgusting."

The Students' Union has released a statement on the pro-choice stance. They said that: "appropriate measures will be maintained to protect freedom of speech and expression in line with the law. We urge all students to consider the potential impacts of their words and actions on others."

When asked about SU support, Isadora said: "I think they're doing as much as they can. I don't think they realised how much this would blow up."

"I feel like I wasn't really warned about the consequences when I talked to them about proposing this. They should warn students there could be external backlash."

The Catholic society has left the Students' Union following the motion. The Catholic Chaplaincy said students would be at risk of being excommunicated if they remained affiliated with the SU.

"It could be that they were trying to guilt people into voting their way, or that someone actually threatened them with excommunication which would be incredibly unfair, but this is a problem that needs fixing on their end."

"The motion wasn't meant to make them leave the guild of societies. They claim the motion caused it when really it's been their choice."

The motion called for societies to be prevented from spreading misinformation. Isadora told us: "The SU have contacted Cardiff Students for Life and said nothing will change expect their information now needs to be referenced. For some reason that's causing big problems. I think because they know a lot of the information they've used before hasn't been accurate." 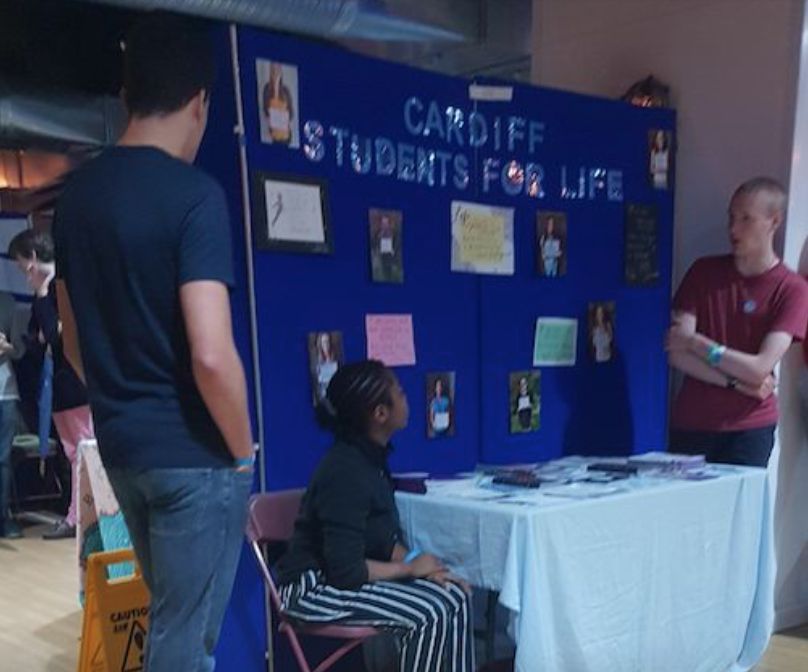 The Students for Life society at this year's freshers fair

We asked Isadora about why she proposed her motion.

"A lot of people came to me expressing their discomfort with misinformation that has been spread. Girls who have had abortions to get here don't feel accepted, or feel like they have to be ashamed of it. 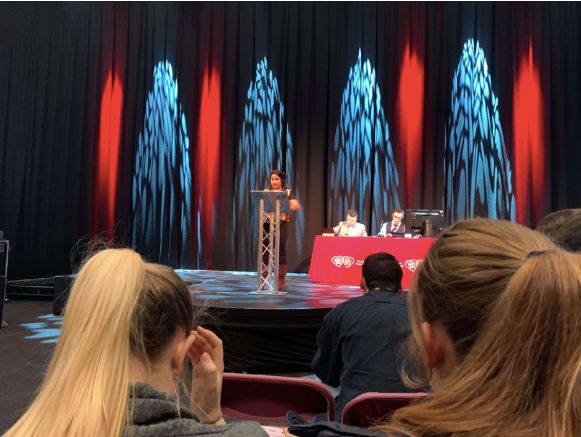 "People have said that we should have kept neutral, but being pro-choice the most neutral stance. Pro-choice does not mean pro-abortion, it means supporting the right to keep it as well. I wanted to provide inclusivity and a sense of belonging no matter what choices you've made.

"I want to say to all students within the SU and University; no matter what your views are just try to get along and don't insult each other.

"They're trying to make me regret it, and I did for a time after the abuse I received. However, since then students have disclosed to me how much this motion has helped them. I don't regret it now."