They plan to protest outside abortion clinics

There is a new pro-life society at Cardiff University Students' Union called 'Cardiff Students for Life'.

The purpose of the society is to "promote, expand and develop understanding of pro-life issues" and allow students to "explore ideas within the pro-life movement in a free environment."

This includes talks from pro-life speakers and getting involved in national rallies such as the March for Life.

Posted by Cardiff Students for Life on Sunday, May 6, 2018

According to the Students' Union website, the society will take part in '40 days for life' which involves standing outside abortion clinics and trying to persuade women not to enter.

A Students' Union spokesperson told the Cardiff Tab: "[The SU has] a duty to uphold the principles of freedom of speech, as long as it doesn’t shut down activities and debate."

On the topic of the '40 days for life' march possibly shutting down an 'activity and right', a Students' Union spokesperson told the Cardiff Tab that all activities must meet behavioural standards, which "outline harassment and bulling as offences that would lead to investigation." They said: "The SU will take action if any behaviours do not meet these standards."

The society previously existed from 2008 onwards. In 2016 there was a petition to disband the society. However the Students' Union told the Cardiff Tab that the society disbanded due of a lack of active members. The society has now returned this academic year. 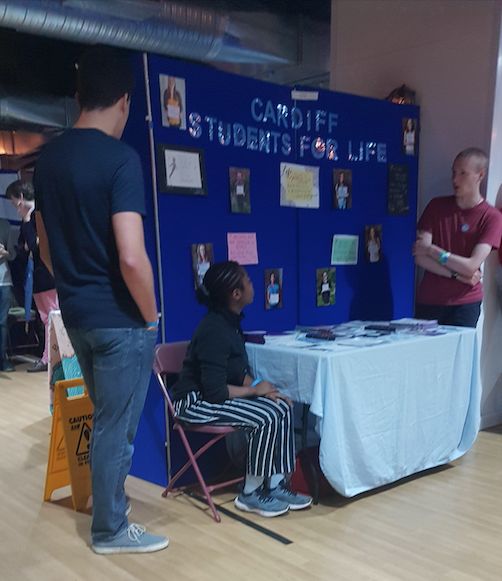 The society had a stall at the freshers fair. Photo credit: Isadora Sinha

We asked students what they felt about the presence of a pro-life society at the university. Cardiff student Isadora Sinha told the Cardiff Tab: "The pro-life society is backwards and unscientific. Bodily autonomy is a human right and it is disgusting that women are still fighting against misogynists that wish to take this away.

"I do not think the SU should allow the pro-life society to be affiliated with them as it goes against the principles of equality that the SU stands for.

"It was inappropriate for them to have had a stand at the fresher’s fair; I could see students avoiding it and looking visibly disgusted. Free speech is not a free pass to tread on women’s equal reproductive rights. The SU policy should be reviewed."

Following this response, the Students' Union spokesperson said: "No complaints have been received from students regarding the presence of any society at Societies Fairs in recent weeks. If any student has concerns about the activities of a student society they should report the issue through the SU complaints process.”

The Cardiff Tab reached out to CU Feminism, Cardiff Uni's Feminist Society, to gauge what their stance was on the pro-life society. The President said: "I strongly believe that pregnant people have the right to decide whether to have an abortion without feeling guilty or stigmatised, and I am concerned that the recent discourse around the 'pro-life' society is contributing to the stigma and shame around it. I particularly object to the descriptions of surgical abortion as 'horrifying' and 'sobering', and to the claim that we live in an 'abortive' society, found on the Student's Union web page.

"Some of the content the Students for Life society are putting up is really misleading and that this misinformation shouldn't be allowed by the Students' Union."

"If you want to hear more about why having access to safe, legal abortion is so important, the Feminist Society will be holding events."

On the topic of reactions against the pro-life society, the Students' Union spokesperson added: "The Students’ Union considers applications from students to form Societies that represent a diverse spectrum of activities, beliefs, faiths and interests. Some of these groups represent views that others may disagree with, but as long as activity is safe, legal and in line with the expectations set for all affiliated groups, the affiliation will be considered.

"Societies must register activities taking place and where appropriate undertake a risk assessment. Such an assessment will consider pro-active controls that minimise the risk to participants and anyone in the vicinity of the activity taking place."

The Cardiff Tab reached out to Cardiff Students for Life for comment and they said: "SFL complies with the Law and all the rules of the Guild of Societies. SFL welcomes free speech and debate. Accusations of harrasment by SFL members would results in their being expelled from the society, were they supported with evidence".

You can question the Vice-chancellor about the strikes next week

Stop what you’re doing: A Friday Night Dinner special is coming to a Cardiff club next week