Cecil, the new poster-lion of trophy hunting lived a long natural life before his untimely death. Tigers in parks throughout Thailand don’t get this luxury.

We’ve all seen the images pop up on our news feed. Snapshots taken at tiger parks in Thailand – images of tourists smiling alongside unusually relaxed predators.

It’s almost become a rite of passage for the typical gap yah student wanting to get up close and personal with one of the world’s most endangered animals. 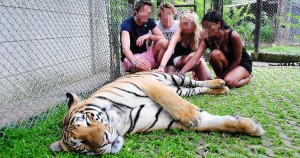 The sedated tiger in its most unnatural state

But the sad reality of these images has recently been exposed, and it’s now widely known the animals are often drugged and abused for social media likes. Posting the images online mindlessly promotes this awful form of tourism and the cruelty these animals endure is unprecedented.

Visitors have reported disturbing and upsetting encounters with the animals in these “temples” with both the adult and baby tigers being slow and exhausted. Guides shrug off accusations of drugging the animals by saying they’re just tired from the sun: a ridiculous claim, considering the climate of their natural habitat. Guards holding huge sticks surround the tigers, ready to jump out and beat them to submission if they stand up, claiming it’s for the visitors own safety. None of this is captured in those smiling photographs.

Recently, there’s been growing furore over images of hunters stood alongside their trophy animals. Cecil the lion’s killer, Walter Palmer, was pictured alongside an array of animals that died at his hands, smiling proudly as he posed with some of the most voracious predators in the world. The internet has called out these hunters as cowards, blasting the killings as mindless actions, achieving nothing more than building the hunters’ egos.

However, while Walter Palmer, Kendall Jones and other trophy hunters pretend to be contributing to the conservation of these beautiful, magnificent animals, so do the thousands of tourists who flood into Tiger Temples and Kingdoms every year.

These so-called sanctuaries are breeding facilities for the illegal tiger trade, which can lead to poaching. Tigers are often traded to farms out in Laos where their fate is unknown, subject to a life of confinement with no enrichment and drugged to be compliant for constant selfies. They suffer from behavioural and physical problems from their life of maltreatment. 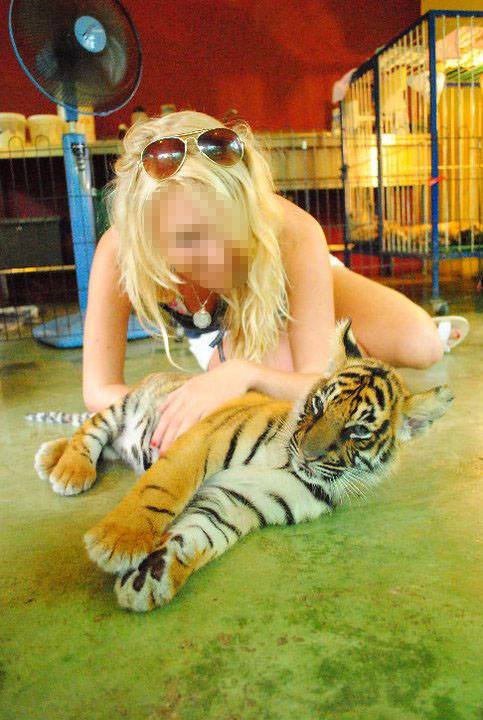 A cub bred purely to be a photo trophy.

For trophy hunting, animals are often bred in reserves, much like the cubs bred in tiger parks. The difference is it’s the opportunity to kill them which is sold for a large fee. The hunters often take the opportunity to pose with their kill, to show off to friends and prove their “closeness” with the animal, just like the tiger selfies. But at least these game animals get to live a fairly natural life before they are killed, unlike the cute little tiger which helped someone reach 100 likes.

Trophy hunting is not good in any way shape or form. It’s a hideous thing to do and luckily Walter Palmer is feeling the consequences of his actions. Now though is the chance to stop animals being used as trophies altogether. Stay morally consistent: if you hate trophy hunting, hate the overall exploitation of animals for leisure.