We’re a disgrace and we LOVE it

We were slated in the national press for our behaviour at CARNAGE. The Tab’s Gemma Neath explains why if you don’t go, you’re a terrible excuse for a student…

The night that has caught global attention as “Britain’s most notorious pub crawl” and named Cardiff as “a mecca for Binge Britain” hit the city once again earlier in the month and got everyone talking. 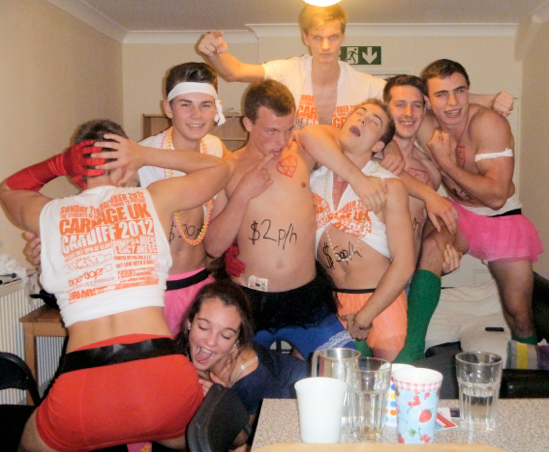 Messy pre drinks that got out of hand lead you straight to Tiger Tiger, missing Glam. You are ordering buckets by 9pm. You then follow the crowd to Revs. Your memory from here deteriorates. Along with your shame! You often fall over but find it hilarious when you pop back up and shout YOLO at anyone who saw. By the time you leave for Walkabout (those of you who are lucky enough to make it this far), your heels are off, top ripped, and you are covered in pen and jager. You stagger to Walkabout where you attempt to dance whilst holding yourself up on fellow Carnage-goers. Ideas from peeing in bins, dancing on tables and making disgusting photos at cameras seem the funniest ideas you’ve had. You end the night with a Chip Alley kebab on the pavement and a piggyback home from a stranger.

But for those of you that this has the effect of thinking you should stay in and attend Uni on Monday…man up! Face up to the fact that missing Carnage makes you a terrible student.

These nights are the only nights in your life that you will have the chance to dress up despicably, behave like absolute idiots with 2,500 equally drunk fellow students, and wake up in the morning with the same feeling as the majority of students in Cardiff, as if you’ve been on ‘The Hangover’, knowing you can justify this and any regrets with one word… ‘Carnage’.