I don’t think it can get any crazier than this…

We’ve made it! Week one of Lent 2021 is over and it’s fair to say that our first week back has been a hectic one. Amongst all the pre-reading (that was meant to be completed over the vac… eeek) and adjusting to Cambridge-from-home, there has been an abundance of juicy news. Varsity cancelled the ski trip (cri), the MMLL faculty promised a safety net for its finalists and Rent Strike Cambridge postponed its strike until Easter term.

But, as always, the big headlines are only just the tip of the iceberg. We’ve compiled all those little pieces of local and college news you may have missed, to keep you up to date on all things Cambridge. Given all the rogue things that went on over the past few days, we promise that reading this won’t disappoint:

It’s official! Cambridge is the best place to be during a zombie apocalypse

Cambridge has officially been declared as the best place to be during a zombie apocalypse (jokes on you O*ford).

This announcement has come from comparison site, SaveOnEnergy, who have actually conducted a very thorough study, so thorough in fact, it could definitely form the basis of a dissertation.

Peace of mind for many we're sure!https://t.co/Hy9PlX1z1l

The city came out on top due to its easy access to vast farmland and high usage of renewable energy. Rumour has it that in an unknown Cambridgeshire location, there is an apocalypse “survival farm” complete with a nuclear bunker! You can catch me hiding in there when I’m trying to avoid my weekly seminar.

Are public executions returning at Pembroke?

Earlier in the week Pembroke College created a stir on Twitter when they started work on a new installation in one of their college courts. It turns out they were installing a new sculpture, but for some, the setup seemed to look like public executions were making a comeback.

The college clarified on Twitter that the whole executions theory was “not quite” the real situation, and that actually, they were actually installing a sculpture that has been loaned to them.

The sculpture has very kindly been loaned to Pembroke by Mr Hall. pic.twitter.com/PzOuK4rfR6

In more serious news, an open letter that cites college accounts from 2018-19, has been circulating at Gonville & Caius College this week demanding that the college commits to paying all staff the Real Living Wage.

The letter has been signed by over 50 Caius students, both current and alumni, and by over 35 students from other colleges.

The letter cites the “insufficient and unjust” wages the college pays to some of its workers and that making the commitment to a Real Living Wage “is the only fair and decent thing to do, respecting the dignity of its workers and showing appreciation for all the hard work they do…”

Caius responded to the letter on its website, stating that they ensure that all permanent college staff receive at least the Real Living Wage and that throughout the coronavirus pandemic furloughed staff members have received full salaries.

Lucy Cavendish College has unveiled plans to build new zero-carbon accommodation with work on the project starting at the end of the month.

The new accommodation will be designed to house both undergraduate and postgraduate students as the college prepares to expand its intake of students.

The project is due to be completed by Michaelmas 2022.

St. Catharine’s College has launched its new Community Spirit Award to recognise students who make “an exceptional contribution to bettering the wellbeing of others,” and perform “notable acts of selflessness or kindness,” displaying “community spirit for the benefit of wider society”.

Our new award means Catz students can now recognise each other for exceptional community spirit. Winners receive a badge based on the Kintsugi-inspired design by Marie Schwencke (2018, Med & Vet Sci) – one of 38 entries submitted by students last term: https://t.co/JqQgkIPC7e pic.twitter.com/cCIPusYoaJ

Recipients will be awarded a commemorative badge and letter from the college Master. Students can nominate each other for the award and nominees will then be selected by the JCR and MCR committees.

Turns out the inauguration wasn’t the biggest headline relating to the White House this week. Master of Selwyn College, Roger Mosey, the former head of BBC Television News, tweeted out a reflection on the time Donald Trump publicly insulted him on social media.

Today is the last day that I can say I was insulted by the President of the United States. pic.twitter.com/SACLJriTXt

Mosey retweeted a tweet of Trump’s from 2012 where he called the Selwyn Master a “lightweight who doesn’t have a clue”. Mosey reflected on the jibe writing that it was “the last day that [he] can say [he] was insulted by the President of the United States.”

I bet you didn’t expect that to be in the column this week!

In keeping with this week’s inauguration in the US, it seems that the notorious Bernie Sanders has been making his way around Cambridge, getting papped almost everywhere in his now infamous mittens (can someone please tell me where I can get a pair?).

Let’s take a look at some of Bernie’s adventures…

I wonder what book he’s waiting for? If it’s Darwin’s Tree of Life sketches he will probably be waiting quite a while…

Bernie taking in the scenes at Christ’s, although he seems to be getting a stoney reception from his companion… get it? Because he’s sitting next to a statue…

If we aren’t allowed on the grass, why is Bernie?!

Bernie definitely won’t be Down-in(g) the dumps in those mittens.

If anyone manages to bump into Bernie next week, can you please ask him where he got those mittens from?

Is Comic Sans making a comeback?

So far we’ve had zombies, public executions, angry Trump, Bernie at the UL, and now… Comic Sans? This must be the craziest week one ever?! 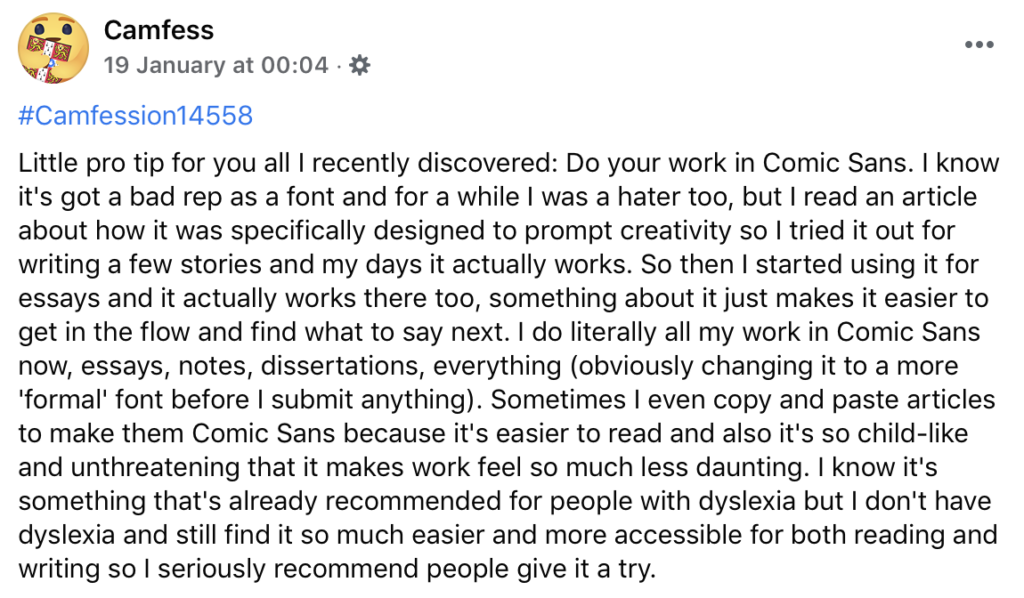 Well, this week Comic Sans made quite a stir on Camfess. According to a post that inspired many reactions and comments, writing essays and dissertations in Comic Sans actually boosts productivity and creativity. This made many students (including myself) give it a go:

We love it when wholesome advice on Camfess actually works!

This week, students of Pembroke College delivered an open letter to their college governing body demanding a full divestment from fossil fuels by the end of the 2020/21 academic year.

The letter currently stands at over 170 signatures from current students and alumni, but as of yet, no fellows have signed.

The letter cites the climate emergency as the “the single most important issue of our times” and urges Pembroke to join the 14 Cambridge colleges who have already pledged to a full divestment.

Oxford and Cambridge to be connected by rail

Errr… why? Why would we want to make it easier for students from *that* university to enter (invade) our beautiful city? But unfortunately, it’s happening.

East West Rail was this week given a funding boost by the government meaning that eventually a train-line will directly connect Oxford and Cambridge… *sigh* (unless you live in Oxford and study in Cambridge, in which case this will probably be quite useful).

Hurray! That’s it! You have made it to the end of week one. I wonder what’s in store for us in week two, if its anything like this week I’m sure we will be in for a wild ride. And remember… keep an eye out for Bernie!

• All the Cambridge news you missed over the vacation

We’re nearing the end of term, so kick back and enjoy these picks in celebration of International Women’s Day

How have students planning their year abroads been managing after the chaos of the last year?

Meet your next Cambridge SU officers!

EXCLUSIVE: Online exams and recorded lectures could be here to stay, Graham Virgo tells The Tab

Virgo hinted at the possibility of the continuation of open book, online, or take-home exams post-pandemic

Interview: The Cambridge students behind the 73-73 Challenge for University Mental Health Awareness Day

They hope to help those struggling recognise: ´That they are very much the majority, not the exception´

Missing ADC cocktails? We made our own inspired by upcoming shows

Cocktail: a mixture of alcohol, bad puns, and love for theatre

Love in the time of Covid-19: 11 college marriage proposals to brighten up your day

Will the Medwards Churros Van be touring to my college anytime soon?

‘The annual sheepcase consisting of the kookiest of characters, the strangest of songs and the silliest of sketches’

You are not alone: How other Cambridge students have found mental health support this term

Jesus’ LGBT+ Officer has described the order as ‘disrespectful and flippant’

The talk was part of a year-long programme of events on ‘Churchill, Race and Empire’ in light of recent debate over Churchill’s legacy

Worries for next term, what to do when you’ve been ghosted, and how to avoid slipping back into childish habits while working from home

If you enjoyed having your mind blown by Behind Her Eyes, watch these nine shows next

Murder Among the Mormons: What happened to Mark Hofmann and where is he now?

These 23 Drag Race UK tweets are the best thing you’ll read today, not a joke just a fact

We asked people for their early house party stories and wow, we were all so tragic

Drag Race UK: What did A’Whora say in her bleeped-out stand-up routine?

Come on BBC this isn’t even that bad

‘There might be a UK Hun? EP’: Tayce and A’Whora on their experience doing Drag Race UK

Revealed: These unis still haven’t given their students a no detriment policy

Despite two national lockdowns, these unis haven’t yet implemented no detriment

Which character from Ginny and Georgia on Netflix are you? Take this quiz to find out

Look, we can’t all be Max

Explained: Why is Daisy May Cooper’s Instagram down at the moment?

It follows a hilarious video with her publishers

Fans of Adam and cats should probably look away now

The rise and fall of influencers: Is the age of giveaways and #ad posts coming to an end?

Was Dubai actually the tipping point we all thought it was?

A group of students dressed up as the ‘Four Lads in Jeans’ and fairplay, they nailed it

Adele and Rob are besties

She disagreed with the direction the show was heading in

Okay, but what do ‘pog’ and ‘poggers’ actually mean on TikTok?

Debunked: Does putting a wet paper towel down stop you crying when cutting onions?

TikTok seems to think so

EXCLUSIVE: Online exams and recorded lectures could be here to stay, Graham Virgo tells The Tab

Love in the time of Covid-19: 11 college marriage proposals to brighten up your day