Following friends Bernard, Jinny, Louis, Neville, Rhoda and Susan, The Waves (adapted from Virginia Woolf’s novel) guides us through their lives from childhood to adulthood. Divisions grow and connections form between the characters, whose lives are permanently entangled although their paths in life begin to diverge. They doubt themselves and their identities when they find themselves alone in the world, and continue to return to each other, united by their simultaneous love and hatred.

Exploring the universal themes of friendship, love, grief, loss and self-perception, Sarah Taylor adapts and directs a play which is preoccupied with the way we continue to redefine ourselves throughout our lives. The entirety of the script is Woolf’s own writing, with nothing added – the novel is already essentially a series of monologues, which fits well into the chosen format. Transposing the novel to the stage is an interesting decision, because Woolf’s use of narration and stream of consciousness means that the characters rarely verbally interact even when they are on stage together, instead narrating their thoughts, feelings and assumptions.

The reverence and appreciation for Woolf’s writing is obvious and while it is lovely to see, it is also maybe the downfall of the play. The script is not sharp or concise enough, a problem which probably comes from fear of losing too much of the original text. The production would have been improved if it was about half the length, and more cuts could have been made to create something  more succinct. 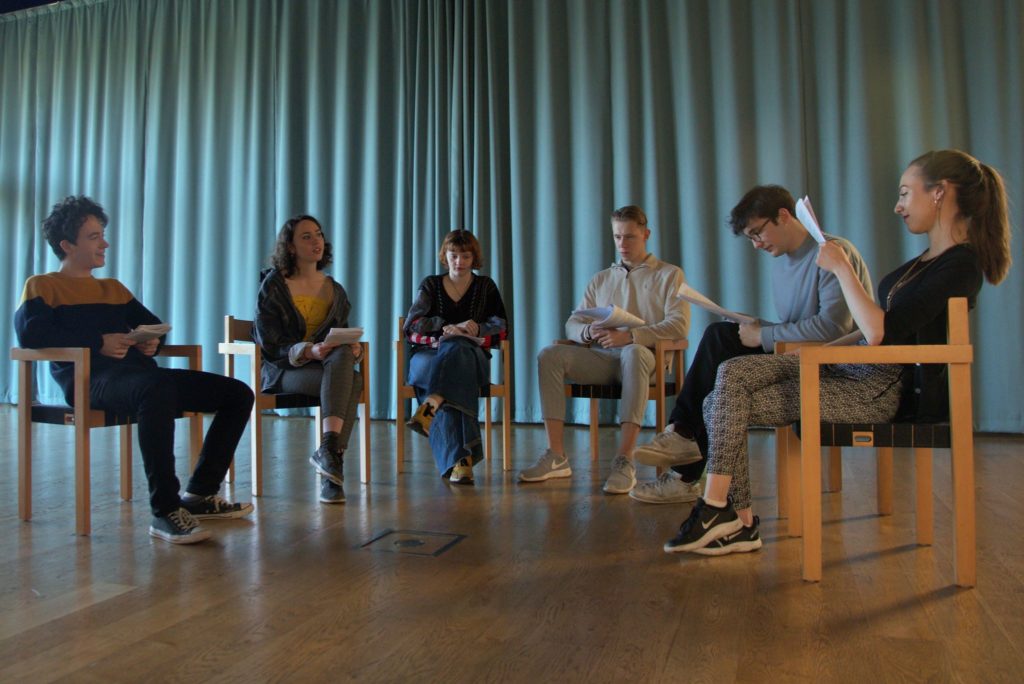 However, the actors really rise to the challenge of the length and form of the play. They are all well cast, and, in their delivery, they make the most of the lyrical nature of the text which Woolf called her ‘play-poem’, and have an excellent grasp of their lines. They are definitely more at ease playing adults than children, and gain energy in the second act. All of them give it their all, but Jonathan Iceton has especially strong stage presence as Bernard, and Amelia Hills is mesmerising in the role of Rhoda.

A large number of people were involved in the production backstage, and it is clear that a lot of hard work has gone into it. The play was described in its promotion as an adaptation ‘celebrating multimedia and physical theatre’. The multimedia aspect consists of projections of the English countryside and coast, with videography by Olivia Railton and Alessia Mavakala. These are frequently interspersed between scenes, and work well to convey the setting and the mood of constant foreboding. However, they cut off perhaps too abruptly, and could have done without the transitions. There is physical theatre, but not a huge amount beyond what is absolutely necessary in order to fill the stage. It would have been nice if there had been more movement to compliment or add to the narrative. What is there is well done, and the ball scene is beautifully choreographed and fluidly executed, with Julia Needham and Charis Taplin as choreographers. 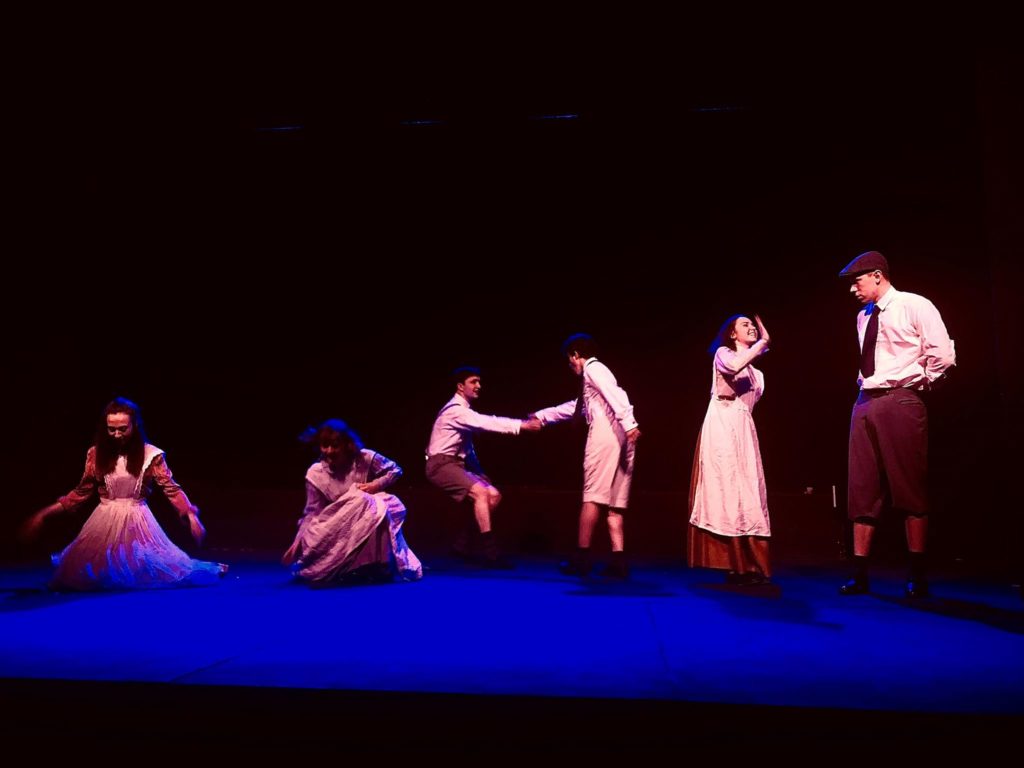 The set design, by Annabelle York and Craig Stewart, is extremely detailed, but the elements of the set need to be introduced a little earlier as the stage is quite barren in the earlier scenes. It is a very big stage for a play that is so intimate, particularly with its many monologues, and the lighting design (by Mahon Hughes) works excellently in shaping and filling it, although the execution could have been more seamless. Hopefully these minor technical issues will be smoothed out by the second night.

The music (composed by Eve Machin and Iona MacPherson, with sound design by William Audis) really adds to the emotion of certain scenes, doing a lot to carry the story along and make it more fluid. The costume design (Caroline Katzive and Ella Muir) is also fantastic – particularly Rhoda’s dress, which makes her look ghostly pale and eerie, foreshadowing what is to come. The costumes compliment each other well, but subtle differences in them allow for characterisation.

It’s very interesting to see a student adaptation of The Waves, and it is an ambitious undertaking that should be commended. However, this production is not as dynamic as it could have been – powerful scenes are undermined by their length, and moments of emotion are lost in far too much text and repetition. It is clear that the aim of the production was to both honour the quiet delicacy of Woolf’s introspective novel and her experimental form, but also use movement, videography and staging to give a new perspective. Perhaps this could have been achieved with more time or rehearsal, but as it is, it feels like a production which has not reached its full potential.