An email was sent out by the Master yesterday

There have been two more incidents of hostility towards Downing students from East Asia in the wake of the escalating coronavirus crisis.

The Master, Alan Bookbinder, sent out an email informing College members of the two episodes and clarifying how students and staff should go about reporting cases of discrimination.

The first incidence involved a recent Downing alumna from Hong Kong had her hat snatched from her head on Regent Street.  The second incident concerned a PhD student from Malaysia who was physically and verbally abused by a group of youths in another part of Cambridge. 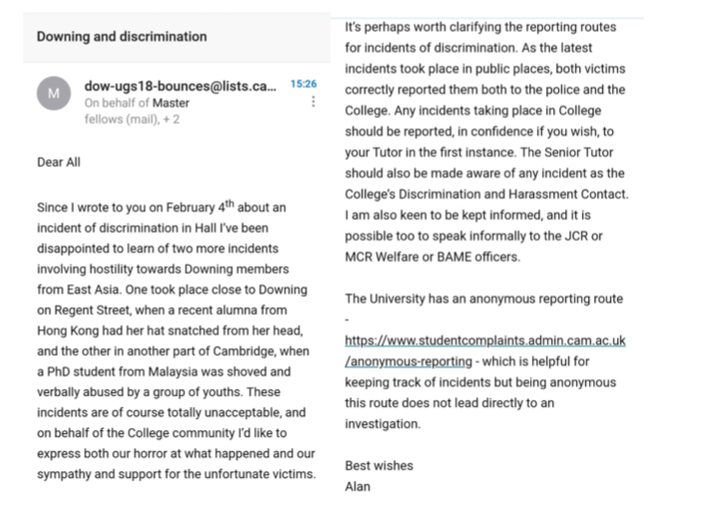 This follows a case of discrimination at Downing two weeks ago when a group of Chinese students were snubbed and subject to hostile remarks.  They were allegedly told they couldn’t eat at a table in the Hall despite there being empty seats.

Girton College students and staff also received an email warning about accusations of discrimination at the University generally.

On behalf of the College community, the Master expressed both “horror at what happened and our sympathy and support for the unfortunate victims.”

He went on to clarify how such incidents should be reported.  First and foremost to your Tutor, and he also mentioned that the Senior Tutor, as the College’s contact for cases of discrimination and harassment, should be made aware. He also drew attention to the University’s anonymous reporting route.