Dance with the devil all night

I was promised – or rather warned – that the 17th century play Doctor Faustus was going to be resurrected as a "satanic Friday night at Fez": and I was not disappointed. With Billie Eilish and Lorde's seductive techno-pop echoing around the theatre from the minute you walked in, the audience knew this would be nothing like the original play.

One glance at the stage and you realise two worlds are colliding: not just Hell and Earth, but also the Elizabethan period and our modern age. With the floor covered in dusty timeworn books lit by neon flashing lights, the radical contrast of technological advances underpinned the message of not only how fast time on Earth passes, but also how the concerns of humans in fact stand this test of time. The same worries of life, death, immortality, faith and morality trouble us now as they did Faustus and his contemporaries. Henry Dakin as lighting designer must be praised, turning the stage without warning into a rave and back again as if zoning in and out of hallucinogenic dreams.

A scene where Faustus recites a foreboding prayer in Latin became increasingly intense with the beat of the techno song throbbing in the background: you don't need a classics degree to understand what he's chanting will only bring disaster. However sometimes it seemed snippets of songs were played unnecessarily at times, creating confusion and without adding much effect. Often the music drowned out the voices of the characters who made no attempt to be heard over it. 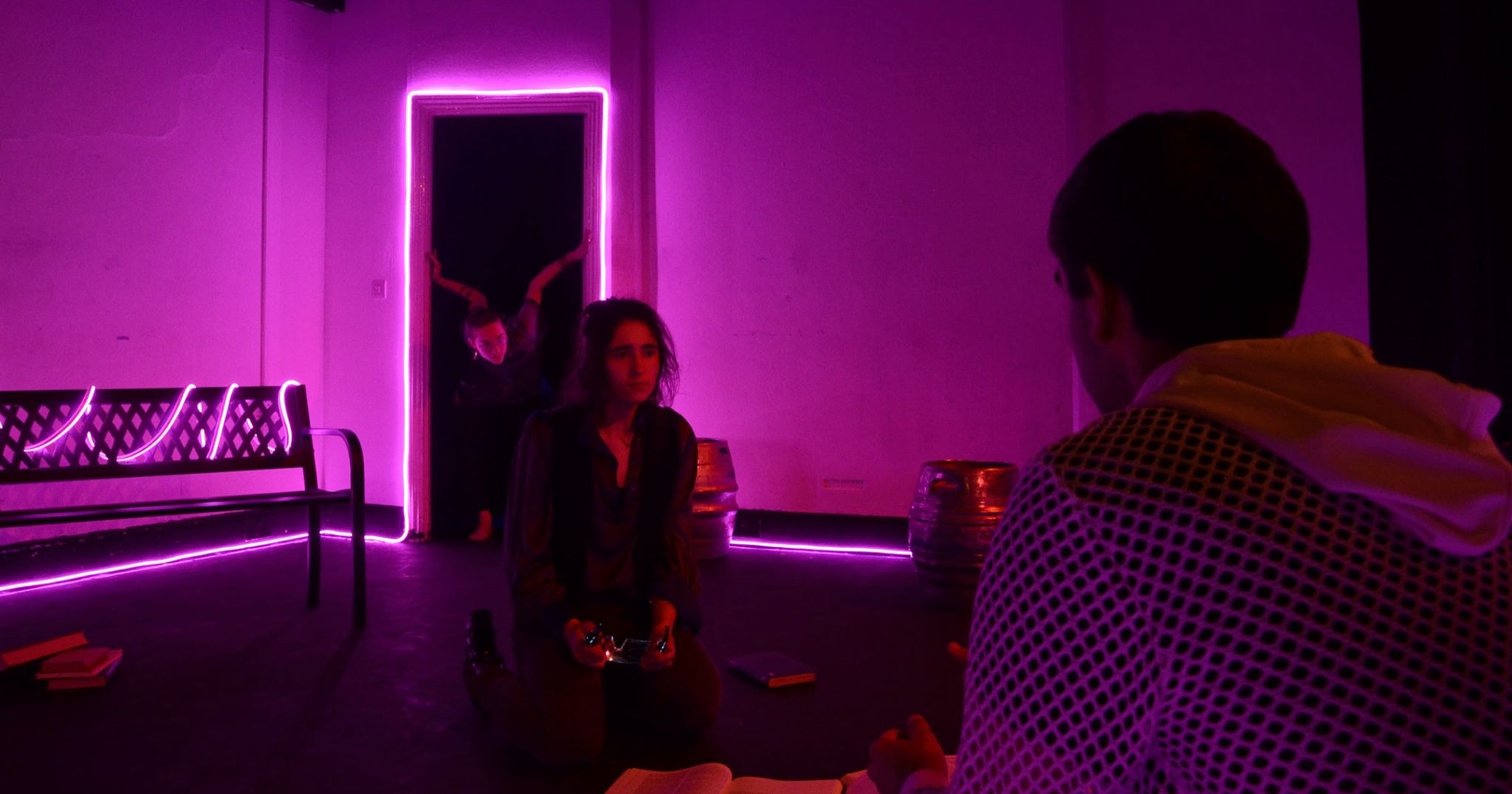 The special effects were a stellar and essential feature of the show. Moments like Mephistopheles snapping his fingers and fire instantly lighting up through a projection on the white walls of the set were extremely effective. You could almost feel the flames igniting Faustus's own passions, melting away his worries of damnation, where the audience couldn’t help envisioning the world which he was signing his soul over too, a microcosmic glimpse into the fiery depths of hell. Sometimes there were awkward delays with the timing of these effects, shattering the illusion of magic that was so well fashioned at first.

Lara Cosmetatos as Faustus certainly owned the stage from the very beginning pacing back and forth in animated thought, frantically picking up books from all corners of the stage, with an irresistible impulse to flip through every page, hinting at Faustus' insatiable hunger for more knowledge and power. Keep your eyes on Cosmetatos throughout the play and you’ll be rewarded with the most captivating facial expressions, whether she pops a cheeky tongue out in probing speculation or darts her eyes back and forth in frenzied thought. She brings an irresistible charisma to Faustus as he treats signing off his soul to the devil for unlimited power in a shockingly flippant manner, as if bartering with his DoS over an essay deadline. Surely when Faustus proclaimed "despair in God, trust in Beelzebub" so foolishly, it wasn't just me who ached to run onto the stage and shake him by the shoulders, begging him to abandon his plans.

The undeniable star of the show was Anastasia Joyce as Mephistopheles, who not once slipped out of her role, making your skin crawl the second she writhed onto the stage, her bodily movements splintered as if moving in sped up freeze frames. We were all thankful when Faustus ordered Mephistopheles to change his shape – it being so grotesque- yet when Joyce slinks back onto stage, though appearing ever so slightly more humane, her monstrous form as the demon cannot be fully contained, her head even seeming to be dismembered from her body at times whilst she growls and snarls. 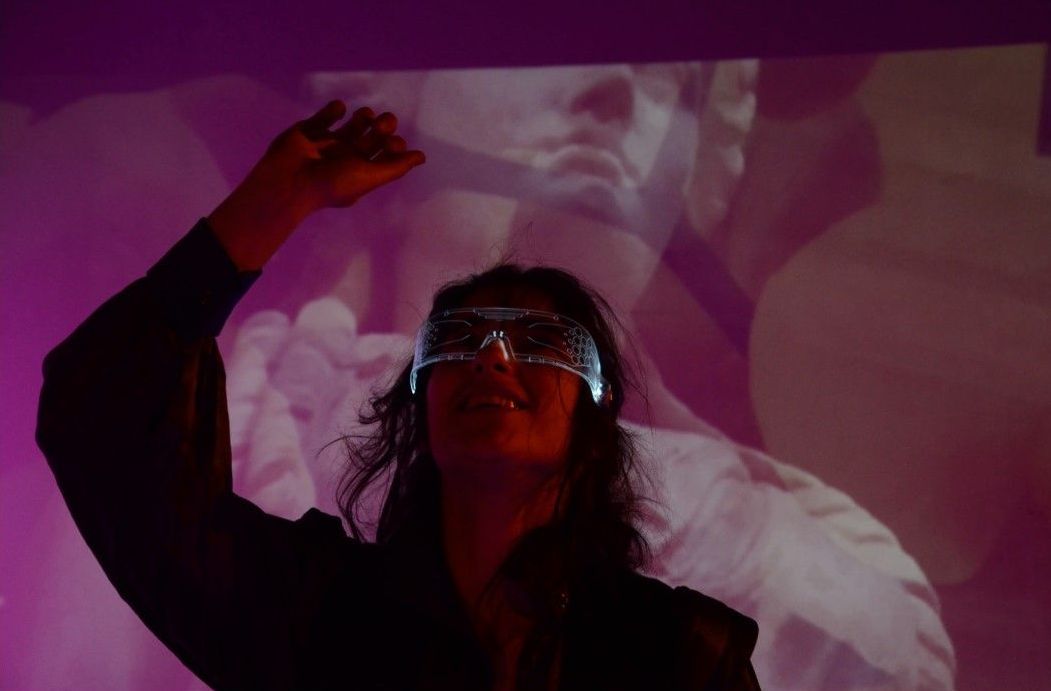 Moments of humour were brought out by Benjamin Gibson, relieving us momentarily in this tale of doom whilst Vee Tames was successful in playing a friendly companion of Faustus, chorus member and then a simultaneously charming and terrifying Lucifer. However, it must be noted that it wasn't clear what some of the actors' roles were, often switching quickly without much indication of who they were now playing, making the story line unfortunately hard to follow.

An unforgettable scene was the dance of the seven deadly sins. They came head-banging and thrusting their arms onto the stage, wearing glow-stick bracelets and party glasses. They compelled you to give into your worst desires. I could have danced with the devil and his spirits all night long. Faustus, delighted by the dancing around him, is a mirror to the audience, who is just as enthralled as us by the techno-pop and flashing lights, hallucinogenic and enticing.

The pitfall of the play was the editing of the script, which perhaps is not the production team's fault but Marlowe's- it seems to have cut out scenes that would have made Faustus' descent into hedonism and sudden regret more coherent. The fact that 24 years had gone by was not made clear however this might be proving the point that time on earth is insignificant compared to the eternity of the afterlife. It seems that the play's deadliest sin was its 17th century script which alienated the audience, making it hard to follow scenes. Perhaps the play would have benefitted from a script as revamped as the setting and music and lighting were.

These sins can be forgiven for the refreshing innovation of the play as a whole, pushing boundaries in an enthralling night of fear, temptation, disco lights. dancing and regret. Exactly like a Friday night at Fez. I feel that audience members already familiar with the play would make the most of this rendition, otherwise they’ll be left like me, having to read a summary on Shmoop afterward to make sense of the whole thing.