Students were threatened with a (plastic) machete

For the third year running, Pembroke’s Halloween formal has been disturbed by a spine-chilling spectre.

A sinister-looking clown barged into the middle of the four-course meal, standing at the entrance for about 15 minutes before proceeding to the top table. The nightmarish creature even threatened students with a plastic machete.

One witness told The Tab “The thing just stood at the door for a while then started walking down the aisle. When it got to me it started brandishing it’s machete, I thought that was the end. Then the butler approached it and the clown did a lap of the hall before leaving”.

Although the appearance of the clown silenced the hall, students quickly recovered from their fear, giving it a round of applause as it left Pembroke. The Tab contacted Pembroke, who declined to comment on the incident. 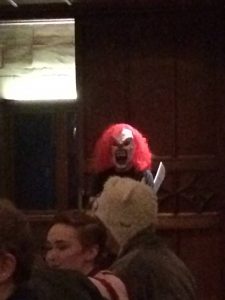 Even those Cantabs who thought their looming deadlines were the most terrifying thing facing them this Halloween weren’t safe. Another killer clown was sighted terrorising students in Girton library.

A petrified eyewitness told The Tab, “My heart was literally pounding. [He] scared the shit out of me.” She did manage to get a small measure of revenge on the menacing beast, gasping “so loudly” that he stopped and stared. 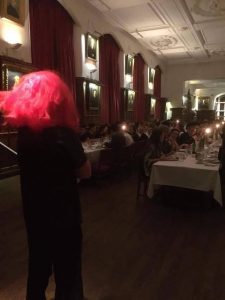 The photo may be blurry, but you can sense the fear in the air

There seems to be a curse on the Pembroke Halloween Formal. Last year, two second-years were kicked out for coming dressed as David Cameron and a pig. They re-enacted Dave’s infamous alleged oral sex act in Pembroke Hall, before the butler asked them to leave.

The previous year, a student dressed as Professor Quirrel from Harry Potter burst into the hall shouting “Troll in the dungeon!” A similar incident at Trinity was allegedly the cause of that college’s ban on Halloween formals. 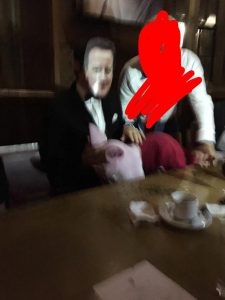 College had something to say

The killer clown craze started on college campuses in the US and quickly crossed the Atlantic. Despite sightings in universities around the UK, Cambridge seemed largely safe from the petrifying phenomenon until earlier this month. But it seemed that the creatures – who seem lifted straight out a childhood nightmare – have been waiting until October 31 to really come out of hiding. 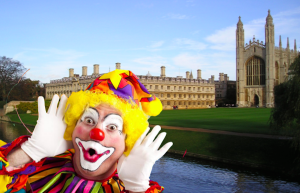 During October, Cambridge was invaded by dozens of killer clowns, with 44 incidents reported to police in a single week. Some were armed, carrying knives, machetes and baseball bats and many incidents taking place near schools.

Seen a killer clown or other terrifying apparition this Halloween? Send your stories or pictures to Tab Tips or [email protected]