A fiery anti-abortion exchange at the Freshers’ Fair is continuing to court controversy.

The spat between pro-life group Cambridge Students for Life (CSFL) and CUSU Women’s Campaign began with an accusation of what Women’s Officer Amelia Horgan described as a “homophobic personal attack” on a woman at the stall.

CSFL denies these claims, saying the woman involved “deliberately misinterpreted” the comment to discredit the group.

Horgan told The Tab that many students showed solidarity with the Women’s Campaign and were thankful for the campaign’s stance.

She said: “Our concern during the societies fair was to ensure that all students were warned about their presence, and to defend the Women’s Campaign’s commitment to bodily autonomy and reproductive justice.”

The Women’s Campaign posted trigger warning signs around the fair and were on hand to listen to anyone who were upset by CSFL’s stall. 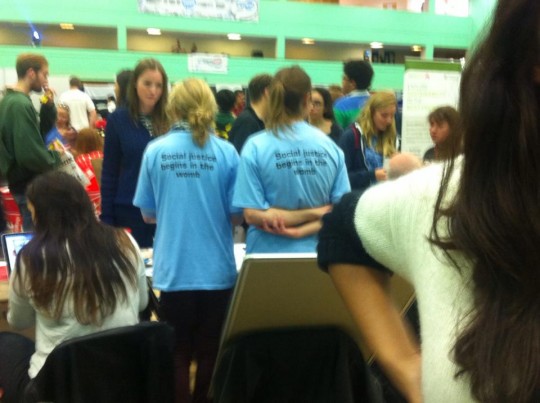 At least you can’t fault them on their catchy phrases…

Accusations poured out of CSFL talking to The Tab: “They stole our leaflets and stationery, blockaded our stall, lied about their identity, broke CUSU regulations.

“A female volunteer returned home in tears after a day of bullying from the Women’s Campaign.”

Crying over spilt milk? Should CSFL have even been allowed at the Fair? You decide.