UPDATE: Gilmour has been charged for violent disorder by police and is due in court on February 10.

The arrest has reportedly been made on counts of violent disorder and criminal damage.

Gilmour, the adopted son of Pink Floyd guitarist Dave Gilmour, has been making headlines worldwide for the last 72 hours after he was photographed swinging from the Union Flag on the Cenotaph in Whitehall.

Although he has not been officially named, it is widely suspected that the 35th arrest off the back of Thursday’s action is Gilmour. A Metropolitan Police spokesman said:

“On the morning of Sunday 12 December, a 21-year-old man was arrested at his home address in Sussex. He was arrested by officers from Operation Malone on suspicion of violent disorder, and attempted criminal damage of the Union flag on the Cenotaph on 9 December. He was taken to a Sussex police station where he has been further arrested on suspicion of theft.”

In recent days Gilmour has changed his Facebook profile photo to Caravaggio’s Boy Bitten By A Lizard, a painting often interpreted as representing a poisonous salamander triumphing over a God.

And this weekend it has been reported that during the protests on Thursday, the rock star’s son was seen carrying a volume of poetry and reciting the words of Byron and Keats to the riot police in front of him.

Gilmour’s actions have been met with a strong reaction in Cambridge.

Tab commenter ‘Disgusted’ said yesterday: “What an embarrassment for the university. He should be sent down. It’s absolutely disgraceful.”

‘Gilmour No More’ added: “Send the thing down and bang him up. Teach the man/woman a lesson!!”

Christopher Dobbing, a politics student at Pembroke, wrote to The Tab yesterday about the issue, calling for Gilmour to be suspended from the University. Dobbing said: “The law demands that those who commit serious crimes are punished, no matter what their excuses or reasons. This was a serious crime.

“I do not believe Gilmour to be worthy of the educations he is receiving, for he certainly has not made use of it thus far.  A year away from Cambridge to consider his actions and make up for the deplorable act should be strongly considered.”

Asked whether any disciplinary action would be taken against Gilmour, a University spokesman told The Tab: “The incident took place out of term time, in London, and is a matter for the civil authorities.”

The Telegraph reported this morning that Gilmour was also caught trying to start a fire outside the Supreme Court during Thursday’s demonstrations. 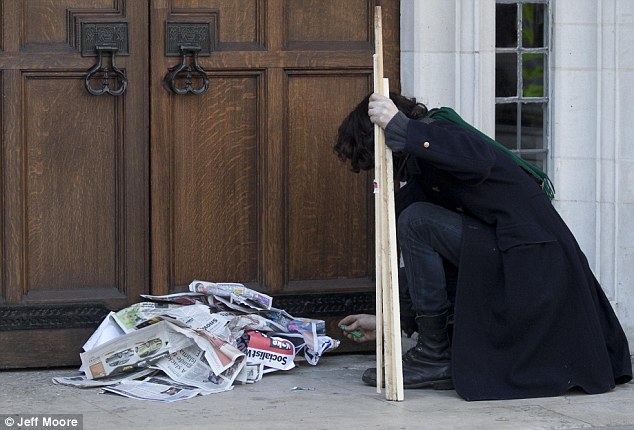 Gilmour up to his old tricks again, trying to start a fire outside the Supreme Court.

Thankfully other students alerted the police to Gilmour’s antics and they managed to kick it out before the fire could catch.

According to a police spokesman Gilmour has now been released on bail until June pending further inquires.

Meanwhile, it looks like the University could decide to take action against Gilmour.

Earlier today the University released this statement: “Following the release on bail of Girton College student Charlie Gilmour, the University Proctors are investigating their options and will be in discussion with the College authorities.”

They added, “No decision with regard to his actions has yet been taken.”