A topless man with washboard abs writes how he’s only “recently stopped counting calories,” whilst a St Andrews student admits posting “before and after” pictures of her eating disorder recovery was an easy way to getting more likes on Instagram. These, and countless other examples, are all brought together under the banner #ditchthedigits.

Inspired by the hashtag, people are deleting calorie counting apps, unfollowing influencers promoting meal replacements, and stopping comparing themselves to others. There are now hundreds of posts. "One girl posted that in challenging herself to do the campaign she didn’t count calories for the first time in her recovery, and was able to go out for a pizza with friends", says Jen Cohen, the brains behind the hashtag.

Yet, you might be surprised to know that the campaign was started in Selly Oak. Jen’s a third year English Literature student at the University of Birmingham, with 11.9k Instagram followers and is UoB's own BEAT Social Media and Publicity Officer.

I got the idea for this when I finally threw out my scales two years ago- because that was the major turning point in my recovery. Ultimately, removing my obsession with the number on the scale is what allowed me to eat again without guilt. The next step was giving up my obsession with calorie counting & food tracking apps, and allowing myself to exceed the calorie limit that I set myself for each day. // I then realised that it was far more than just food that revolved around numbers for me. I wasn’t just obsessed with my weight, I was also obsessed with perfect grades, how much money I had, how many friends I had (in real life and on social media?), how many boys were interested in me and how many I’d been with. Just one number, like a ‘bad’ grade, Had the potential to make me feel really shit about something that I previously felt good about. I could eat something and enjoy it, but then suddenly feel guilty because of how many calories it had. Or I could feel really good after a run, then realise I’d only done 15 minutes instead of 20. It was bizarre how much of my life, and indeed my self worth and sense of achievement, revolved around numbers. SO the key to being happy, for me, has been to eliminate their important from my life as much as I can. Those numbers will always exist, but they don’t have to influence how I feel or how I live – they certainly don’t influence what I deserve. // So yeh, I’m gonna #ditchthedigits because that’s my key to freedom from perfectionism and obsession. It will look different for everyone, but as part of this campaign I ask you to evaluate the power that arbitrary numbers can have over you. Try giving up their influence for a day- don’t check calories, don’t weigh yourself, don’t push yourself to do a specific number of reps in the gym… work based on how you feel Instead of always pushing for more. Try ignoring the OCD voice that tells you to do things a certain number of times over. Notice how nothing bad actually happens to you if you don’t! // I nominate @georgiepiex @noahslibson @justinesilber @georgerossrobinson @hopevirgo_ & @anya.golend to #ditchthedigits for one day and share their experiences??

Jen decided to begin the campaign after noticing how bound up her eating disorder was with her OCD traits and obsessive counting: "My eating disorder thrived off this constant desire to set rules and achieve numerical perfection, like reaching my goal weight, or only eating a certain number of calories per day.

"I found that my recovery was catalysed by throwing out my scales and ditching calorie counting apps. Removing my obsession with numbers has helped me to achieve freedom and positivity in almost every aspect of my life. It’s A LOT easier said than done, but the idea of the campaign is to challenge yourself to #ditchthedigits for one day this month and see how it makes you feel."

And it's not just about eating disorders. People have been sharing stories about comparing themselves to others using everything from number of sexual partners, to university grades, to likes on Instagram.

Jen says "It might be turning your phone off so that you don’t look at how many messages or notifications you have, ignoring OCD rituals for a day (or trying to!), throwing out scales. It might just be be conscious of how you might judge other people for their numbers (like how many people they’ve been with, how high their grades are, how much they eat or how often they gym). I’ve seen posts with the hashtag on Instagram, Facebook, blogs, and even YouTube videos!"

PLEASE READ: #ditchthedigits is an amazing campaign that @jenniferdcohen is doing, focusing on reducing people’s obsession with numbers and how they dictate lives. The focus on digits is very apparent in men’s fitness (calorie counting, weights to hit in the gym, your weight on the scales), and this is my perception on it (quite long but would really appreciate if you’d take time to ready): • Time and place: I have recently stopped tracking calories. I’m at a point where I’m happy with my physique, and therefore eat enough so that I’m happy with the way I look, and make sure I am enjoying my diet. This is also taking into account how I feel. Anyone who has done a serious cut knows that you start to feel pretty terrible and tired on low cals, so it’s important for me to get the balance between looking the way I want, and feeling good too. At the moment I’m at a place where I can do this without the need for tracking- definitely something to consider doing. • Obsession: As I keep stressing (outside of maybe contest prep), you don’t have to be optimum all the time. Tracking calories and weight can become very obsessive; so much so you start sacrificing things you really do not to be, and also feel guilty when you make a ‘mistake’. You’re weight will fluctuate naturally, so don’t get too caught up on what’s on the scales. Sometimes you’ll have bad days in the gym, strength isn’t always going to increase, it takes time. You may vary from you planned calories/macros- this isn’t going to change your body instantly. Going to be doing more posts about this campaign, but check outfor more information. Thanks for reading x – #ditchthedigits #lifestyle #bodybuilding #trainingmotivation #fitness #gains #lifestyle #aesthetics #arms #shouldersession #pushsession #explorepage #backsession #workoutmotivation #gymmotivation #mealplan #arms #biceps #diet #training

Posts have come from America to Australia to Selly, garnering hundreds of likes and shares. It's also helped to normalise many people's concerns around numbers. "A certain weight on the scale could ruin our entire day, that's how much power A NUMBER has been given", reads one post. "The focus on digits is very apparent in men's fitness" reads another.

"After that I just got really into campaigning because I was so frustrated with a lot of content I was seeing on my feed – influencers promoting diet and detox products, talking about reducing calorie counts and weight gain, and then the much darker side of Instragram actively romanticising eating disorders and self harm.

"I was equally frustrated with the stigma that I faced with people calling me withdrawn and lazy at university, when really I was just so fatigued and fed up that I didn’t have the motivation to get up. I wanted to show people that mental illness isn’t attention seeking or lazy – it’s not an easy way out of responsibilities or deadlines. It is the most debilitating and frustrating feeling. You feel like you’re stuck underwater whilst everyone else gets on with their lives above you."

I can’t accept that as a society we think that a numerical value holds more importance than our personal value as human beings. A literal number hold more significance than our health and happiness? A certain weight on the scale could ruin our entire day, thats how much power A NUMBER has been given. 10,000 steps a day – another number we have CONSTANTLY in mind – checking our progress throughout the day. Even the packaged food we buy has numbers PLASTERED all over it. On social media we believe our worth is based on the number of people who follow our profile or like our posts. So I beg you at some point in February to #ditchthedigits (campaign started by @jenniferdcohen) notice the things around you, the people, the scenery, make memories, find something you love doing, plan the future, do whatever sets your soul on fire. Remember that a numerical value cannot measure all the amazing things you are that numbers cannot define. !!!! ✨WE ARE SO MUCH MORE THAN A NUMBER✨

I asked Jen about looking after your mental health at university, where these intrusive thoughts about numbers are at their strongest. "Don’t be afraid to ask for help. I know that sometimes it feels like a personal failure to speak to welfare, ask for an extension, go to therapy or go on medication. But, if anything it’s really a personal victory to be self aware enough that you can ask for help when you need it. Nothing is ever ‘not severe enough’ to warrant help – and no one with anxiety has ever been perceived as ‘taking advantage’ of the system.

"Also if you need to take time out from your studies, don’t rule it out because it’s inconvenient. In my experience the university is normally very helpful, and this is often the best way to aid recovery … once you start working it becomes a lot more difficult to take time out for your mental health and still be supported."

Jen is Social Media and Publicity Officer for BEAT UoB, the Guild's own branch of the national eating disorder support charity. She's helped on multiple campaigns, particularly with this week's Sock It to Eating Disorders campaign. Members of BEAT will be handing out socks and information at the Bournbrook crossing Monday-Wednesday, encouraging us all to say sock it to eating disorders. 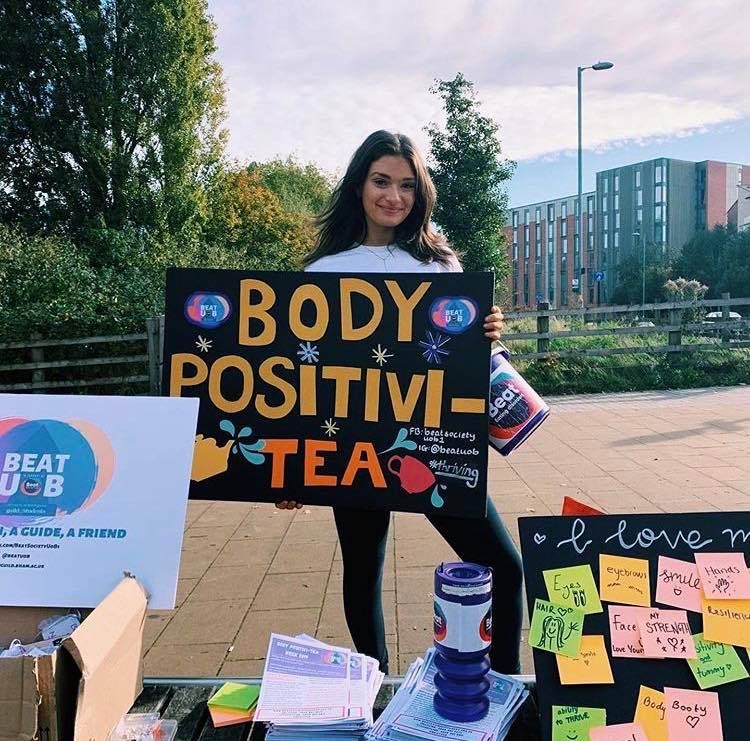 Jen notes that you don't have to have a diagnosable mental health issue to get involved, "It’s really a social media based campaign, so if you'd like to get involved, write something about your experiences with numbers and how they influence your life and wellbeing, and how it feels to give up their influence for a day."

If you need support for mental health, you can contact Birmingham Nightline.