You may have seen an MEP is banned from speaking on Sussex campus. He isn’t

The full story hasn’t been revealed

The Sussex Students' Union has made national news due to debating society, Liberate the Debate, claiming that the union is restricting free speech.

Bill Etheridge, a UKIP MEP, was set to talk on Sussex campus on November 3 about free speech and Libertarianism.

Now, the event isn't going ahead on campus, with Etheridge calling the SU "tinpot dictator socialist luvvies, pinko subversives," and Liberate the Debate claiming what had happened was “no-platforming under a different name”.

But the full story hasn't been told. Liberate the Debate cancelled their own event.

The SU have said Etheridge “is, and always has been, welcome to address our members”, and that they've been “working hard” to “ensure the event can go ahead.”

The risk assessment conducted by the union for every external speaker found the event was medium/high risk.

Mr Etheridge has previously been criticised for describing Hitler as a “magnetic” and “forceful” speaker, for advocating the death-penalty, and a Burka ban in a leadership bid which followed Nigel Farage’s resignation.

Controversial external speakers at Sussex University have also faced violence before. Nigel Carter, a UKIP politician, was pelted with wet toilet roll in 2015 and Tory MP, Mike Weatherley, was attacked with rocks in 2012.

Thank you so much for covering our current situation. Our first event gets hijacked, you can’t make it up. #FreeSpeech https://t.co/pG2lfIkHko

Despite safety concerns, the SU decided the event could go ahead, subject to safety conditions.

This was communicated to Liberate the Debate, in an email saying that the event could go ahead, and "outlined regulatory steps that would go into making the event as successful," says Lucy Williams, the SU Activities officer who is also a member of Liberate the Debate.

The main measures the union wished to enforce were to look at the speech Etheridge was due to use, ensuring a academic was on the panel to provide balance and analysis to Etheridge, to be a Sussex students only event with student cards as a condition of entry, no filming of the event, and for security to be present to make sure the event goes smoothly.

Liberate the Debate did not reply to this email, instead cancelling the event due to the union 'prohibiting' the event. The event has not been banned.

In addition, the measures that the union have to put in place are processes that are applied to all external speakers.

One issue Liberate the Debate flagged up was the issue of raising funds for their security, with Vice President Edward Seccombe writing in a blog post: "the Students' Union expect our society to cover the necessary security expenses."

However, the email reads:

"Due to some previous comments of the speaker being considered quite controversial – for the speaker's safety more than anything we will have to inform University of Sussex security and we will expect a presence at the event.

"Please note that if this results in any cost, funds will need to secured to cover that cost. If this is the case, please come and speak to me and we can discuss the options."

After speaking to the Vice President of the society, he assumed that this meant the money would have to be raised off their own backs. Edward comments:

"Making us pay thousands for security is basically cancelling the event."

The activities office of the Students' Union denies any assumption that Liberate the Debate were to raise the money themselves, and assert that the society would have been aware of this. The option to apply for society funding and even to utilise the officer budgets were always available to the society to use. 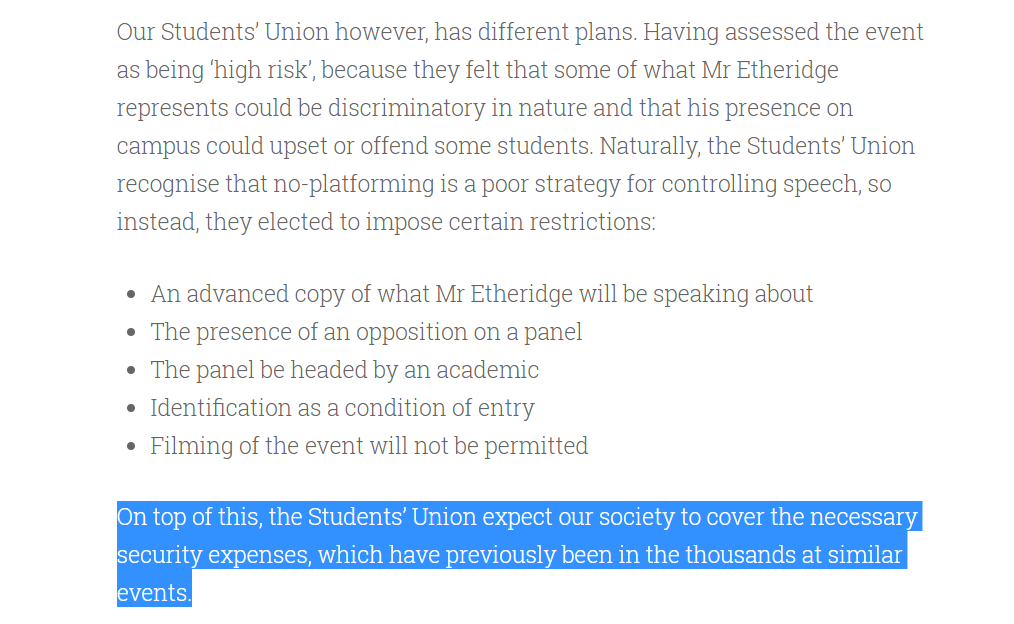 Continuing on the issue of paying for security, the presence of security can be legitimised due to the history of violence against external speakers at universities.

"There has been occasions where a minority of radical students have elected to use violence against those they disagree with.

One would then assume the reason security are there in the first place is to make sure those who are committing violence are caught and punished.

The event now no longer has a venue, after another planned venue "pulled out in fear of protest". Instead, the event is suggested to be held in Stanmer Park.

The SU have confirmed despite the situation that they are more than happy to allow the event to be held on campus providing that the previous measures are met.

Reiterating this, Lucy Williams, the Activities officer said: "He is welcome to come and speak at Sussex Students’ Union.”

It’s the first time a UK university has done this