An ode to St. Feuddrews: A love-hate relationship

I'm running the risk of sounding like I don't have a life by saying this, but St. Feuddrews genuinely makes me laugh. Sometimes hysterically. I will, more often than I care to say, be sat in the library at 11:30 pm, procrastinating by scrolling through my Facebook feed and be laughing to myself at St. Feuddrews posts. I don't know if you've ever spent time scrolling through mindless articles on the Mail Online website, and then read the comments underneath, but it's a good way to spend a hungover Sunday morning, and St. Feuddrews is much the same kind of deal, only local.

Not to call it mindless in any way. Students are a sucker for university wide Facebook pages, see 'St. Andrews Crushes 2.0' (RIP), and its successor, crushes page 3.0, and 'St. Memedrews'. They make us laugh, they're relatable (to an extent), and more often than not they're an excuse to publicly humiliate your friends.

I call my view of St. Feuddrews a 'Love- Hate relationship', because there are some aspects which are indeed, all of the above. They're funny and relatable and do indeed address things which also annoy me about this town. For example, there was one posted on there the other day which simply said, "Hemmorhoids". Tell me that doesn't make you laugh just slightly. One about drivers not indicating on the Bell Street junction, which does indeed make our trips to Tesco just that little bit more perilous. Or a good old bit of Edinburgh Uni bashing (see below): 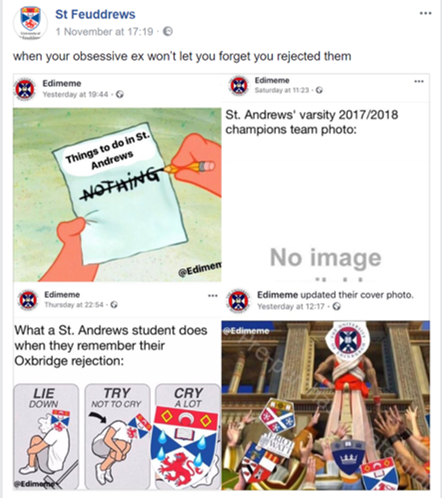 On the flip side, there is a darker side to this complaints page. In recent weeks there have been calls to shut the page down, due to the increasing number of posts concerning anti-Zionism and antisemitism, feuds between locals and the so-called 'elite' student body to name but a few. It is for this reason, it has become a source of controversy and is perhaps becoming it was never intended to be by the people who run it. It is by no means a fault of their own that posts deemed offensive get onto the page. We're all busy, we all have deadlines and naturally the page is going to receive a barrage of submissions so it's hard to filter them all.

It seems because of the level of anger that is coming through on this page it is becoming something that it's not supposed to be. It was supposed to be a bit of fun, not somewhere for people to throw around accusations and belittle people for their beliefs. It's almost sad that this is the way that people are voicing their opinions on relatively serious issues, via a facebook site set up by students as a bit of a joke. It was once funny, however now it's just clutter, the odd inside joke, and some furious locals

Also credit to whoever put this one up: