Interview: Brendan Lynch, the Billy Elliot of the Baking World

It’s a well known fact that The Great British Bake Off is the best show on telly. The Stand was lucky enough to chat to contestant Brendan Lynch to find […]

It’s a well known fact that The Great British Bake Off is the best show on telly. The Stand was lucky enough to chat to contestant Brendan Lynch to find out why.

Unless you’ve been living under a rock recently, you’ll be aware that The Great British Bake Off has become the must-see programme of the week. And yes, I am including Downton. The idea of competitive baking combined with James’ Fair Isle jumper collection has us all salivating in front of our TVs every Tuesday night. But while James may win in the style stakes, our favourite contestant at Stand HQ has to be the fantastic Brendan Lynch.

Last week’s episode attracted nearly five million viewers. Why does Brendan think it has become such a phenomenon? “It is a reality TV show and there are many of those around,” he admits “but what sets the GBBO apart, from programmes like X Factor or Masterchef perhaps, is its delicate balance. It’s suitable for youngsters from about eight years old up to eighty. It’s a nice family program and, yes there’s tension in it and there’s pressure and  people have to leave and there’s tears and so forth, but it’s done in a dignified way and nobody’s ‘harmed’, shall we say, in the process. I think that accounts for a good deal of its appeal. And of course just the whole formula, you’ve got two very opposite judges in Paul Hollywood and Mary Berry.”

Agreed, and speaking of judges, who is his favourite? “Oh dear. Well Mary… of course you’re going to be attracted to her because she’s always gracious and there’s a charm and politeness about it all and encouragement and so forth. Paul will simply judge what’s in front of him. He doesn’t take into account you know… much of your feelings. And it showed actually. I think they [the producers] had to have words during some of the shows because some of the contestants’ feedback was too blunt. On camera, they would look like they’d accepted it and then you’d see them go off and humph their hearts out in a corner somewhere. And yes he would go and make it up with them, but there was no need to be quite so brusque sometimes. But no, I think Mary would always win hands down.”

Brendanites were appalled last week when the man himself was on the receiving end of said brusqueness when Paul was particularly harsh about his exquisite gingerbread bird house in the Showstopper Challenge.  “Do you know what’s interesting about that is, during the programme when we were watching it [on TV], Paul tweeted to say that his comments were too harsh about kicking house-doors in, which he didn’t really mean.’” Brendan stands by his birdhouse – “I wanted to create something that a mum and her children or a whole family could do. I mean the Colosseum that John made was impressive, but who on earth is going to sit down and make a Colosseum?” – and in the end, Brendan’s had the last laugh because the recipe will be appearing in the series companion cookbook and will feature in an upcoming issue of the RSPB (The Royal Society for the Protection of Birds) magazine. “So I did triumph even if I didn’t triumph on the programme”.

Birdhousegate is not the only run-in Brendan has had with Paul. During one of the technical challenges, “Paul mentioned I was influenced by the 70s and to be frank with you, it rattled a little bit because I couldn’t remember the 70s that well!  It was only that one comment but it seemed to stick with me for a while. It irritated me enough to want to make sure I put in some modern twists here and there. What I found funny about the technical challenges is that most of them were from the 70s; crème caramel and rum baba and such things that people had completely forgotten about. It was odd that I should have been said to be 70s influenced when it was really the technical challenges.”

But, despite these accusations, Brendan has become star baker twice, tying with James, on the way into the semi-finals. What’s the key to success in the programme? “To be successful, I think in each episode, you need at least two good bakes i.e. your signature bake and the showstopper bake. The technical challenge is always a wild card; you never know what’s coming at you, so you rely on instinct and have a go. You can not do very well in that, but you must do well in your signature bake and showstopper.”

It’s not as easy as it looks to keep cool under the pressure. There are around fifty-five crew swarming around in the baking tent and there are constant interruptions from journalists, judges or presenters asking questions. He found it “very distracting” and had to develop a technique of putting ingredients to go in on the right, and ingredients that had been added on the left to keep himself on track. It wasn’t until week three that he started to “take off” and enjoy it.

The fifty-five crew members and journalists were also the key in solving the mystery of who eats everything afterwards. After the contestants have been judged, they are whisked away to do interviews and when they return they are left “looking at crumbs”. Unless it’s one that Paul has marked off! 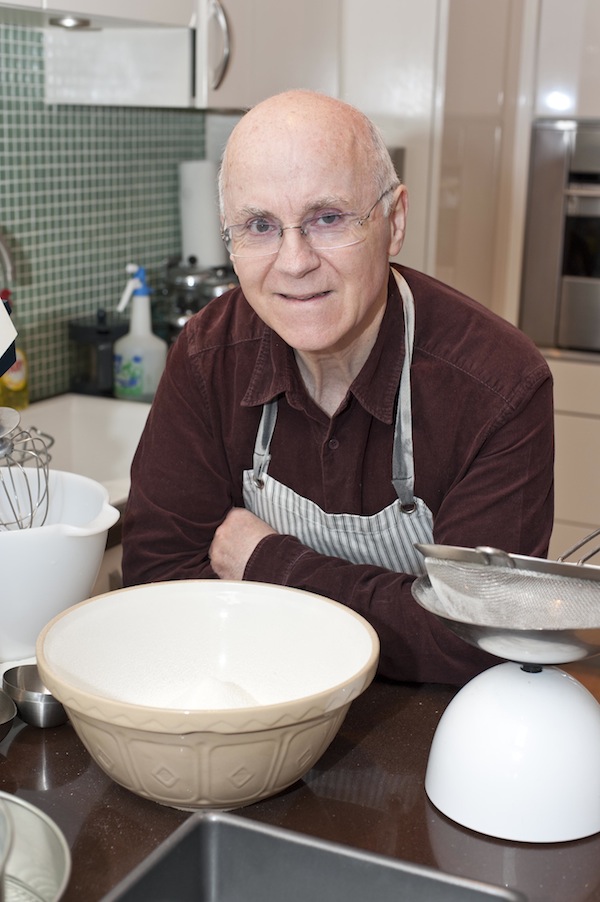 Flour Power: Brendan and his bowl

With Brendan’s stellar record on the programme, it’s hard to believe he’s self-taught. His mother died when he was eight, leaving eight children. The eldest four soon moved away and his remaining sister would bake for the younger ones. “I remember once, at 11 or 12 years old, having a go at making an apple tart without any guidance or anything. I hadn’t seen any books but I’d heard of them so I just put some flour and water together and rolled it out with a milk bottle and put it on a plate and cut out some apples and sugar and rolled another disc to put on it. It must’ve been disgusting, I must say. That was my first attempt at baking. But, and it’s a touch of the Billy Elliot here, boys didn’t do that kind of thing. Cooking and baking was a girl’s thing to do so it was quickly stamped out and it wasn’t until my twenties that I picked it up again.” The spark was re-ignited after purchasing a Raymond Blanc cookbook. Brendan would phone up his restaurant to ask advice on bakes that had gone wrong and then practice until they looked like the photograph.

But, that’s Brendan all over. He has been passionate about baking for over thirty years now. In his own words, “he’s not a dabbler,” and insists, “if you’re going to undertake something, do it well and do it to the best of your ability”.

So with that in mind, will he make it to the finals? Well, that would be telling now wouldn’t it?

Favourite bake of the series was the tangerine and orange torte made with notoriously difficult chestnut flour.

If he could only bake one thing for the rest of his life it would be bread.

Tips for aspiring student bakers: start off spending a couple of months mastering one thing at a time until it’s perfect.

Is a keen gardener and has designed over 40 gardens.

Is on a mission to bake all the breads in the world and has so far managed 100.

He is just as charming and lovely on the phone as he is on TV.

How does he rate the other bakers?

James? “Delightful man”; will be “outstanding as a doctor”; suspected to be sponsored by the Scottish tourist board because of his penchant for whisky

John? “Showed flashes of brilliance on a number of occasions”

Cathryn? “Has some great ideas and freshness in her approach”