With 204 racers happily signed up and the gift of time now on their side, the Charities Committee Race2 team has decided to take on a brand new exciting entrepreneurial […]

With 204 racers happily signed up and the gift of time now on their side, the Charities Committee Race2 team has decided to take on a brand new exciting entrepreneurial venture:  Race2 Swapshop.*

Inspired by the entrepreneurial flair of Canadian Kyle MacDonald, who managed to barter his way from a single red paperclip to a house in a series of online trades in just a year, the Race2 Committee decided to try their hand at their very own swap-shop challenge, all in the name of charity. Over the course of his year-long adventure, and from the seed of the humble red paperclip, MacDonald managed to acquire such amazing offerings as a Toronto recording contract, an LA film role and an afternoon with Alice Cooper (to name but a few examples) on the road to his procurement of a two-story Canadian farm-house.

Paperclips are quite hard to come by in the Charities Office, however colouring pencils are in abundance. That decided our starting item; 12 pencils were dished out to the hopeful Race2 Committee Members and off we set, ready to swap them up for more desirable items that could be sold for charity or given as prizes. I must admit, I was a little dubious that I would ever succeed in swapping my pencil for anything of greater value- after all, I have no estranged links to any record labels, film companies or Alice Cooper. The closest celebrity link I could muster was a cousin with a longstanding friendship with Hannah from S Club 7- an avenue I thought perhaps best left unexplored.

Luckily, I was able to turn to trusted friends for help, and very quickly managed to trade the pencil for a rather fetching golf umbrella, courtesy of the ASC. Now I knew just the person who was desperate for one of these… although I didn’t realise he was a 17” Samsung flat-screen TV with additional Philip’s Freeview Box desperate. That’s right, pencil to TV and freeview box in two swaps. I couldn’t quite believe it either. It seems a cheeky smile, the word ‘charity’ and a particularly rainy spell of weather had helped me a little way along the adventure inspired by MacDonald’s red paperclip (ironically these are the best conditions to help ensure success for hitch-hiking racers too.) 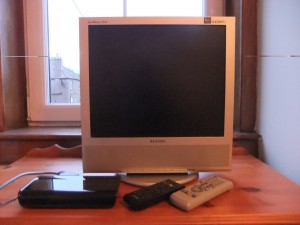 Other items procured through the swapping of pencils by the rest of the team include a BBQ, a sledge, a mobile phone, moisturiser, soap, board games, wine and dinner vouchers- while there’s no house (and not even any rock stars, or S Club 7 members for that matter) in sight, it’s definitely not a bad effort for three week’s work and with two and a half months of swapshop fun still to go.

Admittedly, the swapshop challenge hasn’t been so plain sailing for all of the team… one of our team members somehow managed to be tricked into giving up his pencil whilst receiving no item in return. We’re hoping that whoever borrowed ‘old blue’ will return it soon.

Going from paperclip to house is definitely not as impossible as it once seemed. A bit like hitch-hiking across Europe for free… before taking part it’s hard to believe, yet hundreds of racers manage to do it every year and have the time of their lives along the way. I know what you’re probably all thinking now you’ve made it to the end… you’ve been overcome by the inspirational journey of the pencils and the charitable goodness they represent… so now you want to swap your Macbook pros for the sledge and wine? That’s great news! Drop us an email on [email protected] and we’ll get back to you.

For more information of the Charities Committee’s fundraising, click here.

*In a similar vein to the swapshop, the Scottish Institute for Enterprise recently hosted a mini Bigger and Better Competition. Teams were given one badge and two hours and sent away to trade for something bigger and better. The trade’s went something like this:

A pin for a magazine for a book for a flask

For more information on the the Scottish Institute for Enterprise and its Big Ideas Competitions, you can contact Molly at [email protected] or join their facebook group.